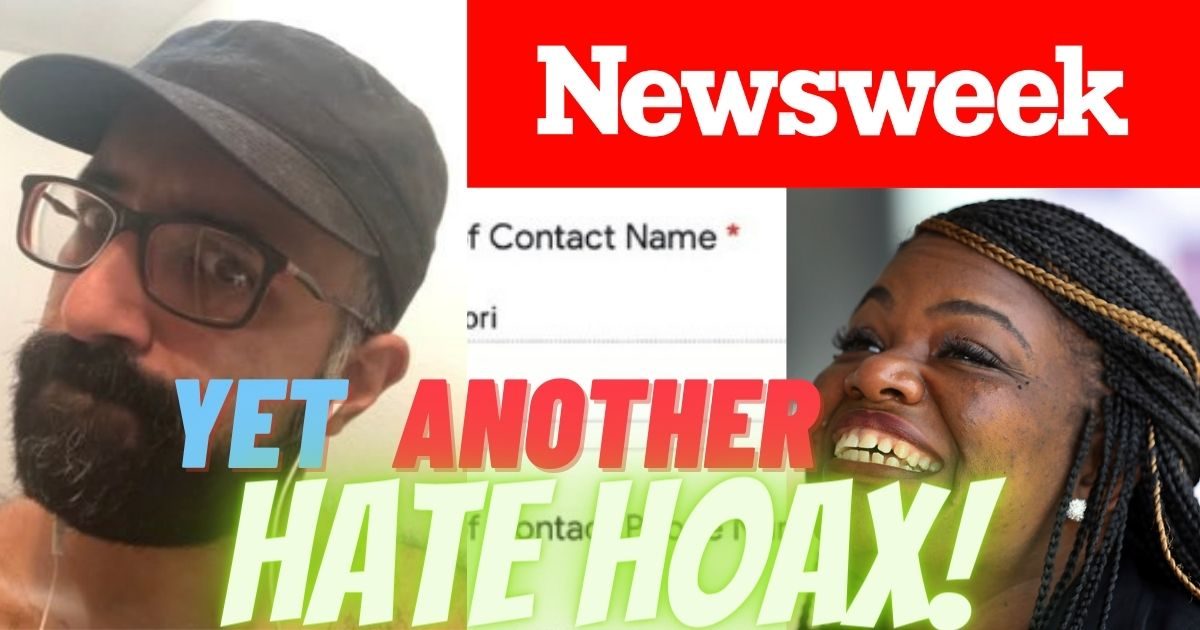 Leftist Rep. Cori Bush posted images to Twitter of alleged ‘white supremacist violence’ where someone wished death upon her, among several other supposed threats. [1]

Daily Wire journalist Amanda Presto noticed the obvious flaw in Rep. Bush’s supposed threats: they were clearly unsent. [2] The threats were sent in a Google form, and when the form has not yet been sent, a red asterisk appears next to a required section that has not yet been submitted. Note the asterisks, and the lying.

Meaning that someone screenshot answers and sent them to Bush, or she screenshot them herself. Cassandra Fairbanks at the Gateway Pundit did an excellent rundown of this situation. [3]

Faking a race crime is surprisingly common. The most famous recent example was Jussie Smollet who, while in Chicago as a relative b-list celebrity, said he was attacked by two MAGA-hat wearing white men at 2am while walking back from Subway, who proceeded to put a noose over his neck. It later turned out that Smollet had paid two African men to noose him, and that it was all a ruse for attention and media glamour. [4]

Tawana Brawley faked an abduction, rape, and assault in 1988 trying to blame the local police and alleged a cabal of evil white racist cops were out to get her. It was all fake. [5]

In 2017 a black Georgia State Representative Erica Thomas tried to fake a hate hoax by claiming she was yelled at by a white male who told her to ‘go back where you came from’ for bringing too many things into the express lane at the grocery store. It turned out the man wasn’t white, was liberal, and Thomas was the one who told him to go back where he came from! [6]

A 2018 hate hoax at Smith College in liberal Massachusetts went after janitors because they dared to kindly ask whether someone violating the rules was aware they were not in the right place. [7] The 2020 hate hoax at NASCAR involving Bubba Wallace was a controversy over a garage pull down rope that was said to be in the shape of a noose. [8]

There is no way to assess the modern power dynamic in America and come to the conclusion that it is easy for whites to threaten blacks with violence. If anything, even the most minor of what are amusingly termed “microaggressions” can end the several-decade career of many whites for looking the wrong way at a minority.

So when Newsweek runs this story, about a sitting Congresswoman, an incumbent lawmaker, receiving anonymous threats online, there is no only the recent history of incredible hate hoaxes proven false in time, but there is the oddity of a Congresswoman in a seat that Democrats have held for 72 years, engendering the kind of militant opposition from motivated ‘white nationalists’ that they would send in Google forms threatening the lives of politicians.

It’s absurd, and just checking the comment thread under Rep. Bush’s original post would have given Reporter Villareal enough doubt and skepticism about this story to at least reference those doubts in the story.

A reporter may not be able to determine whether a story is true or not, since investigations take time and money, but they at least owe their readers a duty to inform them that there are good faith doubts as to the claim’s authenticity.

Readers are also owed some basic context as to the history of these kind of claims, which are often overblown and overreactions to people blustering in an email.

The last two Congressmen who were arguably killed on the job was Larry MacDonald shot down by the Soviets on Korean Air 007 in 1983, and Leo Ryan, shot by the maniacs at Jonestown in 1978. So in nearly 40 years, no one has been able to kill a Member of Congress even though they are very public and at many public events and functions all the time. [9] The likelihood that these threats are serious and credible is, frankly, very low. Even if they were real, which this one clearly is not, they represent the ravings of the mentally ill.

Instead, Newsweek participates in this obvious smear of people they don’t like with an anonymous unsourced claim of dubious origin. When disliked people don’t produce the threats they imagine, they can just produce them themselves. They rely on journalists to do the most superficial investigation of the claim and to then praise them as victims during this difficult struggle, locked into one viewpoint out of ideology and political correctness. It’s such a common playbook, and the consequences are non-existent, so expect more of this kind of journalistic malpractice not less.

Reading through the biography of the author, Daniel Villareal, it also becomes apparent that his goal is not to report at Newsweek or to fairly and honestly portray these topics, he is just an activist in the guise of a journalist. [10]

Don’t expect any corrections to this Newsweek article when the story implodes further, this one will probably just get memory-holed like the rest of these hate hoaxes.