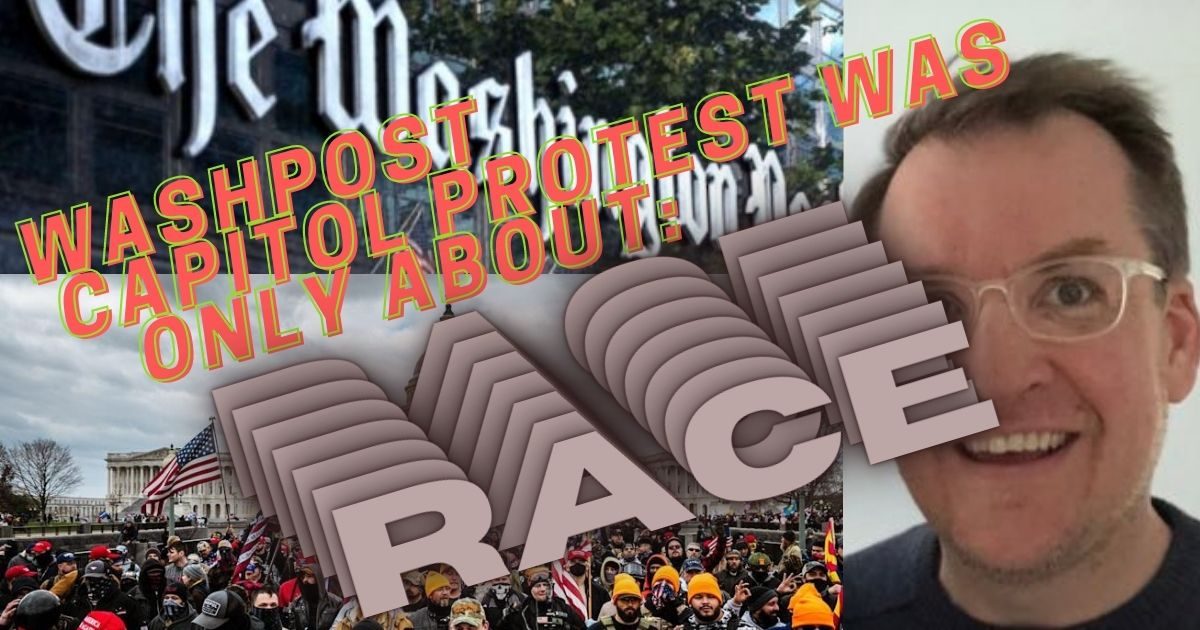 Philip Bump is a disgrace to the Washington Post, and the fact he’s providing ‘analysis’ on political issues should make you question a lot more at the Post.

He describes the January 6th protesters as a virtual tsunami and then cherry-picks quotes from BLM-connected Capitol Police officers in order to make the entire crowd a sea of racism. The Officer in question has serious credibility problems, and if racial abuse was that common that day, you would think Speaker Pelosi would be more willing to release all the surveillance footage that would prove it conclusively, which she refuses to do.

The wave pushed over flimsy barriers before slamming into the line of police, then rushing through the windows and doors behind them into every part of that capacious building — washing into every corner before draining away.

Let’s just get a few things out of the way.

First, the crowd did not ‘slam into the line of police’ – a group of pro-Trump individuals had assembled at the Capitol to hear a speech by President Trump. They were then attacked by the Capitol Police with wildly disproportionate force.

Capitol Police deployed batons, rubber bullets, mace, tear gas, flashbangs, all before anyone had entered the Capitol complex. They were not some peaceful beach that the Trump tsunami crashed down upon.

Second, the Trump protesters did not “rush through the windows and doors” – there were very limited access points. The number of windows broken has not been released by the Architect of the Capitol, even though the Gateway Pundit has asked repeatedly for the basis of their damage estimates. Even without questioning their figures, the government estimates damage was $1.5 million to the Capitol. [1]

The Architect of the Capitol later inflated that damage estimate to $30 million. [2]

By comparison the protests over George Floyd were in the $2 billion in damage range [3] though some estimates claim the actual damages were much greater. [4]

The published inventory of damage as given to the New York Times was light on substantive damage other than a few broken windows and the remnant of tear gas used on protesters. [5]

Damage to the interior of the building was largely limited to broken glass, busted doors and graffiti, the report said, though it noted that statues, murals and historic benches displayed the residue of various pepper sprays, tear gas and fire extinguishers deployed by both rioters and law enforcement personnel. They will need to be carefully cleaned and conserved, the report said.

Later in the New York Times article they clarify where protesters had entered the building:

A mob broke into rooms on the south side of the Capitol (including House Speaker Nancy Pelosi’s office), smashed windows and then marched through the National Statuary Hall, waving American, Confederate and “Trump Is My President” flags.

Vandals in red “Make America Great Again” hats, many of whom photographed and recorded themselves, wreaked havoc in Congressional offices and the Rotunda.

Were protesters inside the Capitol? Yes. Did they get to highly symbolic places such as the Rotunda, Statuary Hall, and briefly the Senate Chambers? Yes.

Did they get to “every part of that capacious building — washing into every corner”? No.

BUMP CLAIM RATED FALSE: January 6 protesters got into every part of the U.S. Capitol.

Bump then claims that the Capitol Police heard a variety of racial epithets and abuse directed at them.

Here are the officers who heard abuse hurled at them according to their sworn statements:

Harry Dunn — “That prompted a torrent of racial epithets,” Dunn testified. “One woman in a pink MAGA shirt yelled, ‘You hear that, guys? This [racist slur] voted for Joe Biden.’ Then the crowd, perhaps around 20 people, joined in screaming, ‘Boo! [expletive] [racist slur]!’”

[Dunn] later added that other Black officers at the Capitol that day had experienced similar disparagement.

“Another Black officer later told me he had been confronted by an insurrectionist in the Capitol,” Dunn said, “who told him, ‘Put your gun down and we’ll show you what kind of [racist slur] you really are.’”

Aquilino Gonell –  Gonell is a native of the Dominican Republic and a naturalized American citizen. He served in the military before joining the Capitol Police. But he, too, testified that he faced racist abuse that day.

“Apparently they seen, even through my mask, they saw my skin color and said, ‘You’re not even an American,’” Gonell said. “Regardless of whether I was in the military, they don’t know that. But they— yelling and saying all these things to me.”

Michael Hodges is not a minority, but he testified to Congress that he heard much of the same racial abuse as Dunn and Gonell suffered.

…he noted that nearly everyone he saw at the Capitol that day was White, and that white nationalist organizations had been in attendance.

It’s always strange to me when leftists who will rant and rave for days about how race is just a social construct seem to have a perfectly calibrated sense to determine whiteness in a crowd.

Let’s practically ask: how could you determine that everyone you saw was white and that they were members of a white nationalist organization?

What is a white nationalist organization? Do they have members? Can they accept dues via Visa or Paypal?

If you were to review Wikipedia’s list of supposed ‘white nationalist organizations’ I suspect that one would be unable to determine whether anyone is a member of any of them. [7] Do these groups have memberships? Do they announce themselves like the Girl Scouts selling cookies when they meet new people? Even new people who are opposing police officers at a protest within the U.S. Capitol?

Imagine if you took all the groups that a left-wing person belonged to, and imposed collective guilt upon everyone at a rally or within an organization as a result.

Imagine if you were a black nationalist, a racist, and proudly supported not only Black Lives Matter and thought that the violence in Kenosha Wisconsin didn’t go far enough to avenge black lives. If you laughed when the President was rushed off the stage due to a pending attack. If you had those beliefs and were part of another group, would those noxious views extend to indict the rest of your group?

Harry Dunn better hope not, because he has espoused those views as documented by alternative media and aggressively suppressed by mainstream media. [8][9][10] pictured: a lack of credibility

Is this a person who deserves to be believed when saying that he suffered racial abuse from a large crowd, when he is the primary witness for these statements?

Black leaders have long used similar tactics: claiming racial abuse when it did not occur, because proving a negative is so difficult. In 2010, Representatives John Lewis, Andre Carson and Emanuel Cleaver said they were called the ‘n-word’ some 15 times while debating Obamacare by Tea Party Activists. After weeks of reviewing audio and comparing newsfeeds, offering rewards for audio proof, it was proven false but it served its purpose: silence political dissenters by making false claims about racial abuse. [11][12][13]

Aquilino Gonell also described verbal abuse, but what do the words actually mean from what he relays? He said he was called a ‘traitor’ but does that imply anything racial? The protesters could have felt he was being a traitor to the Constitution. And the statement that “he’s not even an American” Gonell wants us to think that this is a racial statement by someone who looks through his mask and shield to determine his ethnicity and, by extension, nationality. Or is it reasonable to think that a group of pro-Constitution activists might say he’s not a ‘real American’ because he was fighting the pro-Trump protesters? Maybe it had nothing to do with race at all. Gonell and Bump are assuming bad faith in their targets, where there are reasonable alternative explanations. The crowd may have been hurling racist abuse at Gonell, but the words he quotes and cites aren’t necessarily evidence of that, and are more likely statements about the charged political situation rather than racists taking the time to throw out racial abuse in the moment.

When there are potential reasonable alternative interpretations of a word or phrase, a reporter should be reluctant to determine motive from the mere words alone.

There is no serious evidence that participants were “white nationalists” and that smear is just left-wing fantasy. But the words that were actually heard by these witnesses are more serious and significant.

And Dunn is completely lacking in credibility and Gonell, even if he is relaying the words accurately, could be interpreting them incorrectly.

The solution would be to release all of the surveillance footage from that day to better determine whether this racial abuse actually happened, but for some strange reason Speaker Pelosi refuses to allow that disclosure. [14][15]

Phil Bump isn’t out to educate readers, he’s out to smear and blast out partisan hitjobs with the least amount of work. His writing and analysis represent major negligence in journalism.