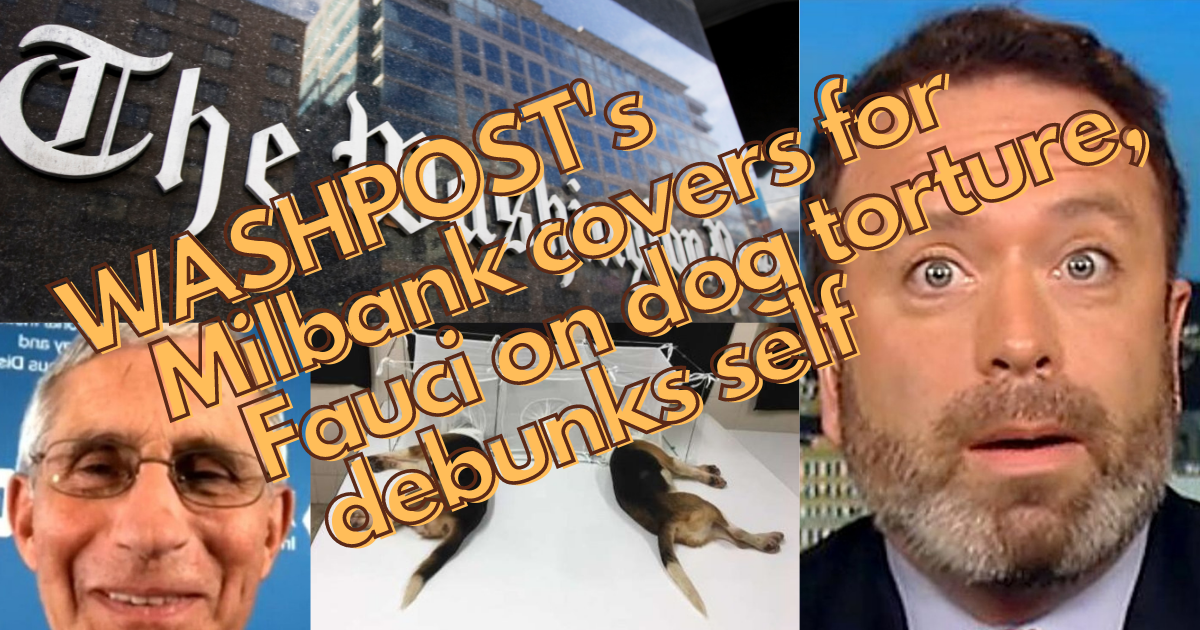 When fact-checking, the bulk of the time is spent in research and documenting claims. The writing component is one of the easiest parts of the job.

Therefore, it’s wonderful charity when leftist reporters like Dana Milbank debunk their own articles within the article itself.

It’s notable that the Post editors put this under “Opinion” and not as a fact-check or under news.

It’s not our normal practice to fact-check op-eds, but here Milbank is normally a reporter, and he’s making very specific claims and trying to debunk the journalism of a variety of different outlets.

Milbank notably doesn’t give Fauci an all-clear in the article. He’s careful to parse his words.

But he is clear that all the reporting is junk and shouldn’t be trusted. Here’s how he arrogantly makes that statement:

“The episode says more about the right-wing disinformation machine and its crusade against Fauci than it does about research funded by Fauci’s National Institute of Allergy and Infectious Diseases.”

Just to name a few off the top of my head.

If there was a ‘right-wing disinformation machine’ then why do only 11% of Republicans trust the media? [2] It would seem very counterproductive to push disinformation when none of your own people believe it. This is just another empty talking point that helps left-wing reporters console themselves about the obvious and ever-present left-wing media bias.

The list of major media mistakes, a recent one compiled by journalist Sharyl Attkisson, [3] is notably in that the mistakes always favor the political left and always disadvantage the political right. Curious how that happens.

Anyway, let’s make a quick list of all the outlets and reporting Milbank’s trying to dismiss:

It’s usually a sign that something’s wrong when someone is trying to debunk 8 articles at once, since each is going to have slightly different claims and facts within.

Here’s the actual language used by Milbank to debunk 8 articles:

“It turns out that this Tunisian study was erroneously attributed to NIAID. NIAID did, however, fund different research in Tunisia — and the beagles weren’t puppies, they weren’t euthanized, they weren’t “de-barked,” and they weren’t “trapped” so “flies could eat them alive.” The dogs were given an experimental vaccine and allowed to roam.”

So, he’s making these 7 claims:

You can see that Milbank is splitting quite a few hairs. He’s arguing about the source of the funding, and whether the dogs were puppies or not. But the question of whether the underlying research happened is the main question. The minor details, and quibbling over them, is cherry-picking minor problems in the story in order to try and debunk the whole story.

This is a common mainstream media trick: hyper-focus on one minor error in a story in order to ‘debunk’ the rest of the story. It’s dishonest.

One threshold question would be whether the reporting actually made those claims.

Let’s take Cassandra Fairbanks’ article at the Gateway Pundit and assess it against Milbank’s claims. [12] I’m not doing all 8 of the ones he cited because, well, because Dana Milbank isn’t worth it. And because we’ll be able to see his chronic dishonesty in examining this one article.

1) Fairbanks DOES NOT claim NIH funded the study. In fact she is crystal clear and spot-on with the facts when she says: “The article’s “Funding Statement” confirmed that it was given money by the National Institute of Allergy and Infectious Diseases and that NIH funding was given to the lab in Tunisia.”

3) Fairbanks DOES claim that the dogs were euthanized. “The researchers are developing infections in 28 beagles and allowing them to suffer for three months before being euthanized.”

4) Fairbanks DOES NOT claim the dogs were ‘de-barked’ – in fact she quotes another group as saying “the dogs were “vocalizing in pain” during the experiments.”

5) Fairbanks DOES NOT claim the dogs were ‘trapped’ – she does mention they were occasionally locked in cages.

6) Fairbanks DOES claim that some of the dogs were tortured by having sand flies eat them while alive. She says in her article, “One of the tortures that the beagles were subjected to included locking their heads in mesh cages filled with infected sand flies so that the parasite-carrying insects could eat them alive.”

7) Fairbanks DOES NOT claim that the dogs were locked up and not allowed to roam at any point.

So, of the seven Milbank debunks, when applied to Cassandra Fairbanks’ article at the Gateway Pundit, Milbank completely mischaracterizes and misstates Fairbanks on 5 out of 7 of his claims.

But here’s where things get interesting. Milbank admits his whole debunking is hereby debunked:

Had right-wing outlets checked with the NIH, they would know that in another study, which didn’t involve Tunisia and didn’t involve flies, NIAID-funded researchers did indeed perform cordectomies on 44 beagle puppies and euthanized them after the study.

This doofus just debunked himself.

Since “cordectomy” isn’t in common usage, let’s give a little context to what it is: taking out the vocal cords. [13]

“It turns out that this Tunisian study was erroneously attributed to NIAID. NIAID did, however, fund different research in Tunisia — and the beagles weren’t puppies, they weren’t euthanized, they weren’t “de-barked,” and they weren’t “trapped” so “flies could eat them alive.” The dogs were given an experimental vaccine and allowed to roam.”

So now his objection is that the NIAID study, which used beagle puppies, cut out their vocal cords, and euthanized them… didn’t use flies? That’s his big debunk of the article?

He spends the rest of the article justifying the torture of dogs for this end, because according to him it might end AIDS. He also manages to complain that people keep FOIA’ing Fauci to find out the truth about how national policy is made. [14][15]

So if they were euthanized, then Milbank is wrong, by his own admissions, on 6 out of 7 things in Fairbanks’ Gateway Pundit article. What about the last remaining claim, that the dogs were locked up and allowed to be ‘eaten alive’?

Milbank isn’t clear at all on this point, so we had to do a little digging.

According to the NIH’s own website, the US did fund experiments on beagles with sandflies repeatedly attacking the dogs until they developed lesions back in 2016, in Maryland. [16]

The only way to get beagles to be eaten by sandflies is, logically, if they are alive. The sandfly is therefore eating a small piece of the beagle while it is alive. To say they are being ‘eaten alive’ is factually correct, though it could lend itself to a more hyperbolic interpretation where ‘eaten alive’ is synonymous with ‘bitten.’

This is almost a small issue of semantics, but that seems to be the only arguable point that Milbank could have left to ‘debunk’ Fairbanks’ article at the Gateway Pundit.

In another article from the DailyMail the NIH admits that they funded this study, however, there was no link to the study or evidence of the funding. [17]

Quoting from the article abstract:

So… yea Milbank is literally full of crap. He’s overflowing with crap. Dana Milbank is a chronic liar at this point on almost every point he made in this article.

But wait! Dear reader! We’re not done yet!

You see, Milbank spent most of his article’s last third rationalizing why horrible experiments like this were necessary. Let’s recap how he made these rationalizations:

No doubt people can find some clunkers in the thousands of studies NIAID funds each year — it has 10,000 active projects — but what’s happening now is an endless game of gotcha by Fauci’s right-wing critics, who are bitter about his aggressive fight against covid-19 and his criticism of the Trump administration’s woeful handling of the pandemic.

Torturing beagles is a ‘clunker’ – whatever that means. He’s trying to say all the detractors are cherry-picking, but that’s yet another tacit admission that Fauci is, indeed, torturing dogs, it’s just that he’s doing a bunch of other experiments that are beneficial.

He’s also saying a form of “this is all political” and none of the people complaining are doing so in good faith. This is a roundabout way of saying everyone complaining is a partisan because this might have a political effect. It’s a nonsense argument, but it passes for journalism at the Washington Post.

“Millions of people are alive today…”

You would think that if Milbank was half as good of a journalist as he thought, he could prove or cite that statement more than just making it blithely. If millions of people are alive because of torturing dogs, or from experiments like that, he could at least cite one reflective example.

None of these major wild assumptions are sourced, they’re just taken for granted. This is Milbank’s opinion as fact. Are millions of people being saved by this experiment?

It might be helpful to read the actual experiments. [20]

Here’s what one of them said, quoted in part, and demonstrating enormous missing context in Milbank’s statements:

“…In the past, leishmanization, a process in which deliberate infection with a low dose of Leishmania major, etiologic agent of zoonotic cutaneous leishmaniasis (ZCL) causes a controlled skin lesion and provides > 90% protection against reinfection, was a common practice. Although such practice may not be acceptable under the current regulatory environment due to possibility of complications, these observations suggest that live- attenuated parasites that provide a complete array of antigens without causing disease could be an effective vaccine for leishmaniasis.”

Society had a viable treatment that solved over 90% of infections for this infection, but for some regulatory reason government gave it up.

This isn’t a health crisis causing these dogs to be tortured to death. We have a government policy that is standing in the way of a previously common solution that provided a cheap, effective, simple solution: a small infection that provided natural immunity.

This isn’t saving millions of lives. It’s creating a workaround to public policy which is in the process of hurting thousands of people who could otherwise get cheap natural immunity. That sounds familiar, but I can’t quite place it…

And while I feel bad for Fauci’s beagle brigade that had to be eaten alive by sandflies, at least in their final moments the beagles can comfort themselves knowing: at least I don’t have to read Dana Milbank.