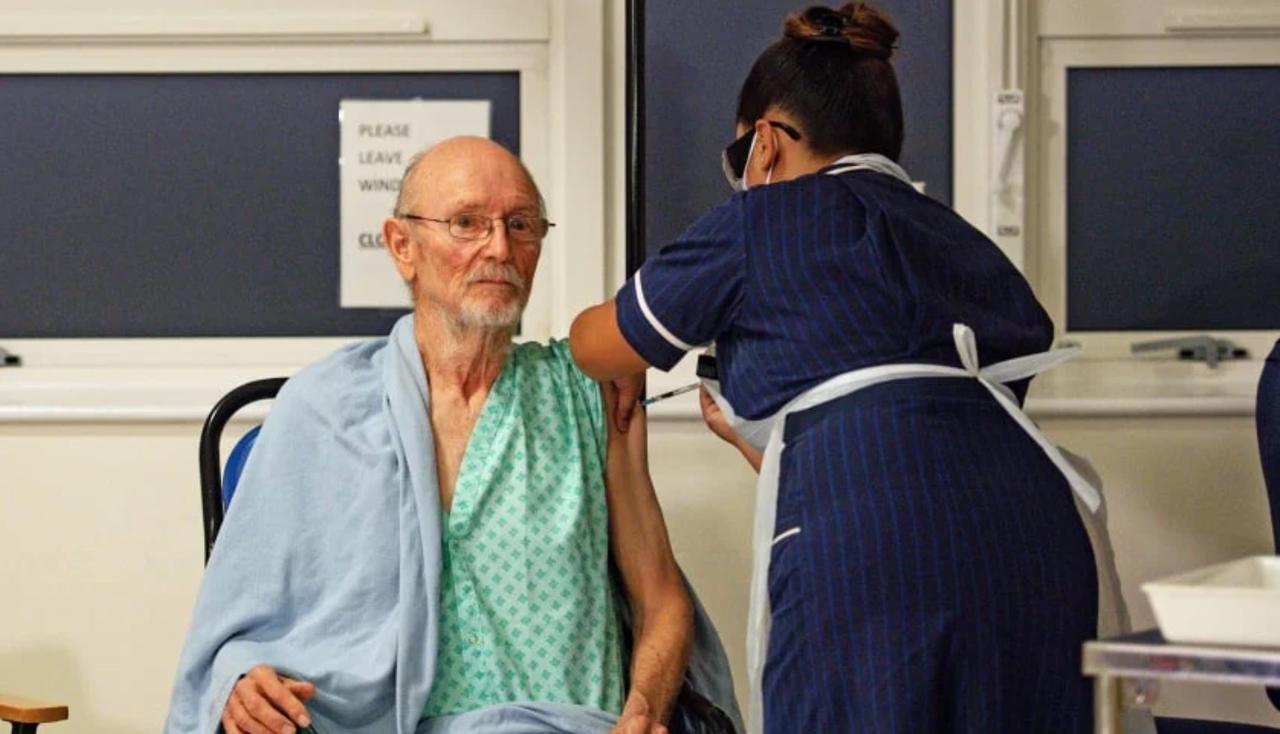 Update (0915ET): The second individual vaccinated in the UK on Tuesday was an 81-year-old man named “William Shakespeare”.

Meanwhile, patient No. 1, told the press that the vaccine is the best earlier Christmas present she could have asked for because it means she can now spend the holiday with her family without fear.

This is the moment that 90-year-old grandmother Margaret Keenan returned to the ward at her local hospital in Coventry, after she became the first person in the world to receive the clinically-approved #COVIDVaccine this morning 👏🏾👏🏼👏🏽 pic.twitter.com/80yRjJLRhM

At 6.31am, Margaret made history by becoming the first patient to receive the vaccine – all less than a year after the first case of the virus was diagnosed!

Oh yeah right, I. P. Freely and Amanda Hugnkiss up next. This guy is taking the piss for sure. https://t.co/ziCJaz5e8m

As far as Mr. Shakespeare is concerned, we wonder if he prefers Bill, or William?

The big day has finally arrived.

Less than a week after becoming the first western country to approve a COVID-19 vaccine for emergency use, the UK has confirmed the vaccination of the first patient to receive the vaccine outside of a clinical trial setting in the west. Kicking off a day that HMG has branded “V Day”, a historical allusion to the allied triumph in World War II. To try and combat burgeoning doubts about the safety and efficacy of the first round of COVID vaccines (which rely on a relatively new mRNA technology), authorities selected a 90-year-old woman, who became the first patient to receive the vaccine.

The patient’s name is Margaret Keenan, and she’s a 90-year-old grandmother.

“If I can do it, so can you”: this 90-year-old UK grandmother has become the first person in the world to receive the Pfizer-BioNTech vaccine outside of trials https://t.co/E11VI2TNXE pic.twitter.com/3hzNL2gzzh

As the Associated Press declared in its report on the vaccination, Tuesday is “a momentous day in the global fight against the coronavirus pandemic that has killed more than 1.5MM people and infected over 67 million more in 2020, the worst health crisis the world has faced in a century.”

British officials have already distributed nearly a million doses of the Pfizer vaccine across the UK, and injections are beginning in all four of the UK’s constituent nations.

The first shot was administered at one of the hospital hubs around the country on what UK officials dubbed “V-Day,” Danica Kirka reports from London.

British officials have said elderly nursing home residents will receive first priority for vaccines (after nursing home outbreaks have been blamed for the UK’s death toll, which is larger than its European rivals.

Meanwhile, in the US, the FDA published a report Tuesday morning from the panel convened yesterday to start examining the data from the Pfizer-BioNTech vaccine trials. They happily declared that there’s “no reason” to delay emergency-approval of the vaccine. The agency is expected to release two reports analyzing the Pfizer-BioNTech vaccine ahead of Thursday’s meeting, with data expected to break down the vaccine’s efficacy with various age, ethnic and other demographic groups. One report is prepared by the agency’s own scientists and the other will be from scientists with Pfizer and its German partner.

On Thursday, the FDA’s vaccine advisory panel will discuss these materials in advance of a vote on whether to recommend authorization.

Finally, a report from WaPo published last night claimed that Pfizer and Moderna won’t be able to supply the US with additional doses until the late spring/summer. While the implication was that this was some kind of retribution from the Trump Administration, former FDA Dr. Scott Gottlieb explained on CNBC Tuesday morning that this was likely not the case.

“How good are the vaccines at preventing infection and preventing transmission? We know they prevent #COVID19 disease … but how good are they at actually preventing people from getting infected in the first place? @ScottGottliebMD on what questions we still need to answer. pic.twitter.com/MP0rK8Qo0Q

Circling back to the state of the US outbreak, hospitalizations nationwide climbed to a fresh record high…

…Even as some of the most worrisome midwestern and mountain west states – including WI, IL, ND & SD – have seen cases and hospitalizations slow recently.

Amazingly, tiny Connecticut, a state that was widely praised for it initial response to the virus, is now seeing the highest case count per capita as testing ramps up.

Across the US, states are continuing to tighten restrictions as more than 30MM people are now under lockdown in and around LA as new ‘stay at home orders’ are handed down in the Golden State.

Here’s some more COVID news from overnight and Tuesday morning:

India’s federal health secretary Rajesh Bhushan says the government’s regulator could grant a license to some developers of COVID-19 vaccines in the next few weeks. Six vaccines, including Astra Zeneca’s Covidshield and Bharat Biotech’s Covaxin, are in trial stages, Bhushan says (Source: Nikkei).

Indonesia’s state-owned pharmaceutical company Bio Farma says that interim data on trials it was conducting on vaccines produced by the Chinese company Sinovac showed up to 97% efficacy (Source: Nikkei).

Tokyo reports 352 new infections, up from 299 a day earlier, with the number of patients in serious condition in the capital increasing by five to 60 (Source: Nikkei).

Hong Kong will ban dining in restaurants after 6 p.m. to curb a rise in coronavirus cases in the densely packed financial hub (Source: Nikkei).

Brazil’s government says it is in advanced talks with Pfizer to buy 70 million doses of COVID-19 vaccine, and a memorandum of intent should be signed this week (Source: Brazil).

* * *
Britain of course isn’t the first country to start vaccinating under emergency order: China has already vaccinated well over 1 million people, and Russia on Saturday started vaccinating health-care workers and other ‘vulnerable’ individuals in Moscow, the epicenter of what has become one of the largest outbreaks in the world.