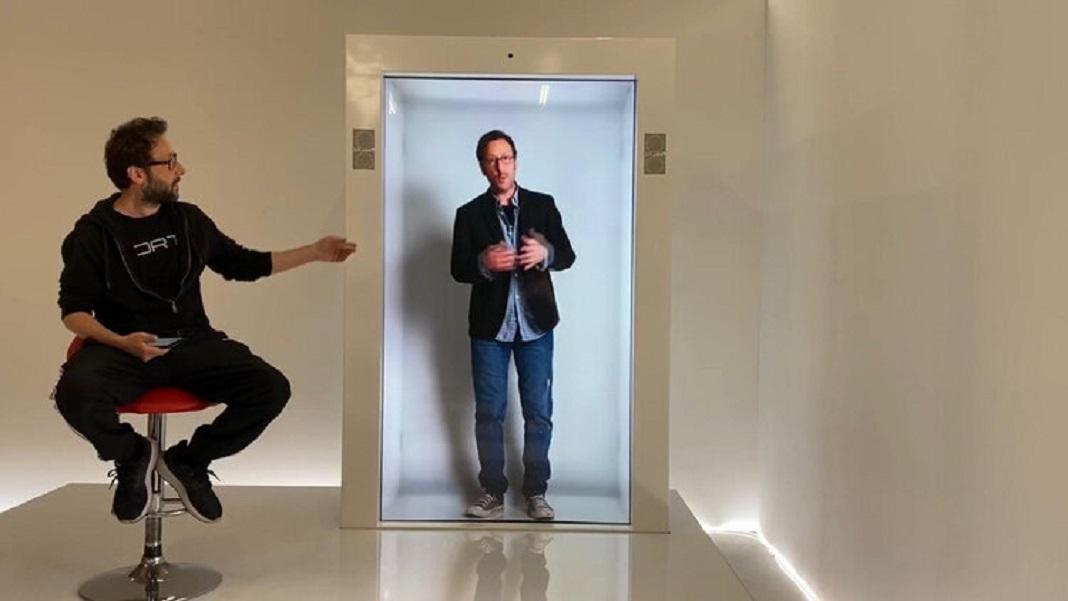 Over the last several months we’ve gotten very used to communicating via video chat. Zoom, FaceTime, Google Hangouts, and the like have not only replaced most in-person business meetings, they’ve acted as a stand-in for gatherings between friends and reunions between relatives. Just a few short years ago, many of us would have found it strange to think we’d be spending so much time talking to people “face-to-face” while sitting right in our own homes.

Now there’s a new technology looming on the horizon that may one day replace video calls with an even stranger-to-contemplate, more futuristic tool: real-time, full-body holograms.

Picture this: you’re sitting in your living room having a cup of coffee when the phone-booth-size box in the corner dings, alerting you that you have an incoming call. You accept it, and within seconds your best friend (or your partner, your grandmother, your boss) appears in the box – in the form of millions of points of light engineered to look and sound exactly like the real person. And the real person is on the other end of the line, talking to you in real time as their holographic likeness moves around the box – you can see their gestures, body language, and facial expression just as if they were really there with you.

The closest approximation to this that you may have heard about was when a holographic version of the late Tupac Shakur performed at Coachella in 2012. The hologram was simultaneously highly detailed—the lines of Tupac’s washboard abs were clearly defined and visible—and somewhat blurry; after the opening “scene,” in which the hologram stood still, it was hard to see any of Tupac’s facial features.

The box is called an Epic HoloPortl, and it’s made by PORTL, a company whose founder was inspired by Tupac’s hologram; after seeing the 2012 performance, David Nussbaum quickly bought the patents for the technology that made it possible, and has been working on turning the tech into something useful, fun, and scalable ever since.

The Epic has high-resolution transparent LCD screens embedded into its interior walls. The person on the other end—the one appearing as a hologram, that is—just needs to have a camera and be standing against a white background. A camera on the Epic shows the sender the room and people he or she is being beamed to, essentially just like a Zoom call.

Last month PORTL raised $3 million in funding, led by Silicon Valley venture capitalist Tim Draper. Nussbaum says he’s sold a hundred Epics, has pre-orders “in excess of a thousand,” and dozens of the devices have already been delivered, with clients including malls, airports, and movie theaters (all places that aren’t very frequented today—but here’s hoping they’ll make a comeback when the pandemic subsides).

In fact, PORTL may not have gotten this funding if it weren’t for the pandemic; Nussbaum told TechCrunch that Draper pushed him to expand his vision for the company and its technology when the virus hit, likely anticipating that people will want new ways to communicate from a distance.

Few can afford to shell out $60k for a hologram booth, though (not to mention having space for a 7-foot-tall by 5-foot-wide by 2-foot-deep box), and Nussbaum knows it; his next project is to build a smaller, cheaper version of the Epic.

Even at a tenth of the current cost, the tech likely wouldn’t see widespread adoption by people wanting their own personal hologram portal at home. But there are many possible use cases beyond person-to-person communication.

Any venue or event that would typically hire famous people to appear in person—be they celebrities, academics, religious figures, or business leaders—could beam a hologram of those people in instead. The implications may be most significant for education and business; Nussbaum believes the CEOs of the not-too-distant future will conduct their meetings via hologram. “You can now make that very important personal emotional contact with people that you need to talk to without actually having to leave your office,” he said.

Whether this is true remains to be seen. Many of us have experienced Zoom fatigue over the course of the pandemic, becoming acutely aware that while it’s better than nothing, it’s also nothing like being in a room with someone in person; there’s only so much you can get from a face and voice on a screen.

Will a face and voice on a three-dimensional, life-sized hologram be better? Stay tuned to find out.