Authored by Sven Henrich via NorthmanTrader.com, 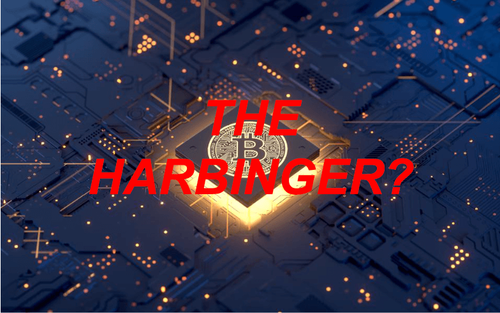 In a world that is uniformly bullish-oriented in the firm belief ( and so far correct belief) that coming inflation, ongoing central bank central bank intervention and further stimulus programs will keep the record asset price inflation machine going I want to offer a little thought experiment: What if everything is the same bubble and if so is there a harbinger of trouble on the horizon?

This rally in structure is not unusual, indeed it is following virtually the same script/structure following the Trump election in 2016 with an important caveat however:

The only difference now is that markets are pricier than ever and charts are the most vertically extended than ever in many cases.
i.e. small caps $IWM pic.twitter.com/lZHjACboqb

Another caveat: Market valuations have again reached never before seen levels of asset price disconnect from the underlying size of the economy: 192.9% 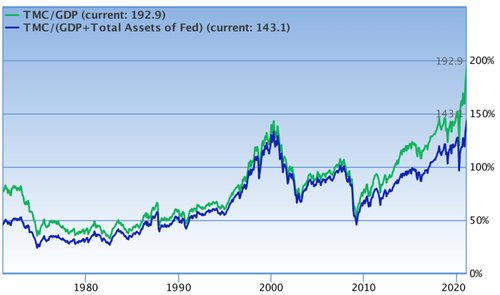 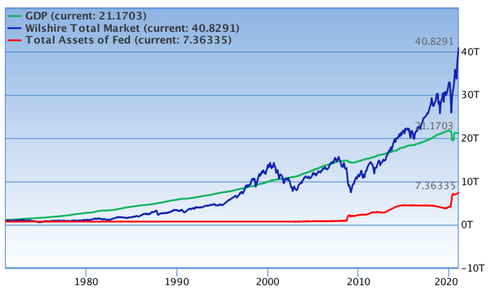 All of this is ignored by participants and seemingly justified by low rates and ongoing interventions, the risk free rate they call it.

Yet despite all the new highs headlines yesterday there are some subtle cracks emerging. Both small caps and $DJIA are struggling to make new highs versus the recent highs:

It may mean nothing, but maybe it means everything, only time will tell, but perhaps the new highs headlines are not what they are cracked up to be.

What is clear that yesterday’s highs were prompted by another big rally in big cap tech inspired again by one fo the big $FAANG components: $NFLX. The stock benefitting from everybody sitting at home due to the pandemic and watching TV. Fair enough, but it may be noted that markets have supposedly rallied on vaccine optimism and the re-opening trade. Who’s watching TV in the same amounts when the economy againreopens? Shouldn’t that ultimately impact $NFLX negatively? I know, don’t ask questions, just buy.

Which brings me to the original question: What everything is the same bubble? What do $TSLA and Bitcoin have in common? Nothing really other than vertical price appreciation: 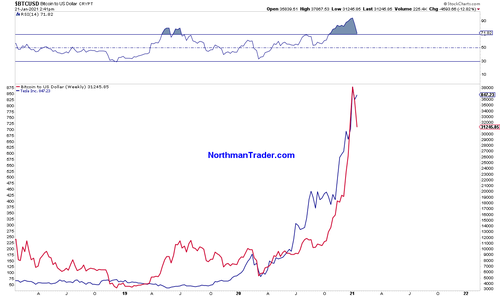 That is until very recently as Bitcoin is suddenly under pressure. What if this sudden price reversal is a harbinger for equities?

In a world of everything vertical price appreciation Bitcoin has not disappointed doubling in price from the original peak in 2017.

A few days ago $BTC hit a technical pivot point:

$BTC appears to show an initial technical reaction at the 3.618 fib.

We can note that this pivot has indeed produced a price reaction following a near vertical price move: 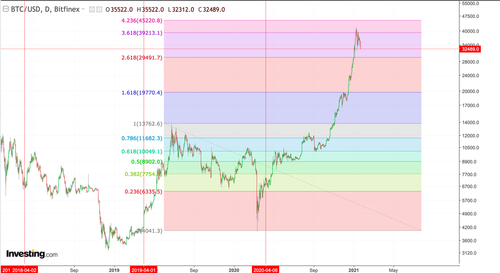 A vertical price appreciation not unlike what we saw leading up to the 2017 peak: 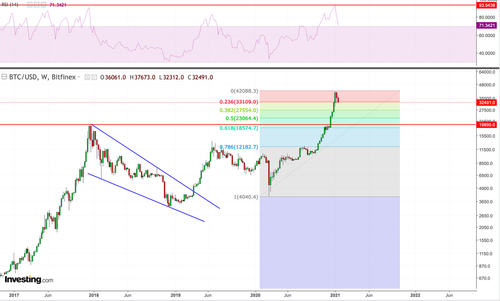 Recall that equities then too were in their own vertical move foaming at the mouth about coming tax cuts. Bitcoin peaked in December 2017. Equities peaked one month later at the end of January. The reversal was brutal:

The last time we’ve seen this much uniform optimism and one way asset price appreciation was into January 2018.
Back then 16 weeks of price gains got taken out in 2 weeks.
Not suggesting an exact repeat, but just highlighting that risk happens fast. pic.twitter.com/BqNx5UBYlc

What if Bitcoin itself is a bubble? I know a sacrilege question, but consider that its original purpose, that of a currency, has increasingly taken a lesser role in the marketing of bitcoin as a key asset to invest in, rather the devaluation of the dollar and expectation of continued money printing is ever more cited as the primary reason to invest in bitcoin. Same with equities.

If the narratives for buying are the same, then why not a correlation in price? If everything is linked with and justified by the actions of central bankers then I submit it’s all part of the same trade: Unfalsifiable belief in central bankers to continue to disconnect asset prices from the underlying size of the economy.

This here may turn out the same, and if so, Bitcoin may have been the harbinger to come.

Only time will tell. But as long as the .236 fib holds on the $BTC chart then this reversal may just prove to be another short term pullback, but if doesn’t $BTC may find itself confronted with a much larger corrective risk path ahead, including perhaps a retest of the previous highs of 2017. The implications for equities? Stay tuned.