The Anti Slavery Mural is Back, Hopefully Forever. 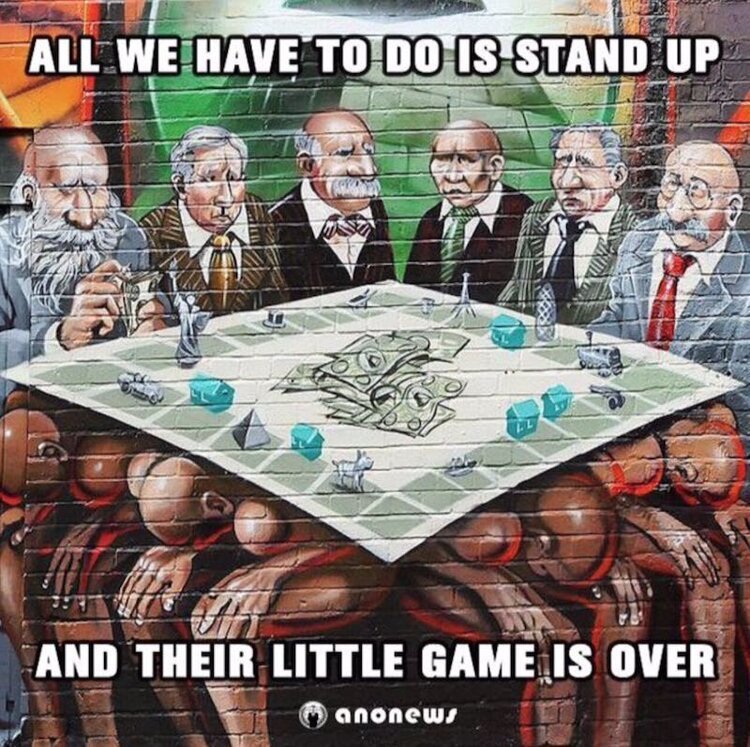 Hip Hop legend Ice Cube came under fire last week for posting an anti- racist image on Twitter in support of Black Lives Matter.  The image was widely panned as ‘anti-Semitic’ by those who work hard to conceal images of slavery, oppression and abuse as soon as they gather that a member of their ethnic group may be complicit in such immoralities.

Following the killing of George Floyd, Ice Cube uploaded an image of a group of bankers sitting around a game board that rests on the bowed, naked backs of black slaves.  “All we have to do is stand up and their little game is over” is the accompanying text.

This anti slavery image isn’t new. It first appeared as a mural by artist Mear One in London’s East End back in 2012 when it sparked a controversy.  Some local Jews were offended and, of course, the  local Labour council of the London borough of Tower Hamlets was quick to react. It called in the police and reportedly gave the owner of the property 28 days to remove it.

Jeremy Corbyn, supposedly an ‘anti racist’  initially voiced support for the mural and the artist behind it. Later, following pressure from Jewish groups, Corbyn reversed himself and apologized. The Guardian,  once a respected Left leaning paper was also quick to cry foul  and located the anti racist mural within the Elders of Zion-Nazi propaganda spectrum. Even the ultra Left Morning Star turned against the pro black/anti capitalist  art “Bad Art and Bad Politics” is how our most dedicated ‘socialist’ paper referred to Mear One’s mural.

At the time Artist Mear One stated, loud and clear, that his “mural is about class and privilege…The banker group is made up of Jewish and white Anglos. For some reason they are saying I am anti-Semitic. This I am most definitely not… What I am against is class.”

It was also ­­­­revealed at the time that out of the six bankers figures depicted in the  mural (Lord Rothschild, John D. Rockefeller, J. P. Morgan, Aleister Crowley, Andrew Carnegie and Paul Warburg) – only two (Rothschild and Warburg) were Jewish. But none of that helped, our socialists, progressives and ‘Left’ icons left the black slaves to rot under the monopoly game board and stood firmly against Mear One’s art just because two of the bankers he depicted were Jewish.

What I want to understand today is how it is possible that the Labour council of Tower Hamlets, the ‘anti racist’ Jeremy Corbyn, the presumably multicultural ‘progressive’ Guardian, the ultra left Morning Star, or shall we say the entire Left/progressive  spectrum all fell into the same trap, they turned their backs on Blacks and  slavery and committed to the defence of the most horrendous abusive bankers known to man just because two of them were  gifted (artistically)  with a well endowed nose.  One may wonder whether White Privilege is a valid notion as it becomes clear that Hooked Nose is by far the ultimate privilege. It literally allows for  total impunity. You even get away with slavery, at least in the ‘Left’ realm.

Time to admit it publicly – in the face of Jewish sensitivities, the Left seems to collapse. Its solidarity with oppressed minorities evaporates. Indeed, if there is one thing the Left is really good at, it is betraying its core supporters. The Left has repeatedly betrayed the working class. Instead it adopted Identitarian politics that were set to break the working class into biologically oriented fragments (defined by skin colour, gender, sexual orientation, etc.). The Left even betrayed its own ideology dismantling its own philosophy of class politics that initially united us regardless of our gender, race or ethnicity. Embracing biologically oriented identification is, in practice, an adoption of Hitlerian ideology. Corbyn had been anti- banker, but he has often been very forgiving towards Jewish financiers  such as the Rothschilds and George Soros. “Really important video which spells out the vile and destructive nature of antisemitic conspiracy theories,” is how Corbyn, as a  Labour leader, described a horrendous  video that presented the Rothschilds and George Soros as mere victims. Rothschild according to the video wasn’t even that  rich.

For the Left, I am sorry to say it, the Blacks are a solidarity pets. So are the Palestinians and other oppressed groups and minorities. I am afraid that this  shameful divisive parade is not going to stop anytime soon. But Black community leaders have started to wake up.

Yesterday, members of African American Council were BOOED as they told protesters in Seattle’s ‘autonomous zone’ that they had  ‘hijacked’ the Black Lives Matter movement by pushing other causes.

And there is  some  good news in this mural saga: 1. By now we know that art, like books, can be physically burned, it can be erased from walls, removed from exhibition: but beauty like the truth unveils itself against all odds. Mear One’s mural is with us forever and so is the memory of Corbyn/Guardian/Morning Star betrayal of the Blacks and their history.

2. Despite horrendous harassment from Jewish pressure bodies, the American Hip Hop star stood firm. Unlike Corbyn, Ice Cube answered his critics tweeting “what If I was just pro-Black?… I’ve been telling my truth.” I have always wondered why Corbyn didn’t answer his critics: ‘what if I were pro Palestinian rather than anti Jewish?’ The brainless veteran Labour leader couldn’t even figure this out.

Our world would look far better if our politicians in general and Left ones in particular had been just slightly more committed to truth. It would help if they had as much guts in their entire bodies as artists like Ice Cube have between their toes.