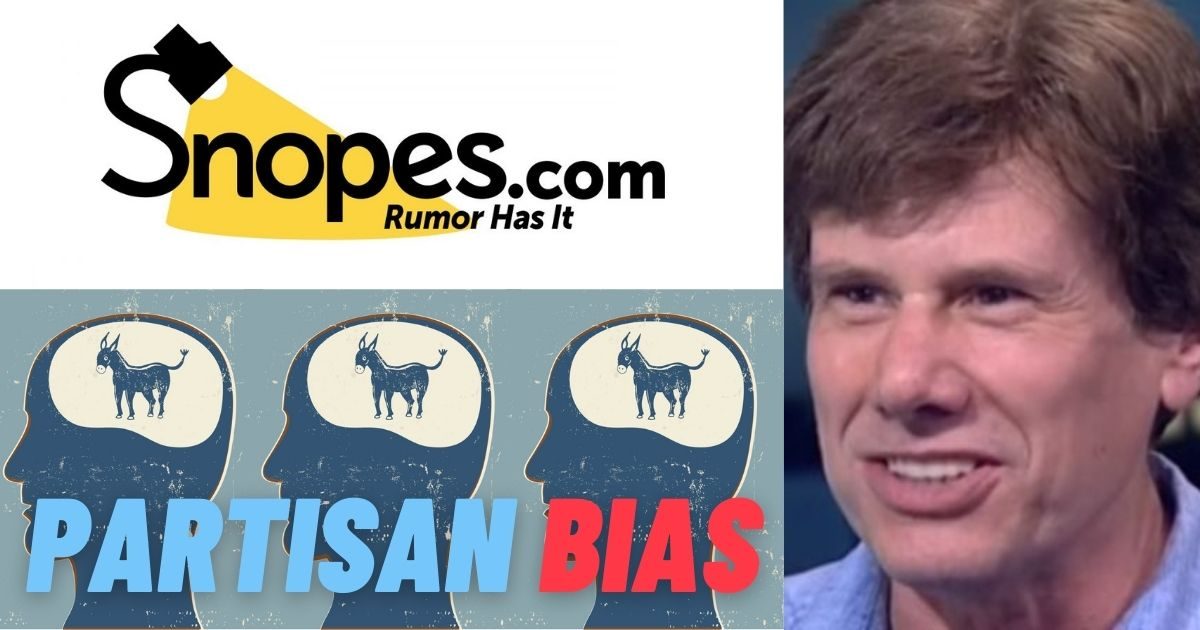 It’s hard to think of an outlet or fact-checking organization more disreputable than Snopes.

And I’m not talking about all the embezzlement, hookers and strippers and nasty divorces, no I don’t mean any of that. [1] I mean just their standard fare of hyper-scrutiny to anyone on the right, and then shameless sophistry in order to defend those on the political left. David Mikkelson and first wife Barbara. Not pictured: the $98,000 David spent on whores during 4 years of this marriage.

Here’s how Snopes made their assessment:

Joe Biden lied in claiming that the accident that killed his wife and daughter involved a driver who had been drinking.

Biden has at least twice publicly stated or suggested that the driver of the truck that struck his wife’s vehicle, killing her and the couple’s daughter, had been drinking, even though the driver was not charged with drunken driving (or any other infraction suggesting fault on his part).

No definitive evidence exists to prove or rule out whether the other driver had been drinking, and belief that drinking had contributed to the crash was reportedly prevalent among the local community and not something Biden simply made up on his own.

Let’s read between the lines here: there’s no evidence that the driver, Curtis Dunn, was drunk. The attending medic did not notice the smell of alcohol. No test survives that validates that claim. There is literally not a single shred of evidence to support the Joe Biden claim that a drunk driver killed his first wife.

If you look at the way he describes the story, he’s eliciting sympathy by telling the story. The story is much better when his wife is faultless and killed by a drunk:

“Let me tell you a little story,” Mr. Biden told the crowd at the University of Iowa. “I got elected when I was 29, and I got elected November the 7th. And on Dec. 18 of that year, my wife and three kids were Christmas shopping for a Christmas tree. A tractor-trailer, a guy who allegedly — and I never pursued it — drank his lunch instead of eating his lunch, broadsided my family and killed my wife instantly, and killed my daughter instantly, and hospitalized my two sons, with what were thought to be at the time permanent, fundamental injuries.”

Politicians often embellish their personal stories in order to elicit sympathy. It’s a mechanism for them to get people to like them quickly. In John Kerry’s biography, he tells a story about his running mate, John Edwards, similarly using the story of his son’s death as a way to engender a quick personal connection. [2]

Biden is a known embellisher and liar. His 1988 campaign for President was doomed by his plagiarism. [3] His past tales are often very obviously false and made up, such as his oddball one about fighting someone at a swimming pool named “Corn Pop.” [4] The intersection where Neilia Biden died is at the corner of Limestone and Valley Road in Hockessin, Delaware. [5] At the time there was a steep hill in both directions with no stop signs. Neilia was at the stop sign and advanced, coming into oncoming traffic. Neilia was holding the Biden baby in her arms when the crash occurred.

The story is horrible, but the context that the crash was clearly Neilia’s fault was something that didn’t fit the nice and neat political narrative for Biden. Additionally, the fact that Joe had been regularly seeing his future wife Jill Biden, who babysat the Biden children, is also one of those inconvenient facts that gets in the way of the saccharine narrative.

Snopes previously tried to confuse readers about the truth about Joe Biden’s likely inappropriate relationship with Jill when they were dating, when one or both of them were still married. [6]

But here, the ‘fact checking’ organization Snopes has checked the facts, found them not to be to their ideological liking, and are engaged in fact-ignoring. The facts have been checked, and found wanting. There’s no way to support the Biden claim that Curtis Dunn was drunk when he crashed into Neilia Biden, killing her and the Biden daughter, and critically injuring Beau and Hunter in the back seat.

No one disputes the personal tragedy to Joe, but it is very revealing to his character how he decided to use that story and embellish it for effect. It fits his character and prior patterns that he embellished the story and used it for maximum political effect, similar to other left-wing Senators who have lived through personal trauma.

That Biden used a major soapbox to defame and malign an innocent man, Curtis Dunn, is all but ignored in all of this. Dunn likely lived with a great deal of undeserved guilt augmented by Biden’s false and reckless claims. It is also worth noting that the records, and possible toxicology report from a Neilia Biden autopsy are missing. The conspiracy theory says that perhaps Neilia was drunk having been confronted with Joe’s infidelity with Jill, and the reason she was running errands with all her children and not leaving them with a babysitter was because Jill would have been the babysitter. As with many such theories, the distance in time renders it difficult to solve these kinds of claims. The accident photo makes clear, though, that Neilia definitely pulled into traffic and was broadsided with a great deal of force. When Snopes writes that this claim is “mixed” they are lying. They are also applying double standards, especially as it comes to their assessment of center-right figures. They engaged in a very superficial investigation where they end up relying on alleged gossip from 50 years ago in order to rate a claim ‘disputed.’ They ignore the primary sources they dislike, and then misrepresent other sources to say the opposite of what they actually say: that Curtis Dunn was completely sober and that Neilia Biden made a traffic mistake that was fatal to herself and her daughter.

There is no way to review these facts and come to the “Mixed” conclusion that Snopes has arrived at, it’s a political decision and not one justified by the facts. Biden’s claim is 100% wrong, and giving him the excuse of relying on local gossip is laughable coming from a supposed ‘fact check’ organization.

Snopes is a trash outfit and their rating here was trash journalism.