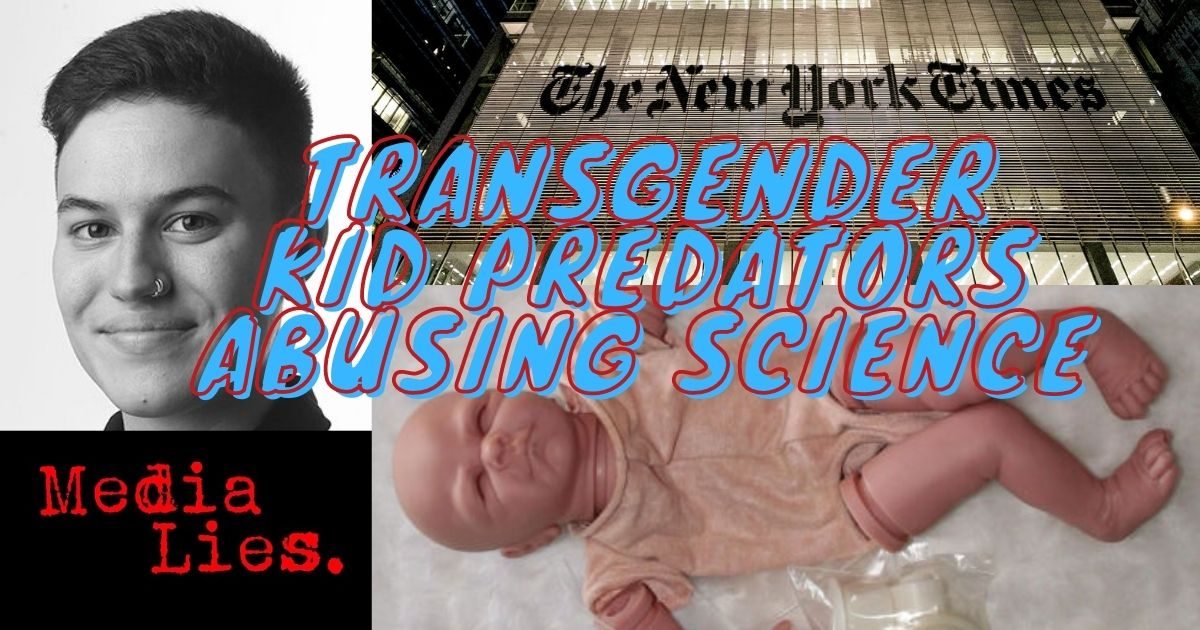 Lena Wilson is a project manager for the newsroom at the New York Times. Here’s her latest piece of left-wing propaganda.

In what is supposed to be a realistic and objective article about puberty blockers, NYT has opted for publishing complete and total propaganda. The author, Lena Wilson, publishes an unbalanced, superficial and pernicious account of puberty blockers. The factual truth is that the use of puberty blockers is an experimental procedure that has faced severe criticism from the health community because so little is known on the long term side effects.

The first issue in the article is that Wilson writes her opinion as fact: that transgender youth are legitimately transgender and thus need a variety of health care options to account for their needs. This can be seen by numerous references to “transgender youth” and “transgender kids” who are born identifying with a gender different from the one they were born with. There is no mention that “transgender kids” often grow out of the dysphoria they feel. According to ex-transgender Walt Heyer: [1]

“Gender dysphoria in children sees very low rates of persistence—ranging from 2.2% to 30% in males and from 12% to 50% in females, according to the DSM-5.”

So, to label a child “transgender” is a political term, not a factual one. In fact, Heyer quotes a doctor saying that children, if affirmed too quickly, are susceptible to suggestive influence contrary to reality [1]:

“As Eric Vilain, a geneticist and leader of the Center for Genetic Medicine Research at Children’s National Health System, points out, social transitioning is liable to influence children’s thinking. “If the children are pushed in this belief it will be much harder for them to get out of this belief because everyone will have agreed on it very, very early on,” Dr. Vilain says. It’s one thing to grow up confused about one’s gender; it’s another thing to grow up being told that one belongs to a special group of “trans kids.”

Wilson is not a reporter. She is an activist pushing a narrative on children and on the average NYT reader.

Wilson also lies by omission when she fails to explain fully what “off-label” means in reference to puberty blockers:

“[Puberty blockers” are approved by the Food and Drug Administration to treat precocious puberty — puberty occurring at an unusually early age — so when they are prescribed to treat transgender youth, it’s considered an off-label use…“Off-label,” the American Academy of Pediatrics noted in a 2014 statement, “does not imply an improper, illegal, contraindicated or investigational use” — it merely refers to the process of F.D.A. approval.”

Wilson, instead of looking deeper into the implications of this fact, leaves it there. Let’s be better and look into what off-label actually means. Off-label means that the approved drug is being used for a use that is unapproved by the FDA [2]:

“If you and your healthcare provider decide to use an approved drug for an unapproved use to treat your disease or medical condition, remember that FDA has not determined that the drug is safe and effective for the unapproved use.”

This also means that the use of puberty blockers is an experimental process, a fact that Wilson doesn’t even care to mention in the article. [3]

The UK High Court determined that the use of puberty blockers was experimental, and that teenagers were unlikely to be able to give their informed consent [4] [5]:

“In a stunning decision with international implications, the United Kingdom’s High Court ruled December 12 in Bell vs. Tavistock that puberty blockers (PB) and cross-sex hormone (CSH) use in gender dysphoric minors was experimental and should not, in most cases, be given to children under 16 without court order, adding that such petitioning was also advisable for 16 to 17 year olds. They clarified that the consent issue was not about the breadth and depth of information the minors were given, but that ‘There is no age appropriate way to explain to many of these children what losing their fertility or full sexual function may mean to them in later years.’”

But this is the superficial and unbalanced explanation Wilson is willing to give about puberty blockers:

“Puberty blockers are medications that suppress puberty by halting the production of estrogen or testosterone. They can stop transgender kids from experiencing the effects of puberty that may not align with their gender identities. Medically, the class of medications are called gonadotropin-releasing hormone agonists, or GnRH agonists.”

Since the FDA has not approved the use of these drugs for puberty blocking, there have been numerous, well-publicized examples of negative side effects. Lupron, a drug that is used off-label for many purposes, one of which is as a puberty blocker, has shown serious side effects [6] [7]:

“In the interviews with women who took Lupron to delay puberty or grow taller, most described depression and anxiety. Several recounted their struggles, or a daughter’s, with suicidal urges. One mother of a Lupron patient described seizures…Such complaints have recently come under scrutiny at the FDA, which regulates drug safety…The FDA is also reviewing deadly seizures stemming from the pediatric use of Lupron and other drugs in its class. While there are other drugs similar to Lupron, it is a market leader and thousands of women have joined Facebook groups or internet forums in recent years claiming that Lupron ruined their lives or left them crippled…But the FDA has yet to issue additional warnings about pediatric use, and unapproved uses of the drugs persist.”

“The 2010 study, which was submitted to the FDA, reported that seven of 55 kids had suffered serious side effects, but said the only serious side effects possibly related to Lupron were the growth of a preexisting tumor, deteriorating vision, and severe asthma exacerbation.”

According to Wilson, the use of puberty blockers can have positive side effects such as improved mental health, decrease suicidal ideation, and helps teens or minors avoid future gender changing surgeries. She lists several studies to that effect. But these kinds of studies, one of which has been debunked by the Family Research Council, are inconclusive [10]:

“[Within the study] Those who received puberty blockers were twice as likely to have had a suicide attempt resulting in inpatient care (i.e., hospitalization) in the last 12 months as those who did not (45.5 percent vs. 22.8 percent). While we cannot reach definitive conclusions because of the small numbers involved, this raises important questions that are at least worthy of further research.

Another study showed that “puberty blockers used to treat children aged 12 to 15 who have severe and persistent gender dysphoria had no significant effect on their psychological function, thoughts of self-harm, or body image…However, as expected, the children experienced reduced growth in height and bone strength by the time they finished their treatment at age 16.” [11]

The truth is that there is not enough evidence that puberty blockers create a net psychological beneficial effect on children. However, there is enough evidence to say that the physical side effects are wholly negative. For Wilson to pretend that the science has spoken the final word is disingenuous and not the job of a reporter.

Wilson also lies when she writes that these effects are reversible:

“The effects of puberty blockers are often referred to as “fully reversible,” including in both the Endocrine Society and WPATH guidelines, because of evidence showing that girls treated for precocious puberty were still able to undergo normal puberty and have children later in life.”

This is false. The Endocrine Society’s statement on the long term effects is misleading, if not a total lie, given that the FDA has not approved these conclusions, the lack of scientific evidence to back up the claim, and the evidence to the exact contrary [12]:

An amicus brief to the Supreme Court in a lawsuit against the makers of Lupron cites the work of physician Dr. David Redwine, who “conducted an exhaustive review of Respondents’ TAP/Abbott’s clinical trials’ raw data.” What he found in examining the manufacturer’s internal data is quite astounding: “62.5 percent of patients had not regained baseline estrogen levels by one year after stopping Lupron.” This means that estrogen levels of the majority of these women had not returned to normal a full year after stopping the medication. In a study of adult males who had used Lupron for the treatment of prostate cancer, it took a median average of nine months for testosterone levels to return to the normal range. However, a full 26 percent had failed to regain normal levels two years later.”

The NHS no longer says the effects of puberty blockers are reversible [13]:

“Little is known about the long-term side effects of hormone or puberty blockers in children with gender dysphoria. Although the Gender Identity Development Service (GIDS) advises this is a physically reversible treatment if stopped, it is not known what the psychological effects may be. It’s also not known whether hormone blockers affect the development of the teenage brain or children’s bones. Side effects may also include hot flushes, fatigue and mood alterations.”

The “downsides” Wilson mentions are completely downplayed with reassurances from doctors and the aforementioned lie about the effects being reversible.

“Medications are rarely without side effects,” Dr. Kremen said. “That is usually not enough of a reason to allow a child, who is telling you that they’re extremely distressed by the pubertal changes that they’re seeing, to continue going through puberty…Knowing what we do know, these medications have enormous benefits for the population that we care for,” she added.”

This section makes the reader think there is no definitive evidence yet as to the dangers of puberty blockers. Or that any perceived downsides do not outweigh the benefits. But one only needs to make a Google search to see the horrific and tragic stories of children who receive puberty blockers.

One particularly sad case has been filmed for reality TV, writes Sierra Weir [14]:

“The show “I am Jazz” documents the tragic story of Jazz Jennings, a male child who has been puberty-suppressed since he was 11. One consequence for him is genital underdevelopment that meant, when it came time to undergo his first of several “gender-affirming” “bottom surgeries,” his doctors had to take a portion of his stomach lining in order to have sufficient tissue to use to create a pseudovagina, or “neovagina” as the medical field calls it.”

Puberty blockers are anything but a positive and stable method to help children with gender dysphoria. Not only do many children grow out of these kinds of thoughts, but these methods are experimental. Wilson ignores these facts and instead publishes a piece of propaganda.