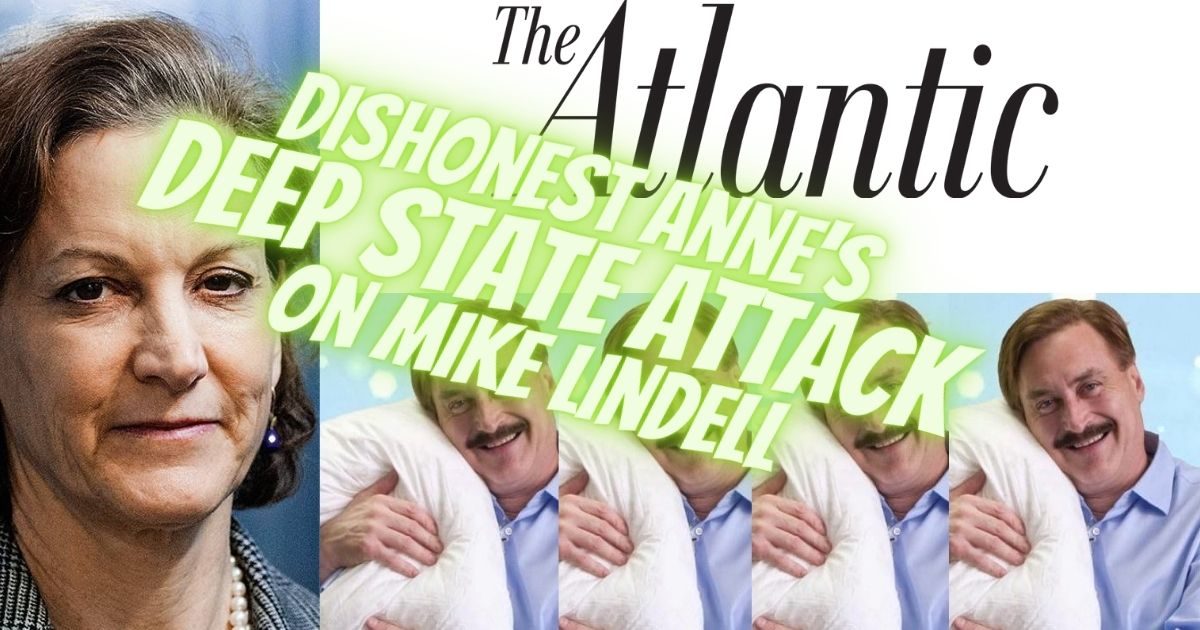 ‘Dishonest’ might be too nice of a word to describe Applebaum.

Anne Applebaum is not only a NeverTrumper, but she’s someone that went full tilt on the debunked Russia narrative after the 2016 election. In short, she spent years of her life saying stupid things, only to be revealed as a very stupid person when those stupid accusations were shown to be false.

She’s a proud globalist, a dilettante of the global power elite who, instead of oil painting to occupy her frivolous bourgeoisie time, lends it instead to invective against those who are thoroughly out of power. She’s never had a challenging statement or realization in her entire staid career.

This odd neocon leftist, often celebrated by supposed center-right foundations and outfits, salivates for war with Russia, Iran, Syria, among others. She makes her animus with Russia obvious and unvarnished with any nuance or class. The timing of her most recent work about the Holomodor, Red Famine: Stalin’s War on the Ukraine, is quite suspicious in its 2017 unveiling. It’s a timely reprinting of sorts of the original research from 1987’s “Harvest of Sorrow” by a real academic, the late Robert Conquest. [1]

And that seems to be Applebaum’s academic panache: reprint and synthesize older research while conducting almost none of your own, and then use it to get some of the most coveted credentials in the world in business, finance, media, government. It’s hard to fault her, as daddy was a biglaw partner, and mommy worked at the Corcoran art gallery. It must have been a rough childhood choosing every summer between Martha’s Vineyard and Greece.

If there is a “deep state” then Applebaum is its frumpy den mother.

And if you needed any convincing about Applebaum’s dishonesty, just do a Google image compare about the bio photo she uses these days, and a contemporary photo of her. Let’s just say even the airbrushing of Yezhov out of Soviet photos was done with more skill and subtlety.

Her purpose is made pretty plain on her own author website:

Today, Russia, the successor to the Soviet Union, has placed Ukrainian independence in its sights once more. Applebaum’s compulsively readable narrative recalls one of the worst crimes of the twentieth century, and shows how it may foreshadow a new threat to the political order in the twenty-first. [2]

She’s not really an academic, since she just largely republishes the material and research of others. She’s not really a political activist, because she’s so obviously compromised by her husband’s interests, since he works in the Polish government and was once their Minister of Foreign Affairs, and her globalist views to have any petit bourgeoisie passions for politics. She’s not really a journalist because she’s not reporting anything, just dissembling enough to earn some chortles and snorts among Manhattanites. And her agenda is pretty plain: protect the powerful, serve globalism, write yellow journalism against Russia, and preserve the billionaire ruling class. It’s only surprising that she hasn’t managed to tattoo that new motto on the Atlantic’s masthead.

Anyway, this is the person who is going to give us her opinion on MyPillow guy Mike Lindell’s efforts to undercover and prove voter fraud in the 2020 election.

The entire article is worthy of examination for how it avoids using facts that could be easily disproven, but still manages to nitpick and malign Mike Lindell.

Let’s start with one simple example:

We have identified before the typical tactic of journalism malpractice we call “guilty grouping.” That is to say, when a writer or “academic” like Applesauce takes an unrelated list and groups them together with the subject, to make it seem like the subject is guilty. It’s guilt by association by just putting them together. So, imagine if I pointed out the odd similarities between Walter Duranty, who also published Soviet trash propaganda in elite media outlets, Ilya Ehrenburg whose Soviet propaganda demanding every Soviet soldier to murder every German child they met, and Anne Applebaum who publishes along an ideology where she is meant to destroy her opponents with the abuse of language in the same way as the other two, you’d think that might be a bit unfair to kind of group her in that same league, that same category if you will.

Here’s how she plies that trick, ‘guilty grouping’:

Wacky though it seems for a businessman to invest so much in a conspiracy theory, there are important historical precedents. Think of Olof Aschberg, the Swedish banker who helped finance the Bolshevik revolution, allegedly melting down the bars of gold that Lenin’s comrades stole in train robberies and reselling them, unmarked, on European exchanges. Or Henry Ford, whose infamous anti-Semitic tract, The International Jew, was widely read in Nazi Germany, including by Hitler himself. Plenty of successful, wealthy people think that their knowledge of production technology or private equity gives them clairvoyant insight into politics. But Aschberg, Ford, and Lindell represent the extreme edge of that phenomenon: Their business success gives them the confidence to promote malevolent conspiracy theories, and the means to reach wide audiences.

See, she doesn’t need to say that he’s a businessman who will cause millions of deaths, she can just link him to Olof Aschberg.

She doesn’t need to say he’s anti-Semitic, she just needs to say he’s a businessman like Henry Ford who wants to be involved in politics.

He’s just one of the “plenty of successful, wealthy people” and oh by the way, weren’t all those other successful people just terrible monsters!

Let’s take a simple verifiable fact from her article.

He has booked, he says variously, “1,000 hotel rooms” or “all the hotel rooms in the city” to accommodate them. (As of Wednesday, Booking.com was still showing plenty of rooms available in Sioux Falls.)

Well, how many hotel rooms are in Sioux Falls? Is 1000 a lot or a few? She does a lazy, sloppy Booking.com search and concludes there are still “plenty of rooms” available.

With just a little research, I was able to discover that, via the Sioux Falls tourism board,  [3]

that Sioux Falls boasts 61 hotels and 5,446 rooms. [4] Not to mention AirBNB [5] and other similar VRBO options. So, booking a thousand rooms during a summer week would probably leave “plenty of rooms” still available for other people.

But even on Booking.com, you can tell there is less availability that week. This is what Applebaum considered sufficient research: a simple query on Booking.com. [6]

And there are 42 properties found with 88 remaining rooms while noting 19 locations do not specify how many remaining rooms. If you compare to other weeks, it’s clear that the week Lindell is planning his conference does, indeed, have many less rooms available.

But this phrase, and her lazy Booking.com search, allows Applebaum to act like she’s discrediting and debunking Lindell. It’s a way of saying that since he’s sloppy on the number of hotel rooms, he’s probably similarly sloppy on the way he’s counting and evaluating voter fraud.

Nothing in her article shows Lindell actually wrong on any given point. She argues he’s not technically persecuted. She complains that he doesn’t like Uyghur chicken kebabs. She mocks him for not knowing who the Uyghurs are.

She comes nowhere near, at any point in her article, to proving her lying headline:

In the time I spent with Mike Lindell, I came to learn that he is affable, devout, philanthropic—and a clear threat to the nation.

She doesn’t even bother to explain her thesis and headline. Lindell is going to ‘destroy Democracy’ because he’s… charismatic? Because he’s Minnesota polite and picked up the check at the restaurant she chose? Because… she doesn’t give a reason.

She doesn’t even give a coherent thesis to why he’s a threat to the nation, or even bother to trot out the tired narratives about the impact and effect of misinformation. She’s too lazy for even that.

And for all her bromides, she can’t see the obvious, which is that Lindell is an honest man who is passionate about uncovering truth. And in this moment he’s a relatively powerless person even though he has wealth and means. Lindell can’t even get Fox to advertise his documentary. Lindell can’t even keep his pillows in Kohl’s. Is Lindell going to have a greater ability to affect the life of American democracy than he is the lifetime relationship with the Fox advertising department?

Applebaum has no problem blaming the powerless though, because for her it makes for good snark in her article to send to all her friends and fellow elites. Her entire article was a smear of a good man, who by all accounts runs an honest company and who sincerely and genuinely believes there was voter fraud in the 2020 election.