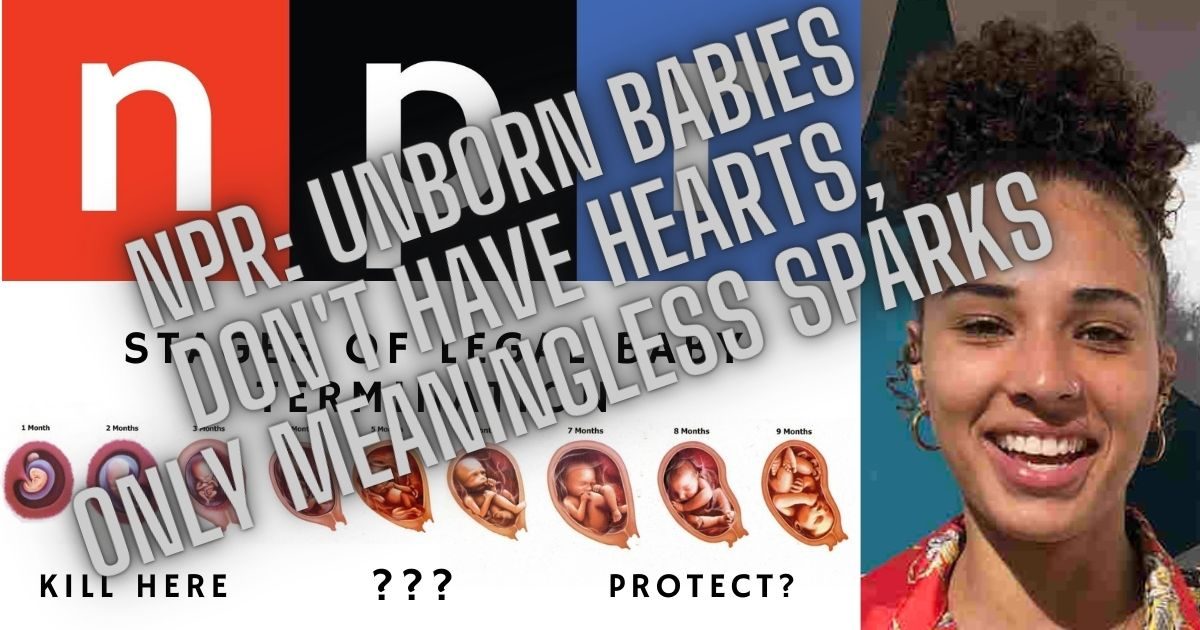 NPR’s Social Media Associate collapsed a quote within a story, removing important context, in order to score political points with their posting. In so doing, she made the quote worse, making a point it wasn’t really making in the first place, and further confusing the already confused regular readers and listeners of National Public Radio.

A baby has a heartbeat and is not just a sac of electrical signals, but then almost everyone who isn’t NPR knows that.

Here’s the offending succinct clip of the article that was posted by the social media manager at NPR, whom we are assuming is Sommer Hill, but will correct this story if that is incorrect. The staff listing at NPR, besides being a who’s who in Transgender Marxism, only lists her/she/them/it/whatever-people-are-calling-other-people-these-days, as responsible for NPR’s social media. Texas law bans abortions after a “fetal heartbeat” is detected, but doctors say that term isn’t based in science. What an ultrasound detects in an embryo at 6 weeks is electrical activity from cells — not a heart.

And that sound? It’s made by the machine. Now, I’m not saying that baby looks like he’s ready to go out and sell vacuum cleaners door to door, but obviously that’s not a ‘clump of cells’ and the heartbeat that is detected in this baby is probably related to its heart.

And what is going on is that the baby’s heart is developing in the womb, it is growing its heart. The ‘electrical activity’ is from its heart starting to beat. That beating will change as it grows into a more developed heart, which happens by week 10.

Let me restate that to give it the proper emphasis: the Texas ban is at 6 weeks, where left-wing pro-abortion NPR says is not a heartbeat, but by all accounts the unborn baby’s heart is fully developed within four more weeks, at week 10 for baby development.

NPR is being fundamentally dishonest and missing major context by not explaining when the heart is fully developed.

And if the doctors cannot find a heartbeat, doctors will tell expecting mothers to come back in two weeks but that is often the sign of a miscarriage. So if it’s just ‘electrical signals’ then why is it considered so paramount for doctors to find the heartbeat and give the mother the guarantee that its there and healthy?

If these were merely ‘electrical impulses’ then why are they looking for a very precise reading on the fetal heart rate at being 103-126 beats per minute? [5]

The only reason we’re having this discussion is because the militantly pro-abortion folks are so wrong on everything, so wrong on science, so wrong on morals, so wrong on the whole range of things, that they have to fight about semantics because to admit the baby has a heartbeat is to admit that the thing they dehumanize as a ‘clump of cells’ and a ‘sac’ and whatever else, is a clearly developing human being.

Personally, I’m only pro-abortion when it comes to the media.

But what clearly happened in this snippet is that the social media associate, again I’m assuming its Sommer Hill, clipped out a longer quote from the NPR article written by Selena Simmons-Duffin. [6] The relevant quote is here:

“When I use a stethoscope to listen to an [adult] patient’s heart, the sound that I’m hearing is caused by the opening and closing of the cardiac valves,” says Dr. Nisha Verma, an OB-GYN who specializes in abortion care and works at the American College of Obstetricians and Gynecologists.

The sound generated by an ultrasound in very early pregnancy is quite different, she says.

“At six weeks of gestation, those valves don’t exist,” she explains. “The flickering that we’re seeing on the ultrasound that early in the development of the pregnancy is actually electrical activity, and the sound that you ‘hear’ is actually manufactured by the ultrasound machine.”

So clearly what’s happened here is that the Social Media manager wanted to take half of that quote and use it to make a point. But in so doing she lost the context of the contrast with a stethoscope and an ultrasound heart monitor, and awkwardly tried to say that babies didn’t have heartbeats as a result.

What the OB-GYN quoted fails to note, as well, is that the baby’s heart fully develops within a month, and the ability to monitor a heartbeat with a machine versus a stethoscope isn’t a meaningful distinction.

A stethoscope also listens to the quality of airflow in the lungs. A baby is receiving oxygen from the mother’s umbilical cord, but it is not breathing per se, although babies do ‘practice breathing’ in the womb later in the pregnancy. [7] Just because you can’t hear something on a stethoscope doesn’t mean that the biological function isn’t happening in the child, whether its a heartbeat or breathing.