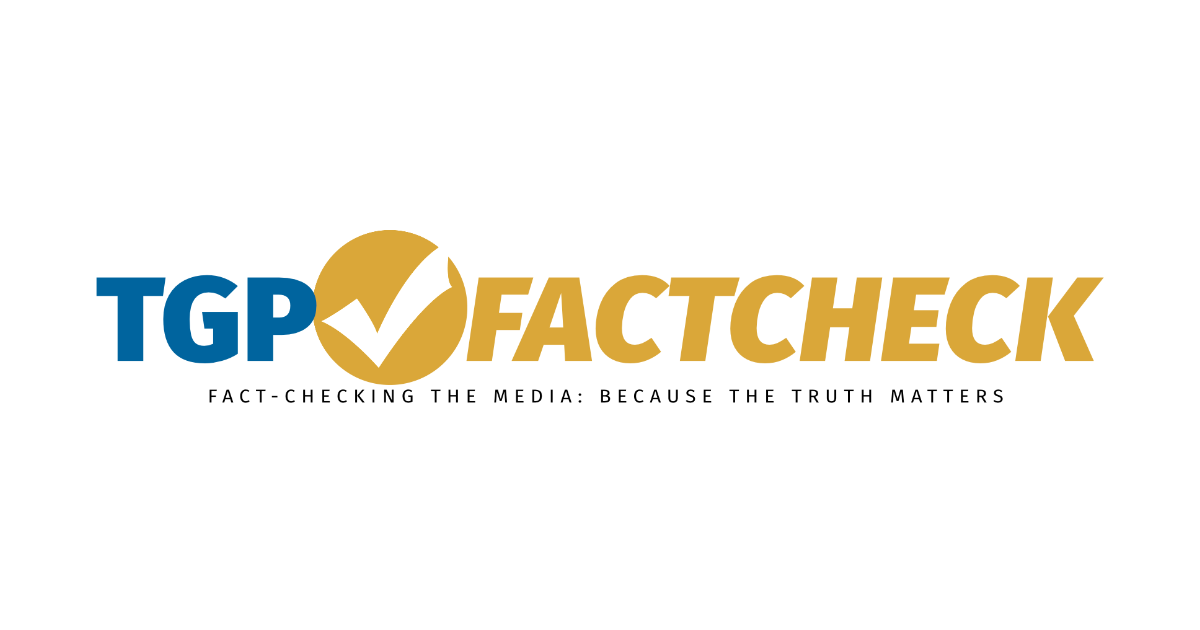 TGP FactCheck: Fact-Checking the Media: Because the Truth Matters

Here are the key ones that he seems to have identified:

What’s amusing is that events of the last month have proven Sen. Cruz right and Wade completely wrong.

But of course Wade was wrong in the first place, as we’ll discuss.

Let’s start by using concrete definitions for these three terms.

“Violence” is typically understood as “the use of physical force so as to injure, abuse, damage, or destroy.” [1]

“Violent Insurrection” is a phrase describing a group of people. A group of ‘insurrectionists’ are typically understood to be a group of people engaged in “an act or instance of revolting against civil authority or an established government.” [2]

Here’s how Peter Wade starts his article on the topic:

Republican Sen. Ted Cruz seems very confused about the definition of violence. In a Sunday interview, he characterized peaceful pro-choice protesters standing outside the homes of Supreme Court justices as “violent.” But when Senate Minority Leader Mitch McConnell called the attack on the Capitol on Jan. 6 a “violent insurrection,” Cruz said he strongly disagreed.

Now we can start off by excusing Peter Wade for not knowing on May 8th that a pro-abortion assassin would actually show up to Supreme Court Justice Kavanaugh’s house a month later on June 8th with a weapon and the intent to kill him and his family. [4]

And we can excuse Reporter Wade for not realizing that a string of firebombings against pro-life organizations would happen by a pro-abortion domestic terrorist group calling itself “Jane’s Revenge.” [5][6]

The Dobbs decision, potentially overruling Roe v. Wade, was leaked on May 2nd. [7]

But pro-abortion violence had already occurred by May 8th and Peter Wade was just blithely ignorant of it. A list of pro-life attacks has been compiled by the Family Research Council. [8] You can notice that several were prior to May 8.

Anyhow, the first question is whether this is an accurate quote by Senator Cruz.

The second question is whether a group of people standing outside a Supreme Court Justice’s home is a violent act or an implied violent threat.

The third question is whether the January 6th protests were a ‘violent insurrection’ as alleged.

As to the first question, this is not an accurate quote by Ted Cruz. This is a major misinterpretation of source material.

Here are four key statements, excerpted by MSNBC, as to what Sen. Cruz said:

Cruz 1: “What we’re seeing, these images, are the latest manifestation of just how extreme, just how radical the Democratic Party is getting.”

Cruz 3: “These thugs have no business at the private homes of any government officials. These Supreme Court Justices or anyone else.”

Cruz 4: “On January 6th of 2021 you had tens of thousands of people peacefully protesting. And yet the corporate media and Democrats slandered them with the made-up term of ‘insurrectionist’ and yet in this instance, they are not willing to call off their goons.

Compare these four statements again to what Rolling Stone said was an an accurate quote.

In a Sunday interview, he characterized peaceful pro-choice protesters standing outside the homes of Supreme Court justices as “violent.”

Sen. Cruz said they were ‘thugs’ and said that they were ‘intimidating’ justices. But he did not say they were being violent. That is a complete quote fabrication.

.Cruz did NOT say that the protesters outside Justice Kavanaugh’s home were being ‘violent.’ He noted that the political left has begun to embrace political violence for the sake of reaching a conclusion they desire. As a movement, as a wider group of politically-engaged people, they are legitimizing violence.

And that leads us to the second question: whether a group of people standing outside a Supreme Court Justice’s home is a violent act or an implied violent threat.

By personalizing politics to the point where you protest at an individual Justice’s house, you are indeed doing that: creating an implied threat. The protesters are not showing up to the workplace or to the respective institution that the Justice represents, they are showing up to their home where they have a family and are meant to relax and enjoy a private life.

The point in protesting at a politician’s home is to make an implicitly violent threat: we know where you live, and we are coming after you and those around you personally.

Even the Washington Post had to begrudgingly admit that these protests were probably illegal, because they seek to influence and sway a judge’s future decisions. [10] Not hard to think that the reason it’s illegal is because it’s a form of an implied threat.

The annual March for Life happens in Washington DC each January, home to 9 Supreme Court Justices. I cannot find any instance where pro-life protesters protested outside the homes of pro-abortion justices, such as Sonia Sotomayor, Elena Kagan, Stephen Breyer, or John Roberts. In fact, I can’t find any instance in the past where a similar event happened. Pro-Lifers did protest occasionally outside the home of abortionists who performed abortions. [11]

The third key question at the heart of the article is whether the January 6th Capitol protest was ‘peaceful’ or ‘violent.’

Many who were there describe most of the so-called ‘violence’ as defensive in nature because the police response was wildly disproportionate. [12] Most of the claims of violence center around the death of Officer Brian Sicknick, who was not injured at all during the protests and his death has been a long-running left-wing disinformation campaign. The Capitol Police were firing tear gas and rubber bullets into a crowd of people gathered to hear Trump speak.

If it was a ‘violent insurrection’ then the assembled crowd clearly lacked the intent to upend the government. Some broke windows and damaged property, estimates range from between $1.5 [13] and $30 million dollars worth [14], but it is also notable that the Capitol authorities refuse to release an itemized list of what the damage was.

There was certainly violence used by both police and protesters at the Capitol protest, but it seems extreme to categorize all of those present as being part of a violent insurrection. Clearly that is not the case. People who were protesting on the National Mall a few hours prior and were expecting to hear Trump speak, were not secretly plotting to overthrow the government.

This is left-wing fantasy unsupported by the evidence.

As but one proxy to determine the ‘violent’ nature of the protests, the convictions so far for January 6th participants has a median sentence length of 45 days. [15] The most serious cases involve people who threw random objects such as pieces of wood, water bottles, beer cans, batteries, orange traffic barriers and fire extinguishers, at the police. One used a metal baton on the police. One 72 year old man from Alabama had a lot of guns in his truck.

Rolling Stone wants us to believe that out of those 120,000 people, they collectively planned to overthrow the government of the United States by throwing batteries, water bottles, and beer cans at the police.

It’s also notable that the media standard practice for discussing violence at a political event is typically to downplay it if it is left-wing. This is where the ‘mostly peaceful protest’ meme came from. [17]

That is the “violent insurrection” they can’t stop talking about for years.

They want to impose collective guilt on 120,000 people by smearing them with wordplay.

There were violent people protesting on January 6th, but their violence was extremely mild. The police response was just as violent, if not more so.

It’s extremely dishonest to call the January 6th protest by 120,000 people a ‘violent insurrection’ because of the isolated bad actions of a few people.

The senator went on to say that Americans are “sharply divided” on the issue of abortion. But according to a CNN poll from just a few months ago, seven in ten Americans do not want Roe v. Wade overturned.

This contrasts with more established and respected polling firms like Gallup, who says 58% of the public does not want to overturn Roe v. Wade. [x] Even left-wing NPR says that number is 64% opposed to overturning Roe. [x]

What’s interesting is that while those numbers say they want abortion rights preserved, Pew research shows a strong 38% of Americans also want abortion outlawed in almost every case. [x] That is major missing context from the article, because it portrays only one side of the debate.

The central point that Rolling Stone is making is that America is not divided, or at least not evenly divided, but a 60-40 split isn’t a mandate either. Rolling Stone’s coverage here is unbalanced in that it presents only the dominant left-wing viewpoint and then marginalizes all others, all dissent from that one party line.

It’s also worth noting that the Roe decision conferring abortion rights was paired with a same-day Supreme Court case release of the Doe v. Bolton decision [x] that legalized abortion for any reason. Roe created the familiar trimester system framework that said states could regulate and ban third trimester abortions, and might have a motive to ban second trimester abortions, but the Doe decision gave every excuse possible so that a woman could get an abortion at any time in her pregnancy.

So when polling says that Americans want to preserve Roe, it is usually an indication that those being polled and those writing about those polls don’t realize how much more restrictive the Roe decision would be for current abortion rights if followed without the Doe decision. If you read Roe in isolation, you would think the states could ban abortions, and you would have a misinformed opinion about the state of abortion laws. America has the most liberal abortion laws in the world. [x] [x]