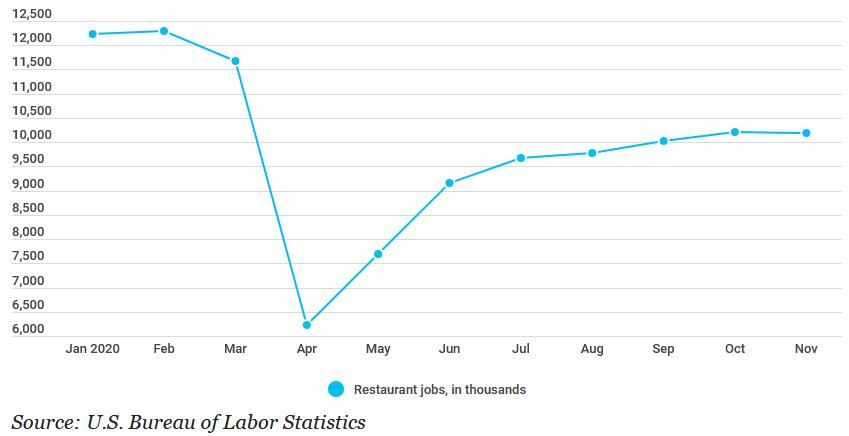 By Jonathan Maze of Restaurant Business

The restaurant industry lost 17,400 jobs in November, according to new data from the U.S. Department of Labor released on Friday.

It was the first monthly decline in the number of restaurant workers since April, suggesting that a renewed virus and state shutdowns of dine-in service are taking their toll.

The data is likely to increase pressure on Congress and the president to approve a new stimulus package, one that includes specific aid to independent restaurants that have been devastated by the pandemic.

The industry had been adding jobs at a rapid clip since May, as restaurants reopened dining rooms and expanded while consumers grew more comfortable with dining out. But it remains far below its pre-pandemic levels and now the industry is going backward again.

In other words, the industry would have to increase its employment by another 20% just to get back to February levels.

It’s the latest in a series of data points suggesting the restaurant industry is feeling the impact of another virus surge—sales slowed last month at full-service restaurants while consumers shifted back into quarantine mode following a summer in which their dining increased.

The problems with the restaurant business are affecting the economy as a whole, too—eliminating a source of job growth that has been key to its recovery from the pandemic-fueled recession.

The economy added 245,000 jobs in November. That number would be strong in a normal year, but right now it remains a significant slowdown. There are more than 9 million fewer jobs today than there was a year ago.

The unemployment rate ticked down to 6.7% in November—that decline was largely due to people leaving the labor force, rather than job creation.