“Remember, Remember, The 5th Of November…”

“Remember, Remember, The 5th Of November…”

Authored by Gloria Moss via Off-Guardian.org,

While not obviously connected in any way the juxtaposition reminds us that official narratives always require interrogation and always will.

According to historians of the gunpowder plot, the official story of this event concealed the extent to which the British establishment of the day may have enhanced their popularity and personal profits by pushing a version of events that drew Britain into decades of profitable war against Catholic Spain and Portugal. Most recently, this view has been expressed by John Hamer (in his Falsification of History) and by Webster Tarpley (in his videos about the Gunpowder Plot ). The earliest and fullest account however occurs in John Gerard’s 1897 book, What was the Gunpowder Plot?

Gerard’s detailed investigation concludes that “the government consistently falsified the story”. Since this is the earliest account to openly declare this, and since it predates the CIA’s label of ‘conspiracy theory’ by some seventy years, it is worth reviewing the evidence underpinning this statement. For, understanding the context will highlight the problems that undermine the faithful reporting of events.

So, within the constraints of this article, we will look at a sample of the evidence presented by Gerard and follow-up by considering the lessons for the current government’s handling of the second lockdown decision. Before looking at the anomalies highlighted by Gerard, let us remind ourselves of the main elements in the official narrative.

According to the story released by Sir Robert Cecil in November 1605, there was a Catholic conspiracy in 1605 to blow up the House of Lords on 5 November, one that involved thirteen men and extended up to the Papacy itself. The conspirators had allegedly constructed a tunnel to a cellar in Westminster Palace, in which 36 barrels of gunpowder were left with a view to blowing up Parliament.

Part of the official story also recounted how the plot was revealed ten days before the opening of Parliament on 5 November in a letter delivered to a Lord Monteagle. This allowed the plot to be ‘foiled’ at midnight on 4 November. Guy Fawkes had allegedly planned his getaway to Flanders, but he and his co-conspirators were instead executed, and the English peace treaty with Spain, signed in 1604, was sidelined allowed to give way to a century of war between the two countries.

In fact, so great was the perceived threat to national security that it was officially compulsory in Britain until 1859 to celebrate ‘Guy Fawkes Day’ on 5 November.

Does the official story stand up to scrutiny? In 1897 John Gerard opined that

the official narrative bristles with contradictions…and with falsehoods.

Gerard highlighted a number of anomalies. Below are some of the most notable.

ANOMALIES IN THE OFFICIAL NARRATIVE

In terms of the official motives for the attack – the destruction of Parliament – Gerard quite reasonably asks why Catholic plotters would wish to blow up Parliament when it housed not only Protestants but also all of the country’s leading Catholics? He asks moreover why, if the plot was foiled at midnight on 4 November, when 36 barrels of gunpowder had been left in the ‘cellar’ under the House of Lords, [couple of words removed here] the opening of Parliament was allowed to proceed on 5 November. For, he reports that there is no evidence that [delete several words] the barrels had been removed.

These are important points concerning the motives but the anomalies do not stop there. For Gerard goes on to highlight an extraordinary number of these, with just a small sample summarised in the following nine points:

Gerard’s doubts were voiced nearly three hundred years earlier in 1605. So, the Bishop of Armagh and primate of All Ireland, a prolific scholar and church leader, was heard to say that if the papists knew what he knew, the blame of the Gunpowder Treason would not lie with them. Then, ten years later in 1615, a spy, Floyde, testified to having frequently heard various Jesuits say that the government were aware of the plot several months before they thought fit to ‘discover’ it. Moreover, there was a death-bed confession by the servant of one of the alleged conspirators, Robert Catesby, that he and Sir Robert Cecil met on three separate occasions in the period leading up to the night of 5 November.

Now to the second event happening at midnight on 4/5 November, the second lockdown. The decision to lockdown Britain for a second time is one that is supported, like the official gunpowder plot narrative, by a story of fear and terror but in fact, perusal of official statistics and the legalities of the lockdown point to a lack of logic and evidence and an inappropriate use of the law. Taking the statistics first, weekly deaths during the previous lockdown were 4,000 -10,000 times higher than in the previous 3 months when coronavirus deaths were in fact 5% below average rates. Then, in the period of July to September following lockdown, weekly deaths fell to 1-2% below average, showing that the experience of lockdown precipitates, not diminishes deaths (see the official figures below). 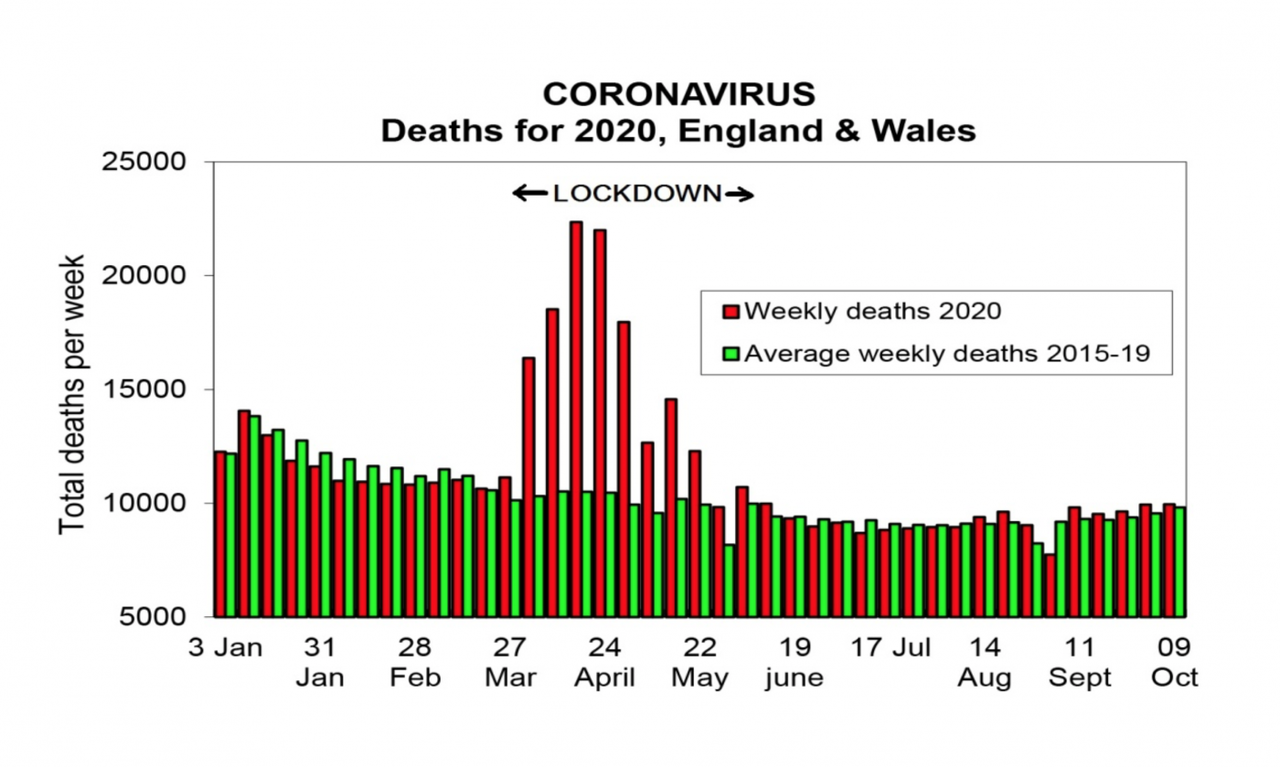 It is only fair to ask then why any government should recommend a second lockdown when the first one only triggered a sharp rise in deaths. In terms of the legal argument, Lord Sumption has soundly rebuked the government for failing to use the Civil Contingencies Act, imagining that they did this in order to escape scrutiny. He went on to say that the government has misused the Public Health Act 2008 and the new Coronavirus Act since these both allow the isolation of sick persons but not of healthy people.

So, what lessons can be drawn from a comparison of the Gunpowder plot and the events leading up to a second lockdown on 4/5 November? As we have seen, the official story of the gunpowder plot is one that collapses on even cursory scrutiny. The anti-Catholic sentiment that this gave rise to spearheaded a hundred years of war against Spain and Portugal, with profitable gains to Britain. Moreover, Sir Robert Cecil, a key actor in the drama, was a member of an influential London group informally known as ‘the war party’. This group wanted to push James into a confrontation with the Spanish Empire, from which the group’s members hoped, among other things, to extract great personal profit. So there was a clear conflict of interests here.

In terms of the decision to pursue a [words removed here’] a second lockdown, the four men involved were: the PM, the Chief Medical Office (Professor Chris Whitty), The Chief Scientific Officer (Sir Patrick Vallance) and the Chancellor (Rishi Sunak). At least three of these could be said to have conflicted interests in a decision to extend lockdown.

Firstly, the PM because of the profits that his father stands to make from his novel, ‘The Virus’ that was republished in spring 2020 following its earlier publication in 1982.

Then, Sir Patrick Vallance because of his substantial shareholding in GSK, the pharmaceutical company that with Sanofi will supply 200 million doses of their Covid vaccine to a global inoculation scheme.

Finally, Chris Whitty since he received a £31K grant from the Bill and Melinda Gates Foundation, a group heavily invested in the creation of a PCR test and vaccine.

Interestingly the only person without immediate and obvious vested interests, Sunak, was reportedly hostile to the idea of a lockdown.

This is not to automatically impugn the other three men but merely to state that 415 years have perhaps not done much to add the kind of checks and balances to decision-making that would guarantee transparency within government and ensure that self-interest plays no part in decision-making.

In 1605, the misrepresentation of events led to the persecution of Catholics in England and beyond its shores. In 2020, the decision to impose lockdown at just after midnight on 4 November is one that will affect everyone in Britain and extend the economic war waged against the people. It is time that people learn from the lessons of the Gunpowder plot and fight for the replacement of a system that lacks transparency with one that will offer the checks and balances appropriate to a modern democracy.