Reason Debunks Half of an Afghanistan Meme, Overlooks the Other Half 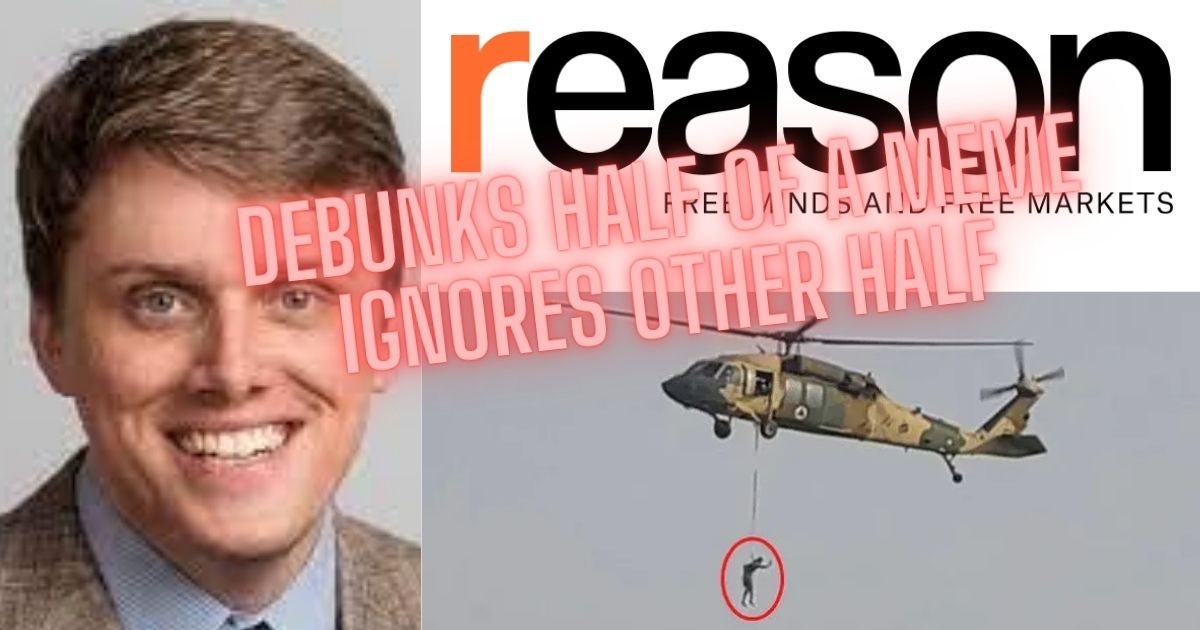 Ideological outlets like Reason, and even more extreme ones like the Washington Post, often love ‘debunking’ a claim from their ideological opponents without considering alternative explanations and other rational interpretations.

Eric Boehm, an Assistant Editor at the libertarian Reason site, correctly pointed out that video of the Taliban supposed hanging someone was false. But what he left out of his analysis was that the Biden administration tried to defuse their failure to remove US military equipment by saying the Taliban would be unable to use such equipment. Biden’s extremely negligent actions in leaving US military equipment behind was excused by essentially saying the Taliban would never be able to use complicated equipment like Blackhawk helicopters.

Here’s what Boehm reported in his first few paragraphs:

Around the same time that the last U.S. soldier was leaving Afghanistan on Monday evening, a video showing a man dangling from a Blackhawk helicopter began to go viral on Twitter.

The original post claimed that the video showed a man being executed by the Taliban in the skies above Kandahar, Afghanistan.

Thankfully, that does not seem to be true. Other videos of the same Blackhawk—and a close examination of the first video—show that the man is attached to the helicopter with a harness rather than a noose. At one point, he seems to wave to someone inside the helicopter. While it’s not clear exactly what is happening in the video, it seems safe to say that no one is being horrifically executed.

All of this is true and Boehm is correct that the video was being initially misrepresented.

Here is where Boehm jumps the shark in order to make tired libertarian talking points:

As I’ve written before, the Taliban have their hands on all that equipment because America invaded, not because the Biden administration finally brought the 20-year war to an end. Advocating for remaining in Afghanistan longer means advocating for sending more military gear to Afghanistan, some of which will inevitably be lost, stolen, or handed over to the very people America has spent nearly two decades unsuccessfully trying to oust from power.

The viral video of the hanging-that-wasn’t is a good reminder of one of the basic rules of online political warfare. If a contextless video or post seems to confirm all of your biases, it’s best to double-check before spreading it around.

There’s a significant danger when any organization, for ideological reasons, ‘debunks’ a video putting a certain smear on the video that it is all untrue.

Readers, the general public, often do not capture the subtle points made in a fact check or a debunking article. When you debunk half of a video, often people think something debunked is wholly wrong. Meaning that when Boehm debunks the article only about whether it presents an execution, they also naturally take away that the video does not show the Taliban flying a Blackhawk helicopter either. Being precise and very clear about what is being ‘debunked’ and proven wrong is critical.

Boehm even admits that the central discussion is about Biden’s decision to leave military equipment behind. On this point Boehm offers nothing but libertarianism and let’s highlight it again:

the Taliban have their hands on all that equipment because America invaded, not because the Biden administration finally brought the 20-year war to an end.

This is just simply not true. It’s not even half true. It’s completely incorrect. It’s the alignment of a libertarian talking point with the fantasy projection of what’s going on. Biden is to blame. Wars can be brought to a conclusion without handing a hostile adversary critical military equipment. The Taliban did not acquire this hardware through military conquest, they did not receive it as part of a peace treaty, they did not buy it on the international market: they got it because Joe Biden left it behind without a plan.

News since the Afghanistan debacle even further cements this point, as General Milley seems to now claim that he gave Biden a serious withdrawal proposal and it was rejected.

And the Pentagon was saying that the aircraft that was left behind ‘would never fly again’ yet the ‘debunked’ video showed that to be a lie.

Marine Gen. Kenneth McKenzie, head of U.S. Central Command, said some of the equipment had been “demilitarized,” essentially rendered inoperable. Troops probably used thermate grenades, which burn at temperatures of 4,000 degrees, to destroy key components of the equipment, according to a defense department official who was not authorized to speak publicly.

On the airstrip, the military left 73 aircraft. McKenzie didn’t specify what kinds of aircraft, whether helicopter or fixed-wing.

“Those aircraft will never fly again,” he said. Pentagon officials acknowledged, and photos showed, that the soldiers operated Apache attack helicopters at the airport. [1]

So Boehm is misrepresenting that the debate about the Taliban Blackhawk viral video was merely about whether or not it was showing an execution. That was the primary interpretation, but necessary context required discussing that it was an ongoing Pentagon lie that these aircraft were unable to be piloted by the Taliban.

Here’s another presentation of that Pentagon lie: [2]

Pentagon spokesman John Kirby acknowledged on Tuesday that a lot of US equipment with “a lethality component to it” has fallen into Taliban hands, but said it doesn’t pose a threat to the US or neighboring countries.

“These are not the kinds of things that the Taliban can make great strategic use out of,” Kirby told reporters.

So, again, it was a very pressing question about whether this equipment was able to be fielded by the Taliban.

The video at the least proves that they can and could use the weapons left behind for whatever purpose they want, fixing things with a guy on a harness, or executions. The video confirmed these fears by showing both the Pentagon lie but also the Taliban return to its notorious violence.

Thankfully the Taliban violence may not have returned to the violence, but for Boehm to ignore the first part of the story, while referring to it in the second part of his article, was dishonest.

We aren’t going to ding it any more than to say it was sloppy, but it feels deceptive and malicious. It should also be noted that Boehm’s ideological interest is to minimize and mitigate the costs of withdrawing/abandoning Afghanistan. So he has an agenda in debunking, minimizing and mitigating the costs of Biden’s failure.