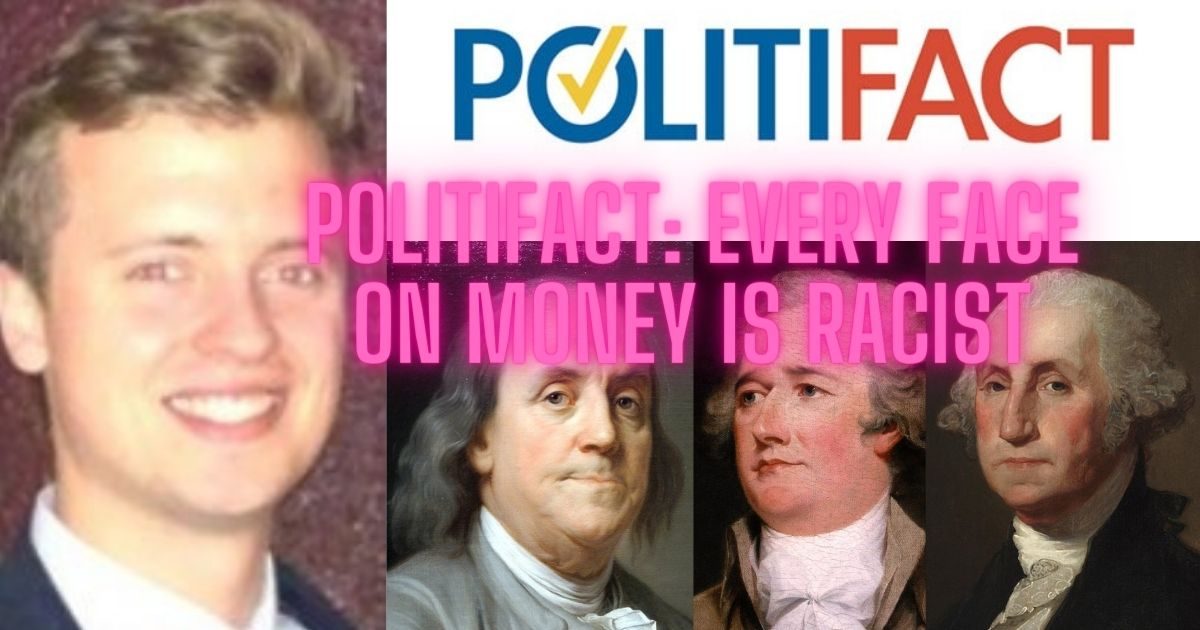 Kayleigh McEnany made the claim that the main Founding Fathers were against slavery:

McCarthy rates this claim “mostly false” because “Five historians who spoke with PolitiFact agreed that McEnany’s claim was an inaccurate oversimplification.”

This is an opinion held as a fact. Neither McCarthy nor his sources take into account the historical, economic, and social context of the time that dictates the Founders’ personal and public positions on slavery. McCarthy misrepresents the Founders’ views on slavery by ignoring the situation they faced.

McCarthy mentions that Adams never owned slaves and was vehemently opposed to the idea. Franklin eventually freed his slaves and became president of the Pennsylvania Abolition Society. Two other founding Fathers mentioned, John Jay and Gouvenor Morris, were also against slavery: Jay signed a law to gradually abolish slavery in New York and Morris pushed for emancipation in New York.

Paul Finkelman, one of McCarthy’s own sources, writes about the views of Morris [1]:

“Connecting the right to import slaves with the Three-Fifths Clause, Gouverneur Morris, who represented Pennsylvania at the Convention, exploded at this betrayal of the ideals of the Revolution:

‘[W]hen fairly explained [the compromise on the slave trade and the Three-Fifths Clause] comes to this: that the inhabitant of Georgia and South Carolina who goes to the Coast of Africa, and in defiance of the most sacred laws of humanity tears away his fellow creatures from their dearest connections and damns them to the most cruel bondages, shall have more votes in a Government instituted for protection of the rights of mankind, than the Citizen of Pennsylvania or New Jersey who views with a laudable horror, so nefarious a practice.’”

Here’s what he has to say about Hamilton:

Hamilton, for example, was a founder of the New York Manumission Society, an anti-slavery group. But he married into a slave-owning family and may have owned at least two people himself. He also supported several Federalist Party slaveholders as presidential candidates.”

To be the founder of an anti-slavery group certainly means Hamilton was against slavery. To say that marrying into a slave-owning family and supporting candidates who owned slaves discredits his opposition to slavery is ahistorical and opinion disguised as fact. Does McCarthy really mean to blame Hamilton for choosing a wife whose family owned slaves? That is collective guilt, plain and simple.

To say that Hamilton supported slavery simply because he supported people who owned slaves is an interpretation of that decision.

An equally legitimate interpretation is that Hamilton, during the Federalist election of 1801, supported slaveholder Thomas Jefferson in the tie for president between Jefferson and Aaron Burr to keep Burr, who was far more ambitious for power. [2] In fact, Hamilton and Jefferson had been vicious political enemies for some time. Hamilton also supported John Adams for president at one point, and Adams did not own slaves. So, it seem personal relations and political support went both ways for Hamilton and thus cannot be extrapolated to his views on slavery. He was not a single-issue voter, along with most others.

We rate the claim that Hamilton was racist, false.

As for George Washington, McCarthy reports the facts but then comes up with an unreasonable and biased conclusion:

“Washington, the nation’s first president, owned hundreds of enslaved people, though he ultimately freed them in his will. Thanks in large part to his friend the Marquis de Lafayette, Washington came to oppose slavery. He once said that he wished to see a plan for the abolition of the institution.”

Any reasonable person, without any preconceptions about the Founding Fathers, would read these facts and conclude that Washington died believing slavery was wrong and wished to abolish the institution. Washington’s own statements reflect his changing view on slavery [3]:

“I never mean (unless some particular circumstance should compel me to it) to possess another slave by purchase: it being among my first wishes to see some plan adopted by the legislature by which slavery in the Country may be abolished by slow, sure, & imperceptible degrees.”

How exactly does McCarthy discredit this? The answer is that he doesn’t. He simply drops a mixed message about several founding Fathers and then concludes that McEnany’s statement is mostly false.

McCarthy instead relies on biased historians who make tired and unscholarly arguments about the Founding Fathers.

Overall, McEnany’s claim about the Founding Fathers is “contradicted by the lack of substantive action on the part of the Founders to end slavery,” said Estes, from Oakland University…”Many slaveholders claimed to hate the institution of slavery and the slave trade and decried their dependence on slave labor,” Estes said. “Yet, (they) did little or nothing to abolish the institution or even to reduce their and others’ dependence on slavery.”

McCarthy’s final word is an obtuse and unscholarly opinion about the Founding from Finkelman:

“Finkelman said, ‘If the Founding Fathers thought slavery was wrong and was evil, why didn’t they end it?’

Finkelman’s question and Estes’ criticism about a lack of substantive action is bush-league. Those criticisms could be dismissed by a high schooler with any legitimate historical knowledge of the Founding of America. The fact is this: a united States of America required slavery not be outright abolished because the South would not budge on the issue. It was a necessary evil that the Founding Fathers had to allow so that America could be united and, eventually and gradually, abolish slavery.

The historians mentioned are anything but unbiased or traditional in their outlook on American history. Instead, they espouse views on the Founding that are more controversial than McCarthy would have us believe. They have not been the consensus opinion for centuries. It’s only until recently that the American Founding was denounced as racist. [4]

For many of the Founding Fathers, speaking out against slavery publicly could have torn the country apart, and, in fact, made the South refuse union — thereby enshrining slavery as an institution in the South with no opposition.

According to James McPherson, Professor Emeritus of U.S. history at Princeton University, the Founding Fathers did everything they could to abolish slavery gradually. Abraham Lincoln reiterates this point, according to McPherson [5] [6]:

“The founding fathers, said Lincoln, had opposed slavery. They adopted a Declaration of Independence that pronounced all men created equal. They enacted the Northwest Ordinance of 1787 banning slavery from the vast Northwest Territory. To be sure, many of the founders owned slaves. But they asserted their hostility to slavery in principle while tolerating it temporarily (as they hoped) in practice. That was why they did not mention the words “slave” or “slavery” in the Constitution, but referred only to “persons held to service.” “Thus, the thing is hid away, in the constitution,” said Lincoln, “just as an afflicted man hides away a wen or a cancer, which he dares not cut out at once, lest he bleed to death; with the promise, nevertheless, that the cutting may begin at the end of a given time.”

This context also debunks McCarthy’s criticism of Jefferson and factually incorrect statements made by Finkelman. Jefferson himself knew the hard place that the Founding Fathers were in regarding slavery. Thomas G. West, Professor of Politics at Hillsdale College and expert on the Founding, quotes Jefferson with explanation [7]:

“[Jefferson:] ‘Deep rooted prejudices entertained by the whites; ten thousand recollections by the blacks of the injuries they have sustained; new provocations; the real distinctions which nature has made; and many other circumstances, will divide us into parties, and produce convulsions which will probably never end but in the extermination of the one or the other race.’ If Jefferson’s description of the situation were accurate, slavery would have been justified, but only as a necessary evil to be ended as quickly as possible in a way compatible with both justice and self-preservation.”

Finkelman’s attempt at smearing the Founders simply on the basis that they didn’t abolish slavery outright is activism under the guise of academic “scholarship.”

Jefferson was by no means committed to the institution of slavery on the basis of his own views, but Finkelman doesn’t include that context in his quote:

“At the same time, Jefferson enslaved over 600 people. He described Black people as racially inferior. He often sold people to punish them, Finkelman said, and when asked to speak against allowing Missouri to become a slave state, Jefferson refused. He and many other southern Founders were “committed to the institution of slavery,” Finkelman said.”

Rather, Jefferson knew, as well as many other Founding Fathers in the same position, that slavery was a necessary evil for the country so long as they wished to avoid bloodshed. Eventually, the American Founding principles, the natural right to equality of persons, would require a civil war to be fully realized.

In fact, Jefferson included a passage in an earlier draft of the Declaration that condemned slavery as an evil inflicted upon the U.S. colonies by the British [8].

As for Finkelman’s comment about Jefferson refusing to speak out against Missouri, there is a wild lack of context. Finkelman refers to the Missouri Compromise of 1820 that almost pushed the country to the brink of war [9]. Jefferson speaking out would only have made a tense situation worse, and made it less likely that slavery would be abolished peacefully, albeit slowly.

McCarthy’s attempt to “fact check” the claim about the Founding Fathers only forces him to reveal his bias. It is clear that the Founding Fathers’ views on racism can’t be categorically understood as pro-slavery, and yet McCarthy has no problem rating McEnanys’ statement false.

Even the term ‘racism’ and ‘racist’ have been so overused in society that they mean everything and nothing. Racial hatred was once equal to ‘racism’ but under more recent definitions, if it’s racist to believe in free speech, then maybe the Founders were ‘racist’ under those overbroad and sweeping generalizations. If merely existing and not being a militant Marxist on questions of race make one ‘racist’ then every generation is going to be seen as guilty in time.

The founding of America was not solely about race, and the entire story of America is not about race. Modern historians, trash fact-check outlets like Politifact, and Marxists, but I repeat myself, all want it to be so. The founding of America was a beacon of liberty, hope and freedom to the world, and proof that such revolutions could proceed without the kind of needless and massive civilian bloodletting of the French Revolution, the Haitian Revolution, or the eventual American Civil War.

Modern journalists obsess over race to the point of fetishization of the topic. Sometimes a cigar is just a cigar, and sometimes a country is a government, an idea, and a people and not solely the conflict between its people’s subsets.

The American Revolution is an amazing story of the triumph of great men for a great cause: our country, its strong, resilient, religious and proud people, its self-governance, and the protection of certain liberties as fundamental rights. It’s no wonder that Marxists are fixated on constantly tearing it down and smearing the Revolution with their pejoratives. They paint everything with stink to cover their own odor, they sully the American Revolution so no one notices that every left-wing revolution involves terror, repression and totalitarianism.

Attempting to seriously examine a historical and social issue such as the Founding Fathers and slavery should be left to real historians, not PolitiFact writers or biased historians.