Opposition in France is increasing among citizens as well as legislators (see 1, 2). Last week a TV station in France aired a segment about 5G and wireless health risks. Protesters have also stopped 20 trees from being cut down for a 5G antenna.

Forty residents and demonstrators gathered at Saint-Cadou in the town of Sizun ( Finistère ) to block the installation of a 5G antenna belonging to the Telecom company Free, reports Le Télégramme .

Loggers were proceeding to fell about twenty trees in area where the antennas were to be located. But protesters climbed the trees, making the operation too dangerous. Unable to work, the companies mobilized on the site were forced to turn back. Protesters voiced that the antennas were to close to residents and they raised the issue of health and environmental impacts. 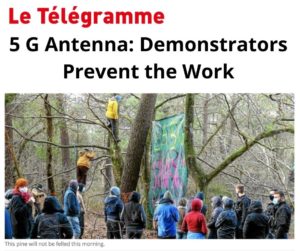 Yahoo News:Protesters block the installation of a 5G antenna for Free

The Kurun association mobilized against 5G

The American Academy of Pediatrics and the California Department of Health recommend children reduce cell phone radiation exposure, as do medical organizations internationally, such as the Vienna Medical Association, Athens Medical Association and International Society of Doctors for Environment.

Over 600 cities in Italy have passed resolutions to halt 5G, as have cities throughout Europe, such as Trafford, United Kingdom, Lille, France, Ormidia, Cyprus, Balchik, Bulgaria. The Pancyprian Medical Association and Cyprus National Committee on the Environment and Child Health sent Parliament their position paper “The Risks to Public Health from the Use of the 5G Network.” Bermuda has halted 5G pending a report on safety. Switzerland’s report on 5G health effects resulted in the Parliament’s refusal to loosen their radiation limits despite heavy industry lobbying efforts. The Netherlands issued a 5G report that recommended measuring radiation levels and also recommended against using the 26 GHz frequency band for 5G “for as long as the potential health risks have not been investigated.”

Get FAQs about 5G here

Since 2018 there have been reports of people and animals experiencing symptoms and illnesses where 5G has been installed (see 1, 2, 3, 4). Of course other sources of wireless emit harmful radiation too. Last year, the World Health Organization warned that high levels of Electromagnetic exposure could lead to health issues in a significant portion of the population.