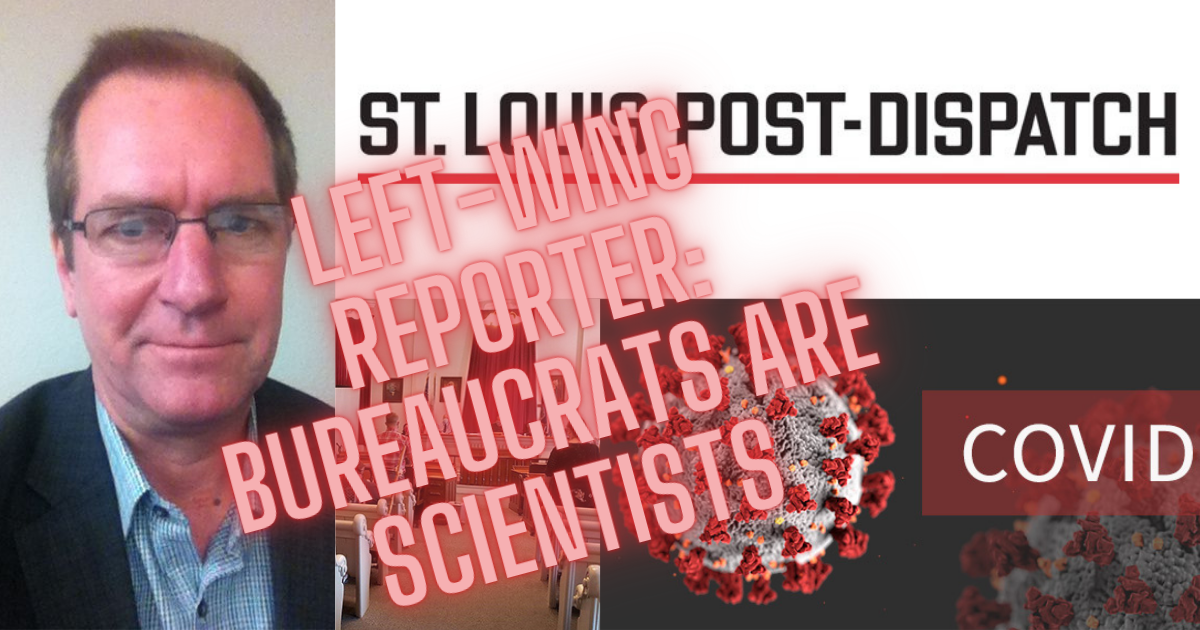 Reporter Kurt Erickson takes a simple story and, in it, reveals quite a bit about the biases and prejudices that color so much of reporting in general and COVID reporting in particular.

No wonder why so many people distrust the media when its practitioners are so shamelessly biased.

The first paragraph of this piece was clouded with prejudice that would color the rest of the article:

“A Missouri judge has stripped local health departments of their ability to issue orders designed to keep people safe during a pandemic.”

The phrase “designed to keep people safe” is both an opinion as to their motives. Here, it is opinion presented as fact. Why were the health orders issued? Some think there is a political motive, some claim that there was a financial motive. The health officials could just be following the social pressure of other bureaucrats and following the herd. The ‘why’ is worthy of its own article, but here the reporter just states it as fact.

This is extremely irresponsible and sloppy reporting, and we’re not even through the lede.

“…Judge Daniel Green said all health orders related to the spread of COVID-19 in the state should be lifted because they violate the state constitution’s separation of powers clause affecting the executive, legislative and judicial branches of government.”

This is a technical legal issue, and it’s not explained for the reader as much as its treated as a pretense. They are copying and pasting the verbatim words from the order, but giving zero clarity or context to the issue. Most readers are not going to understand what the separation of powers clause means in this situation.

It would have been better to have paraphrased the decision to take a complex legal issue and boil it down for the benefit of readers. The court was saying that the proper place for legislation was in the legislature. Letting health officials write laws was a fundamental transformation of our government that needed to be put back in its proper ordering: laws are written by the legislature, carried out by the executive, and disputes about them are handled in the judiciary.

Using a technical, arcane and somewhat esoteric quote does not serve the interests of readers, it mystifies the underlying issues so that only the reporter’s subtle left-wing answers are understandable. It’s as though the reporter puts all of the Judge’s arguments in Greek and presents the dissenting left-wing views in plain English. The reporter is purposefully complicating an issue that deserves clarity and context.

“…challenged whether regulations issued by state health officials unconstitutionally authorized local medical directors to issue rules, such as quarantines and business closures to address concerns about the spread of the deadly disease.”

It beggars belief that reporter Erickson is this stupid, but apparently he is. A disease [1] is not a virus. [2][3] Erickson is misusing a word while arrogantly writing about Republicans who he implies do not understand the virus. One simple way to think about it is that even though viruses lead to diseases, the virus is the agent that is causing the symptoms. The disease is the presented illness.

As well, the COVID disease is far from “deadly” and is, in fact, one of the mildest viruses in recent years. The challenge with COVID is that its transmissibility is very high, meaning that it spreads easily. It’s high transmissibility is most responsible for the human cost of 774,580 dead. [5]

Though many of the COVID fatalities are contested, and controversy exists about whether COVID’s fatality is significantly lower than what is reported due to political motives. [6][7]

“It cites scientific consensus from federal, state and local public health officials that masks are necessary to limit the spread of COVID-19 until more people are vaccinated.”

Politicians and bureaucrats are not capable of creating ‘scientific consensus.’ This is a major misrepresentation.

A spokesman for Attorney General Eric Schmitt, a Republican candidate for U.S. Senate who has gone to court to fight health orders, signaled the case would not be appealed.

Schmitt’s partisan and candidate status isn’t relevant, but included to further a narrative of Republicans-dont-take-COVID-seriously. It’s a form of guilt by association here. It’s meant to provide the reader with “oh, clearly he did this, because he’s running for office and appealing to those evil Republican primary voters.”

There’s no other reason to include it. The Judge in this case, Judge Daniel Green, is also a Republican. [11] He just recently won re-election as a Republican in 2020. [12] He came to this conclusion even though he’s not currently running for re-election, but somehow that escapes mention in the article.

Presuming that bias is unfair to any outlet, but in this case we have 40 years of editorial endorsements for Democrat Presidential candidates by the St. Louis Post-Dispatch, so it’s not really a presumption after a generation of solidly left-wing endorsements. [13]

Brown, who is now running for a seat in the state Senate, said the orders were an example of “tyranny.”

This is a use of “scare quotes” to indicate mocking derision for a quote. It’s a violation of any pretense of objectivity by the reporter. The person mentioned, Ben Brown who owns the bar which sued to undo the regulations, may indeed feel as though the regulations are tyrannical. There’s no need for scare quotes except to signal to the reader that it’s an exaggeration.

Here’s our revision without the scare quotes:

Brown, who is now running for a seat in the state Senate, said the orders were an example of tyranny.

That paraphrasing of his comments exists without the cynicism, snark, and obvious left-wing bias evident in most reporters for legacy corporate media outlets.

Overall this article is filled with partisan sniping, bias, and major mistakes.