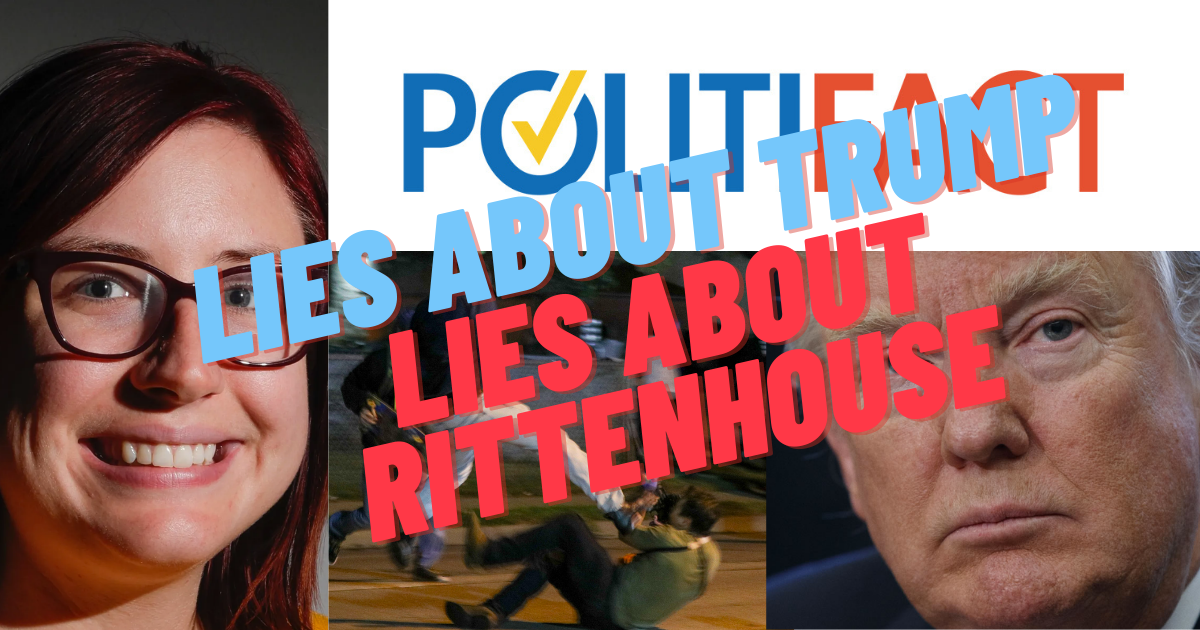 BeMiller rates Trump as ‘false’ and lying because he accurately described the events of August 25, 2020 when Kyle Rittenhouse shot three people, killing two of them, in Kenosha, Wisconsin.

The media quickly took the side of the pro-BLM protesters, and decided to Nicholas Sandmann the defendant Kyle Rittenhouse.

Here’s the main argument by BeMiller as she declares Trump false:

In an Aug. 31, 2020 media briefing, on the eve of his visit to Kenosha, Trump defended Rittenhouse’s actions when asked about the teenager.

“You saw the same tape as I saw,” Trump said. “And he was trying to get away from them, I guess; it looks like. And he fell, and then they very violently attacked him. And it was something that we’re looking at right now and it’s under investigation.”

The president correctly describes some minor details about that night. But overall, his comments grossly mischaracterize what happened — leaving out that by the time of the events he described, prosecutors say Rittenhouse had already shot and killed a man.

So her point seems to be that President Trump wasn’t wrong about what he said per se, but because he left out the fact Rittenhouse had shot Joseph Rosenbaum earlier, it is missing context.

There are really only three factual claims made by Trump here:

1] “he was trying to get away from them, I guess; it looks like.”
2] “And he fell, and then they very violently attacked him.”
3] “he probably would have been killed.”

These are the three things claimed by Trump. Politifact rates this statement as ‘false’ and Trump painting a “false picture” because it doesn’t reference the death of Rosenbaum. But Rosenbaum’s death isn’t relevant to the accuracy of what is being said. It doesn’t change the nature of the video or the question of Rittenhouse’s guilt or innocence.

As you can probably notice, it really depends on what Trump meant by “them” and at what point in the night Trump was referencing Rittenhouse’s flight from the BLM riot mob.

Rittenhouse was first accosted by the mob when he tried putting out dumpster fires with fire extinguishers. [1]

As seen in video from the event, he is then chased by a crowd that includes Rosenbaum. Rosenbaum then confronts Rittenhouse off-camera, grabs the barrel of the gun, and tells Rittenhouse he’s going to kill him. The fatal shot for Rosenbaum, a violent felon, is off-camera and not seen.

The riot mob then continues to chase Rittenhouse down the street. Rittenhouse falls, is violently attacked, and responds to his attackers by shooting two of them. It’s clear that when Gaige Grosskreutz approaches Rittenhouse, he is intending to kill him as he has his handgun out and is posing as a peaceful paramedic even though his obviously coached trial statements said otherwise. [2] Grosskreutz filed a $20 million lawsuit against the City of Kenosha because, he says, they let ‘roving bands of militia’ run around. [3] So Grosskreutz had a strong financial incentive not to tell the whole truth during the trial.

If Trump meant that Rittenhouse was ‘trying to get away from them’ when they were at the dumpster fires, then you could argue that the intervening murder of Rosenbaum was relevant.

But if Trump meant that Rittenhouse was ‘trying to get away from them’ when he was being chased by the mob after shooting Rosenbaum, then it’s less relevant because the motives of the crowd in seeking to kill Rittenhouse aren’t as relevant or important to the story as are the actions by Rittenhouse.

The clearest video that was available right away were the shots involving Anthony Huber and Gaige Grosskruetz. The shooting of Rosenbaum, earlier, was on grainy video and the fatal shot was not captured. It’s very reasonable for Trump to have been making his statements based on the shootings of Huber and Grosskruetz.

So what BeMiller is doing is assuming bad faith in her statement. She’s ignoring other reasonable interpretations in order to project a bad motive upon Trump. This is a misrepresentation of the source material.

This kind of chronic misrepresentation was also evident in the background given for the underlying protests. According to the mainstream media, it was because some poor soul got shot seven times.

Here’s what BeMiller said of the underlying cause of the riots: the police shooting of Jacob Blake.

Jacob Blake, 29, was shot in the back seven times at close range by Officer Rusten Sheskey on Aug. 23, 2020 as he walked away from officers and tried to get into an SUV with three of his children inside. The shooting left him paralyzed from the waist down, according to his family.

What BeMiller and Politifact leaves out, is that Blake was accused of sexual assault of a sleeping woman, his ex-girlfriend, who was in bed with one of her young children at the time of the assault. [4] Police filed charges against him for felony sexual assault. Part of the proceedings was a restraining order telling Blake not to return to the residence of his ex-girlfriend. Blake was wanted for failing to appear in court related to those charges. [5]

Police were called to a 911 call of a man brandishing a knife in violation of a restraining order, they recognized Blake and went to arrest him for his outstanding warrants. [6][7]

Blake was at the residence of his sexual assault accuser, a location he was specififally ordered  not to go pursuant to the restraining order. [8]

Blake was brandishing a knife when police officers showed up, [9][10] and declared he was going to his car to get a gun. When he reached into his car he was shot by police. Blake later admitted he was holding a knife when the police showed up. [11] The media was trying hard to cover up the fact that Blake was armed. [12]

As you can see, there is major missing context to the Jacob Blake part of this story. That kind of chronic media malpractice is what led to the protests in Kenosha in the first place, because by making Blake’s crime seem as though it was merely his skin color, many low-information liberals emotionally thought that they needed to protest and create chaos to get political attention.

The selective reporting on Jacob Blake is so egregious as to constitute lying about the topic. Portraying Blake as a victim is a stunning mischaracterization.

That’s hardly the last major mischaracterization in the piece as well. BeMiller refers to these individuals as “protesters” seven times and never ‘rioters’ or ‘arsonists’ or a violent mob. She only uses the word “violence” and its variations four times, each time referencing Trump’s usage of the word in his quote. So Politifact gives the impression that the left-wing mob burning down Kenosha businesses were peacefully holding signs and singing Buffalo Springfield songs.

Yet these were people burning down businesses and rioting through a city where the police were overwhelmed and cowardly hiding blocks away. The police claim that this was not an official ‘stand down’ order, but they were certainly nowhere in sight policing the town that night.

Gaige Grosskruetz was wearing a vest labelled “paramedic” and was illegally carrying a handgun. [13] Grosskruetz told NPR he attends BLM rallies and protests regularly as a ‘paramedic’ and as a ‘legal observer.’ [14]

Arguably Joseph “shoot me n*****” Rosenbaum [16] was a protester, and Anthony Huber may arguably have been a ‘protester’ but Grosskruetz is certainly not. He was an armed snake posing as something he was not. He was not even posing as a protester.

Let’s read their conclusory paragraphs and decide if that’s true:

Trump said a video shows Rittenhouse “was trying to get away from” protesters”  and “fell, and then they violently attacked him.”

Rittenhouse did fall as a crowd followed him, but Trump’s comments leave an incendiary and false picture: By the time he fell, according to criminal charges, Rittenhouse had already shot and killed one person that night.

We rate the claim False.

Trump’s statement is entirely correct. Rosenbaum’s death earlier in the evening is irrelevant to the truth that Trump spoke. Trump was not leaving out any relevant context to his statement or to the recitation of basic facts about the Rittenhouse case.