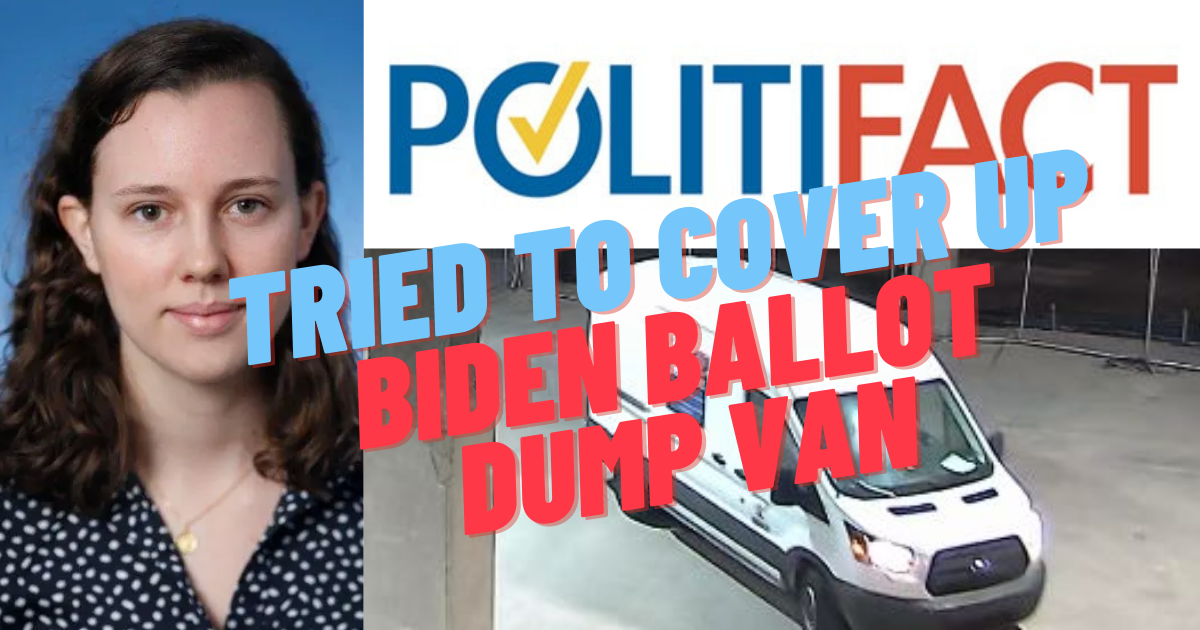 The funders they list and publicly report are predominantly a list of left-wing foundations.[3] Multiple ‘anonymous’ donations are listed at every level. These unreported funders create a serious financial conflict of interest for Hendrickson. Her funding comes from donors who put into doubt the quality of her reporting. If she were to report the truth about voter fraud, would she lose her funding? Is she being funded by Dominion Voting Systems or by allies of Democrat Governor Gretchen Whitmer?

Reviewing her recent work [4], you can immediately notice that her tone and perspective is obviously one of a Democrat operative. Every story is approached from a default left-wing position. The Republicans are the ‘other’ and her stories are consistently supposedly ‘debunking’ claims about voter fraud. This shows she is fundamentally not objective. When a reporter’s cumulative output is only favorable to one partisan position, it shows their inability to be objective. Look at this story for an insight into Hendrickson, covering the leak of the Roe v. Wade leaked draft opinion [5], where she interviews politicians for their reaction. She interviews 7 Democrats and 3 Republicans. 6/7 of the Democrats interviewed were women, and only 1/3 Republicans interviewed were women. It’s a cute way to reinforce the false left-wing meme that women are pro-abortion and old men are pro-life. [6]

Detroit has a history in Michigan politics of having very suspicious election returns.

Even though winning a ‘write-in’ campaign is virtually unheard of, Detroit Mayor Mike Duggan won one in 2013 despite being kicked off the ballot previously. [7]

In 2016, journalist James O’Keefe requested Detroit ballots in the name of Mayor Duggan, Eminem, among others, and was always offered a live ballot, demonstrating the need, O’Keefe said, for a Voter Identification law that would require prospective voters to show identification proving who they are before being handed a ballot. [8]

In 2017, Garlin Gilchrist was ahead on election day with in-person voting, then a surge of late-night absentees [9] delivered via a white van to the TCF Center gave the victory to incumbent Detroit Clerk Janice Winfrey. Gilchrist requested a recount and called the situation a “catastrophe.”  [10]

This is the data stream that provided the interesting graphs from the night of the election, showing the vote totals between Trump and Biden over time.

In all of these charts it’s hard not to notice the large late-night leap for Joe Biden.

What’s even harder to explain is how it happened so late in the night considering that most counties had already reported their full totals for election night.

The most charitable explanation is that those votes came from counties, like Wayne County, that are known for being reliably Democrat, where the votes are often 90% in favor of Democrats. But why would those votes be the ones that come in late?

He and other witnesses have consistently and reliably said the same thing: they saw a van arrive at 3:30AM in the underground ramp at the TCF Center in Detroit.

If Clara Hendrickson had spoken with any Republicans who were present, they would have told her the same thing they told us: the van arrived at 3:30AM.

So what does Hendrickson do? She ‘fact-checks’ the claim that a van arrived in the middle of the night with ballots, but identifies the wrong van.

She does zero actual investigation, she takes an article published by the Texas Scorecard that arrived around 2:40AM, and finds a single colleague in the media who says it’s camera equipment, and then rates the entire claim about late-night ballot vans false.

Let’s look at the sophistry she deployed to do this little hat trick:

“No evidence ballots were smuggled into Detroit counting hub”

This is objectively false because there were a wide variety of eyewitnesses who saw ballots being smuggled into the TCF Center.

It’s also objectively false because there was video of the 3:30AM Biden Ballot Dump that Hendrickson was too lazy and negligent to procure.

So, there’s not just ‘no evidence’ there’s now incontrovertible evidence.

In fact, there’s so much evidence that Detroit was forced to change its explanation. Instead of denying that such a van existed, now they admit there were late night absentee ballots delivered at 3:30AM.

Meaning that, Detroit takes a more honest position than Politifact because they now admit that ballots were brought into Detroit late at night.

But what is truly most hilarious about all of this is that even Clara Hendrickson now admits that there were late night deliveries of ballots to the TCF Center.[18]

Hendrickson’s original article debunked a van delivering ballots, and she will likely now claim she didn’t mean the 3:30AM Biden Ballot Dump. But she doesn’t clarify that in the original article, and it’s obvious by the timeline that she never admitted to it until it was proven by the Gateway Pundit.

The narrative only moves the goalposts once the old narrative is exposed as false.

If Hendrickson ever reported the truth, her paymasters at Report for America would probably pull her paycheck, so it’s clear why she can’t be honest, thorough, objective, balanced, or write stories in good faith.