Politico Devotes Itself to Convincing Audience Biden is Catholic Despite Evidence 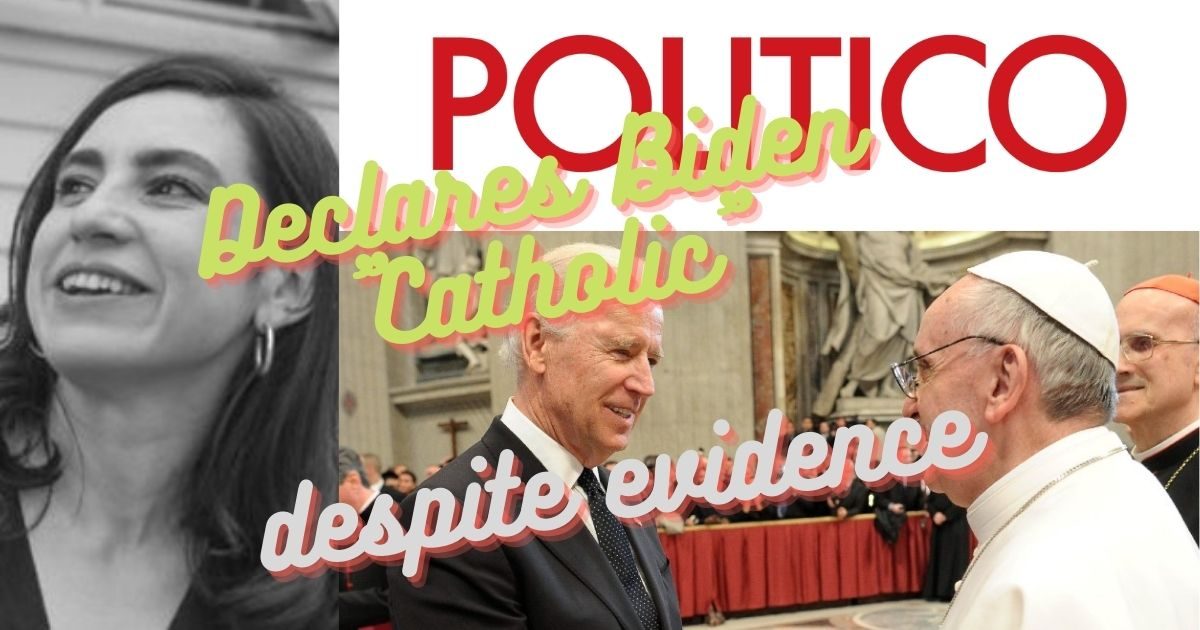 Cramer acts more as a campaign publicity agent than a reporter — echoing old lines and moments in which Biden has been “authentically” Catholic. Biden’s Catholic identity, however, has become less and less believable as many Catholics see his public support for abortion and gay marriage intolerable per Catholic social teaching.

Cramer uses a headline implicit within it a lie — that adhering to the teachings of the Catholic Church makes you a “conservative Catholic.”

“‘A Private Matter’: Joe Biden’s Very Public Clash With His Own Church:

Becoming president has brought Biden into direct conflict with conservative Catholics on the most polarizing issue of the moment: Abortion.”

Paragraph 2271 of the Catholic Catechism states [1]:

“Since the first century the Church has affirmed the moral evil of every procured abortion. This teaching has not changed and remains unchangeable. Direct abortion, that is to say, abortion willed either as an end or a means, is gravely contrary to the moral law: You shall not kill the embryo by abortion and shall not cause the newborn to perish.[75] God, the Lord of life, has entrusted to men the noble mission of safeguarding life, and men must carry it out in a manner worthy of themselves. Life must be protected with the utmost care from the moment of conception: abortion and infanticide are abominable crimes.[76]”

Did Cramer even bother to look at the Catechism? There’s no mention of it anywhere in the article, especially concerning the matter of abortion. If she had, calling Catholics “conservative” who protect life by opposing abortion both publicly and privately is a misnomer. They are simply Catholics.

Biden has come into conflict with Catholics. That’s the accurate headline.

Cramer promotes Biden’s Catholicism in the way his campaign and staffers have done so since the beginning — promote the aesthetic points while ignoring his public and willful attempts to counteract Catholic dogma.

“He is a president who built his life in politics around the idea of faith, not in some vague way, but in a specifically Catholic way. When he explains himself to the world, it is through Catholic social doctrine and the Catholic institutions he loved: the nuns, the schools, the culture. And yet he has arrived in the White House to discover that he is viewed suspiciously not by non-Catholics for being too Catholic, but rather by members of his own faith for not being Catholic enough. It was his position on abortion — and his decision in the Democratic primary to finally oppose the Hyde Amendment, the measure banning public funding for most abortions, the one thing he resisted for decades — that helped him win the White House after three decades and three presidential campaigns, but immediately made him a target of his own church.”

But is Biden really all that Catholic? Aside from aesthetically promoting it? What’s missing in this feature is a comprehensive look into the issue.

According to Breitbart, Biden nominated Xavier Becerra to lead the Department of Health and Human services [2].

Becerra has a documented history in promoting extreme measures regarding abortion [3]:

“Becerra is currently California’s attorney general. During his tenure, he has upheld state pro-abortion laws that forced crisis pregnancy centers to advertise for abortions, and required Catholic nuns to have abortion coverage in their health plans. He has also pushed for easier access to the abortion pill regimen and supported lawsuits against abortion restrictions in other states.”

Biden has also said that he plans to overturn the Supreme Court ruling that allowed organizations like the Little Sisters of the Poor to not pay for employees’ birth control [4].

Biden has presided over a gay wedding, which the Catholic church condemns [5].

“Homosexual persons are called to chastity. By the virtues of self-mastery that teach them inner freedom, at times by the support of disinterested friendship, by prayer and sacramental grace, they can and should gradually and resolutely approach Christian perfection.”

Biden has also publicly said there are at least three genders, which the Catholic Church expressly denies [7]:

“​​The most recent Vatican statement on gender ideology categorically rejects Biden’s claim about three genders…Titled “Male and Female He Created Them: Towards a Path of Dialogue on the Question of Gender Theory in Education,” the document states that identifying beyond man or woman is “nothing more than a confused concept of freedom in the realm of feelings and wants.”

Cramer also dishonestly frames the story by pointing out Biden’s public displays of his Catholic identity. However, this is a sly tactic that wouldn’t work on a Catholic.

Cramer wants us to focus on the superficial aspects because that’s where Biden seems the most “Catholic”:

“And yet the president’s faith is one of the most public things about him. You can read it on his body: the way he turns his eyes upward, or crosses himself, or fingers the rosary around his left wrist, his late son Beau’s, the one he wore before he died.”

Being a devout Catholic takes more than carrying a rosary with you. A priest interviewed notes this and another crucial point Cramer misses [8]:

“The reason for the harsh assessment of Biden’s record is the dichotomy between his outward show of piety on the one hand and his record of supporting evil on the other, Pokorsky notes, adding that ‘Biden’s habitual and unapologetic sinful acts are on full display.’…’The next Republican that tells me I’m not religious I’m going to shove my rosary beads down their throat,’ Biden said in 2005, and yet being a faithful Catholic means much more than carrying a rosary, the priest declares.”

Cramer can only report superficially on Biden’s Catholic identity because that seems to be all the reporting she has really done. The reporter should look with a truly critical eye, not simply add a few ouvertures to his critics and then report as if she were a staffer spinning the story to Biden’s benefit.

She writes about Biden’s commitment to staying in the Catholic Church as though Biden is somehow courageous for publicly promoting policies that explicitly reject the teachings of the Church:

“It is easy to imagine a time when Joe Biden could only hear so much of this before snapping…He could be all God love ya, man one second, and dead-serious and defiant the next. ‘This is my church as much as it is the church of a cardinal, bishop, or janitor,” he told the Christian Science Monitor during his 2008 run for president, “and I’m not going anywhere.’”

A little look into Scripture could also explain this kind of behavior [8]:

“The words of Jesus are foreboding: ‘Not everyone who says to me, ‘Lord, Lord,’ shall enter the kingdom of heaven, but he who does the will of my Father who is in heaven,’ Pokorsky cites.”

More importantly, proclaiming oneself as a devout Catholic on the campaign trail is perhaps more egregious [8]:

“It is ‘presumptuous and dangerous to proclaim oneself as a devout Catholic or to encourage (or even allow) the description,’ the priest states.”

Yet Cramer encourages that description at every available opportunity.

Cramer reveals the superficial investigation by portraying each conflict from the point of someone who doesn’t know much about Catholic teaching.

“The move [to deny Biden communion] surprised many bishops who are wary of “weaponizing” the Eucharist at a time when fewer and fewer practicing Catholics believe in the church’s most fundamental teaching. The “great mystery of the Eucharist,” where the bread and wine at mass is transformed into the body and blood of Christ, is not just a personal moment before God, the “Sunday obligation” — it has kept Catholics coming back to the church, even amid a protracted sexual-abuse crisis that has eroded the moral authority of its leadership.”

Firstly, “many bishops” is a factual inaccuracy. The only bishop who used the word “weaponize” was Bishop McElroy. [9]

Second, refusing the Eucharist is a practice of the Church explicitly laid out in canon law in situations like this [10]:

“All those publicly unworthy are to be barred from the Eucharist, such as excommunicates, those interdicted, and those manifestly infamous, unless their penitence and emendation are shown and they have satisfied beforehand the public scandal [they caused]”

Biden has demonstrated a factual and lengthy list of creating scandal by promoting doctrines that reject the teachings of the Catholic Church. Cramer, however, sees “creating scandal” as “personal struggle.”

Her bias is perhaps the most clear when she makes a specious claim comparing Trump and Biden’s faith:

“It was more than a little galling to many Democrats to see their manifestly faithful candidate receive a public rebuke in an election to defeat Donald Trump.”

The facts show that Biden is not a manifestly faithful candidate, as he has shown demonstrable support for anti-Catholic legislation and policy.

The factual truth is that Trump, regardless of his personal choices, has promoted Catholic legislation when Biden has not [11]:

“Trump reinstated the Mexico City policy, also known as the global gag rule, which was first put in place by President Ronald Reagan in 1984. It prohibits U.S. funding to international nongovernmental organizations that offer or advise on a wide range of family planning and reproductive health options if they include abortion ― even if U.S. dollars are not specifically used for abortion-related services.”

Cramer even notes this when she discusses Trump’s anti-abortion policies. Trump has also publicly spoken out against violence against the Catholic Church when Biden has remained silent [12]:

“The Trump campaign also condemned the onslaught of anti-Catholic crimes occurring throughout the United States in a July 17 statement to the DCNF, accusing ‘radical leftists’ of attempting to destroy the ‘moral fabric of our nation.’…Biden has not responded to a number of requests for comment from the DCNF on the alleged anti-Catholic crimes.”

Cramer has shown herself to be a biased reporter insofar as Biden’s Catholic identity is promoted, while his conflicts with the Church underplayed as conflicts in which Biden is either innocent or victimized. This is the opposite of the truth.

Trying to determine who is actually a member of a congregation is difficult because determining what people actually believe is difficult. But the Catholic Church specifically outlines its dogmas, and lays out what one has to believe in order to be a faithful member of their congregation. Biden fails on this account repeatedly, and so the Catholic faith provides a clear answer that Politico wants to conspicuously avoid.