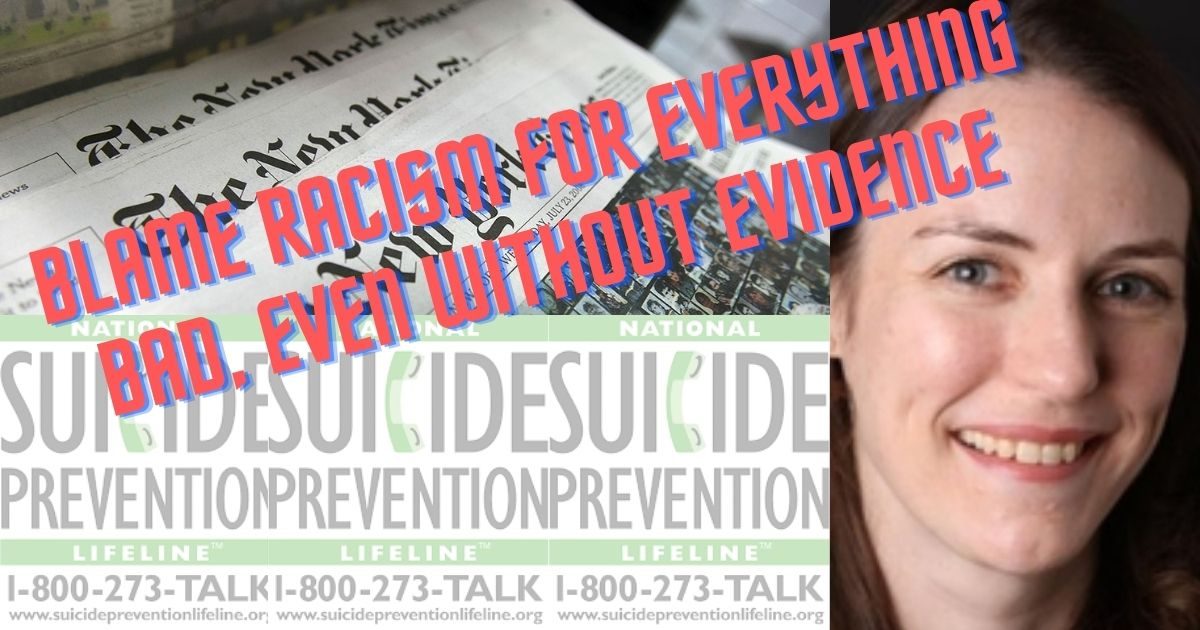 In this NYT article, Caron reports on a study that showed suicide rates among black youth, rose between 2003 and 2017. Rather than focus on the study itself, Caron uses it as a segue to scapegoat racists rather than do real reporting. Instead of finding facts in this article, we find a number of biased sources who claim racism and black marginalization are factors in suicide rates, despite the actual study omitting a discussion of this aspect. Ethical journalists investigate the factual claims that their sources make in stories. Instead, Caron cites her sources’ opinions as facts, makes premature conclusions, and oversimplifies the issue.

Rather than conducting a real investigation, Caron ignores the factual side of the claims in her story and allows them to stand with no evidence to support them. Without evidence, her quotes are simply hearsay and should not be published. Caron quotes:

“I think in the past suicide — or suicidal behavior — was just thought of as a white thing,” said Dr. Sheftall, a principal investigator at the Center for Suicide Prevention and Research at the Abigail Wexner Research Institute at Nationwide Children’s Hospital in Columbus, Ohio. “And that’s not the case.”

As a reporter, Caron has a responsibility to look into this matter if she’s going to publish a quote that does not provide its own evidence. Sheftall’s comment — that suicide is thought of as a “white thing” is a factual claim that can be investigated by the reporter. Unfortunately, Caron conducts a superficial investigation and allows Sheftall to spin the story.

I can add some useful facts that might explain what Sheftall is getting at. According to the American Foundation for Suicide Prevention, “White males accounted for 69.38% of suicide deaths in 2019” and the rate of suicide is highest for middle-aged men [1]. So, it makes sense that many focus on the group that makes up most of the suicide deaths in the country.

Caron wants the reader to see what she does when she publishes this quote: black suffering is, yet again, ignored in the face of white suffering. If Sheftall wants suicide to become a “black thing” that unfortunately means they need to overtake whites in this statistic. Unfortunate conclusions that Caron does not look into for obvious reasons.

Caron responded to this claim in an email, saying:

“When Dr. Sheftall said suicide has often been considered a “white thing,” she’s referring to the tendency for people to think of suicide as something that simply doesn’t happen within the Black community when in fact the data shows that an increasing number of Black kids are dying by suicide.”

Where is the evidence that people think suicide doesn’t happen in the black community?

The second issue in the article is that Caron assumes certain limitations about the study based upon the opinion of another source. The source’s opinion is taken as fact. As a result, Caron laments:

“A limitation of the study was that one of the data sets contained only 35 states and did not include information on potential risk factors like poverty, exposure to trauma, difficulties accessing mental health care, or L.G.B.T.Q. status and experiences with racism.”

LGBTQ status and experiences with racism are obligatory explanations that Caron includes because it’s politically savvy — normal explanations such as poverty and broken families don’t cut it anymore. It is premature to conclude that racism or LGBTQ status plays a part in the rise in suicide rates. This is instead an a priori assumption that Caron and her sources make.

This doesn’t stop Caron from quoting a psychologist who has already decided these things for himself — and then broadcasts his opinion as fact:

“The experiences of the African American child are like none other in the United States,” said LaVome Robinson, a clinical psychologist and professor of psychology at DePaul University in Chicago who has studied suicidality in Black adolescents. “We live in a society that marginalizes us — more so probably than any other group — and has historically for years.”

Are these claims not worthy of being checked by Caron? To assume that marginalization plays a role in black suicide rates is not something the study discussed. Why does Caron continue as if it should with no other reason than the assumption that racism has to play some role. Caron is scapegoating imaginary racists on the basis of one psychologist.

What’s going on here is also a form of cherry-picking: where the reporter takes a study that refrains from making wild conclusions, and then just finds a source willing to say whatever conclusion they want the study to say. This isn’t journalism, it’s shameless ideological advocacy.

Finally, if marginalization is an a priori factor for increased suicide rates, why do other minorities escape this fate?

And yet, the NYT continues to remind us that anti-Asian hatred and racism is alive and well in the United States. According to one NYT source [3]:

“…discrimination has tended to peak in times of national crisis, Lok Siu, an associate professor of Asian-American and Asian diaspora studies at the University of California, Berkeley, told me. In the early 20th century, there was, she said, “a chain of exclusion acts,” meant to keep Asians from immigrating to the United States. During World War II, Japanese Americans were incarcerated in internment camps. During the Cold War, Chinese American organizations were targeted. After the Sept. 11 terrorist attacks, there was a rise in violence against Asian Muslims and Sikhs. Now, of course, we’re living through a catastrophic pandemic and anti-Asian violence is rising again, experts have said.”

So why would black suicide rates be rising due to racism, but Asian suicide rates low despite the same kind of marginalization? Something Caron might have asked her sources but failed to do.

Thirdly, Caron publishes an extremely tendentious definition of suicide that is an oversimplification of the issue and thus patently false.

Caron writes of a source:

“In the Black community, suicide as we typically define it remains rare, Dr. Robinson added, but the numbers may be higher than we think because of indirect suicide, she said, where adolescents deliberately put themselves in harm’s way…’The question you should ask is, ‘Why is it that their will to live was so weak, or not strong enough, to prohibit them from engaging in those very risky behaviors that could in fact be deadly?’ Dr. Robinson said.”

This is a gross simplification of what constitutes as “suicide.” According to the National Institute of Mental Health suicide is “defined as death caused by self-directed injurious behavior with intent to die as a result of the behavior” [4].

Whenever leftists redefine words from their common interpretation, you can be assured they are out to advance a base ideological agenda.

Here, ‘suicide’ is being redefined as ‘bad decisions’ and ‘risky behaviors’ – this is trash journalism.

It is a far cry from Robinson’s definition.

If we used Robinson’s definition, choosing to sell drugs is “indirect suicide” or carrying an illegal weapon is “indirect suicide.” This is most obviously a false definition, but Caron lets it slide anyway. Letting Robinson define suicide thus allows Caron to imply that black crime is also a form of suicide which is partially caused by racism. Thus, racism causes black crime. If this is Caron’s contention, so be it, but she should say so.

Finally, Caron quotes another source whose double standards are appalling — and lack evidence.

Caron first accepts the premature conclusion that racism is one of the causes of suicide in black youth. Second, she goes all in on tribal pride:

“Certain protective factors, like positive messaging and a sense of pride about one’s racial and ethnic group, can reduce the effects of racism on mental health, said Kate Keenan, a clinical psychologist at the University of Chicago whose research includes racial disparities in health…’If experiences with racism and discrimination are increasing at a faster rate than we are increasing protective factors, then that might be related to the reported increase in suicidality among Black youth,’ she said”

Again, where is the evidence? These are all leftist talking points, but do they truly explain why the black youth is becoming more suicidal?

If racial pride can reduce the effects of racism on mental health, should white people who are victims of racism increase their racial pride? As mentioned earlier, “White males accounted for 69.38% of suicide deaths in 2019” and the rate of suicide is highest for middle-aged men [5]. Should men then become more proud to be men and white? Something tells me Keenan and Caron would say no.

The major errors in this fact check are a startling lack of evidence made worse by a surprising amount of biased and unchecked sources. The abuse of statistics and studies is also pretty dramatic.

We asked Reporter Caron for comment on this story, and she was kind enough to reply. The most important part of her reply was:

So the question is why?

None of the sources in the piece are claiming to have the answer. In the piece it says: “Why is this happening? There are no definitive answers.” But the sources quoted have all studied health disparities for many years so they offer some ideas.

While her explanation is a bit more modest in tone than her article, it is also not in concordance with her article. The only doubt presented in the article is in the 7th paragraph, as Caron quoted, ‘there are no definitive answers.’

Yet the article suggests and implies that the answer is due to gender discrimination and racism without evidence. The article is not merely about the unexplained rise in black suicide, it is very much presenting an explanation despite what Caron says over email. It’s dishonest to say that a New York Times article is just “offer[ing] some ideas” when, instead, it will be taken as gospel by most in the establishment media.