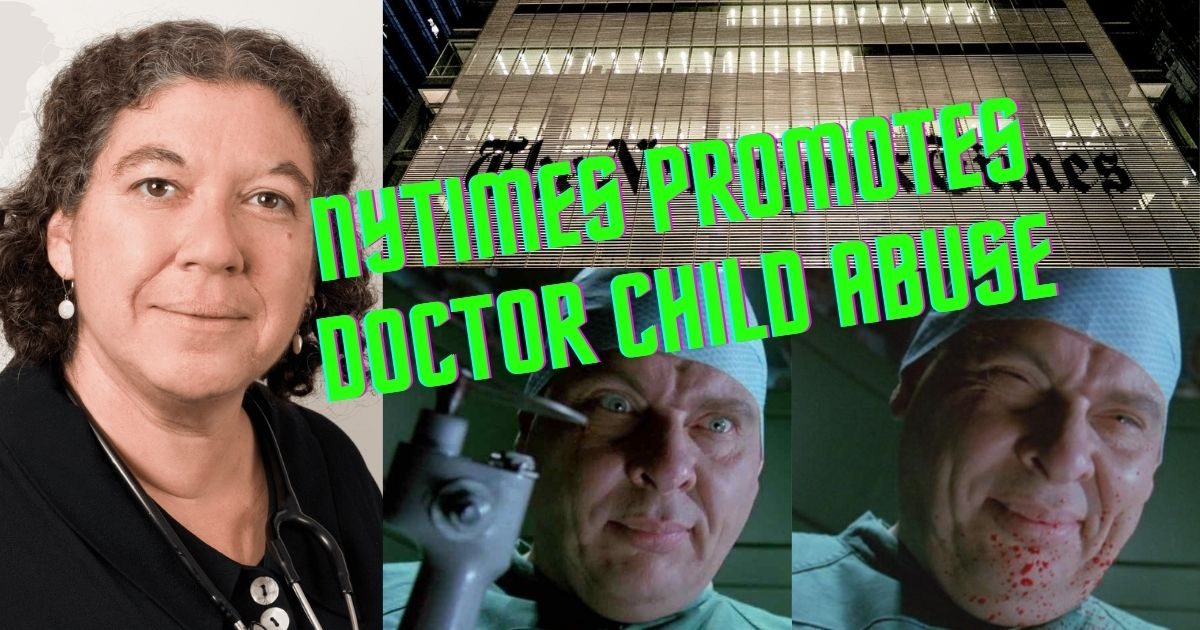 In another piece of propaganda from the NYT, social, moral, and factual consequences are ignored in favor of affirming any and all sexual desires a developing youth has. Rather than present the factual reality — that these methods are experimental and lack scientific evidence — Perri Klass acts as though the science is all in favor of pushing sexual identities on children on the basis of passing feelings or desires.

Klass opens with advice to parents and children to think of the primary care visit as “a place to talk about every aspect of the child’s changing body and mind.”

This has never been the traditional role of the pediatrician, but Klass assumes the role of moral, religious and physical guide in the formation of children.

Klass’s first error is to deceive readers into thinking that LGBTQ friendly doctors are only ‘affirming’ the child’s identity. This is why her first warning is to “be wary of comments that gender kids unnecessarily — are they giving a boy a He-Man sticker or letting him choose?”

And yet, the evidence suggests that should pediatricians act as Klass advises, they would only confuse and seriously harm minors by locking them into a certain sexual orientation that would have passed as quickly as it came. Klass writes:

“When she’s talking to patients in the general pediatric clinic, Dr. Hassouri said, she starts by asking, “Do you feel comfortable in your body, how do you identify, what are the gender or genders of the people you are attracted to, rather than ‘Are you gay, straight or bisexual?’”

To Klass, these questions are only meant to help the child in questioning their gender identity. Questions and doubts only mean kids should be counseled into choosing a gender other than their biological reality. A child may have natural questions, their hormones and natural development may cause anxiety and doubts, but to extremists like Klass, that’s an opening and an opportunity to push this radical biological/political extremism.

Tying momentary attractions to identity is an opinion based upon an ideology. This is not a scientifically proven way of ensuring the child’s health and well being. Rather, it is the doctor pushing a homosexual or transgender identity on a child who may be experiencing perfectly normal feelings at that age. According to a comprehensive study from the New Atlantis [1] [2]:

“…Diamond calls into question the utility of the concept of sexual orientation, especially as it applies to females. She points out that if the neural basis of parent-child attachment — including attachment to one’s mother — forms at least part of the basis for romantic attachments in adulthood, then it would not be surprising for a woman to experience romantic feelings for another woman without necessarily wanting to be sexually intimate with her. Diamond’s research indicates that these kinds of relationships form more often than we typically recognize, especially among women.”

However, Klass has a one-size fits all approach. Listen to the child and whatever they say is taken at face value. This leaves too much discretion to the medical provider to let their ideology overpower the actual medical diagnostics. This is an unscientific and immoral approach to handle a child or teen who has not fully matured sexually, physically, or mentally.

This reveals the opinion that Klass presents as fact: sexual orientation is so expansive that any and all feelings must be affirmed and tied to the child’s identity. This is not a factual claim and there is no evidence to support it. From the New Atlantis Study [3]:

“…we have criticized the common assumption that sexual desires, attractions, or longings reveal some innate and fixed feature of our biological or psychological constitution, a fixed sexual identity or orientation. Furthermore, we may have some reasons to doubt the common assumption that in order to live happy and flourishing lives, we must somehow discover this innate fact about ourselves that we call sexuality or sexual orientation, and invariably express it through particular patterns of sexual behavior or a particular life trajectory. Perhaps we ought instead to consider what sorts of behaviors — whether in the sexual realm or elsewhere — tend to be conducive to health and flourishing, and what kinds of behaviors tend to undermine a healthy and flourishing life.”

Klass leaves out a vital part of the role a physician could play in preventing sexual abuse. According to a 2011 meta-analysis of 37 studies, non-heterosexuals are on average 2.9 times more likely to report having been abused as children. If the pediatrician were not an ideologue, he would determine first that the child reporting homosexual tendencies or desires was not also being abused. [4]

Klass proceeds despite warnings that science and sociology cannot dictate how one should proceed in relation to sexuality. Klass is being disingenuous when she pretends that her moral, social, and political views are subordinated to hard facts. Her moral view is that sexuality and gender is fluid such that every stage and change should be affirmed:

“Dr. Hassouri said that when parents are talking to their own child, her advice is to ‘really listen to your child and believe what they’re telling you and support them, no matter what stage they are in their gender journey, in their sexuality journey.’ And make sure the child is seeing a doctor who will also listen and support them at every stage.”

This is not a widely held view among pediatricians as there is evidence to the contrary that a child’s “sexuality journey” should be constantly affirmed [5] [6]:

“There is little evidence that the phenomenon of transgender identity has a biological basis. There is also little evidence that gender identity issues have a high rate of persistence in children. According to the DSM-5, “In natal [biological] males, persistence [of gender dysphoria] has ranged from 2.2% to 30%. In natal females, persistence has ranged from 12% to 50%.” Scientific data on persistence of gender dysphoria remains sparse due to the very low prevalence of the disorder in the general population, but the wide range of findings in the literature suggests that there is still much that we do not know about why gender dysphoria persists or desists in children. As the DSM-5 entry goes on to note, “It is unclear if children ‘encouraged’ or supported to live socially in the desired gender will show higher rates of persistence, since such children have not yet been followed longitudinally in a systematic manner. There is a clear need for more research in these areas, and for parents and therapists to acknowledge the great uncertainty regarding how to interpret the behavior of these children.”

Klass does not acknowledge the uncertainties regarding these kinds of issues with children. Instead, she pushes propaganda based upon her own beliefs, not facts.

According to the New Atlantis study, therapy and medical care can also attempt the opposite approach Klass takes, with successful results [7]:

“Therapeutic interventions for children must take into account the probability that the children may outgrow cross-gender identification. University of Toronto researcher and therapist Kenneth Zucker believes that family and peer dynamics can play a significant role in the development and persistence of gender-nonconforming behavior, writing that

‘it is important to consider both predisposing and perpetuating factors that might inform a clinical formulation and the development of a therapeutic plan: the role of temperament, parental reinforcement of cross-gender behavior during the sensitive period of gender identity formation, family dynamics, parental psychopathology, peer relationships and the multiple meanings that might underlie the child’s fantasy of becoming a member of the opposite sex.’”

The study goes on to write that Zucker offered treatment to help children embrace the gender they were born with [8]:

“In a follow-up study by Zucker and colleagues of children treated by them over the course of thirty years at the Center for Mental Health and Addiction in Toronto, they found that gender identity disorder persisted in only 3 of the 25 girls they had treated.”

Klass does not offer an objective presentation of the options available to parents with children who experience gender dysphoria or same sex attractions. Rather, she superficially investigates the options so as to present one and only one way of viewing gender and sexuality in children and teenagers.

Rather than present a full picture, Klass only offers us one, very controversial, way of dealing with “transgender” children:

“Dr. Sherer cares for many families with transgender and gender-diverse children, some who have been in her practice since early childhood, and others who find her because she speaks and writes about this population. “I hear being transgender being talked about like it’s a disorder,” she said. “My transgender kids are some of the kindest, bravest kids I have.” She tries to model for parents how to help and support their children, while also handling their own emotions, which can be complex, she said: “There’s obviously a loss to the parent but it’s not a loss of their child — it’s a loss of who they thought the child was.”

This paragraph carries a lot of falsity. First, transgenderism has historically been considered a mental illness until very recently. Dr. Paul R. McHugh, the former psychiatrist-in-chief for Johns Hopkins Hospital, who also participated in the first sex change operations in the U.S., has come to that conclusion [9]:

“This intensely felt sense of being transgendered constitutes a mental disorder in two respects. The first is that the idea of sex misalignment is simply mistaken—it does not correspond with physical reality. The second is that it can lead to grim psychological outcomes.”

Further, to affirm everything that goes on in a child’s mind, regardless of the facts concerning their bodily developments, may constitute child abuse [10]:

“You won’t hear it from those championing transgender equality, but controlled and follow-up studies reveal fundamental problems with this movement. When children who reported transgender feelings were tracked without medical or surgical treatment at both Vanderbilt University and London’s Portman Clinic, 70%-80% of them spontaneously lost those feelings. Some 25% did have persisting feelings; what differentiates those individuals remains to be discerned….Given that close to 80% of such children would abandon their confusion and grow naturally into adult life if untreated, these medical interventions come close to child abuse. A better way to help these children: with devoted parenting.”

Klass writes that one doctor advises to ask this kind of question:

“In the moment,” means something ultimately transitory, and yet these children are treated as though they are part of the LGBT community almost automatically. Children should be given sound medical advice that allows them to develop naturally, make their own choices, and become responsible adults with the least amount of biological politics possible.