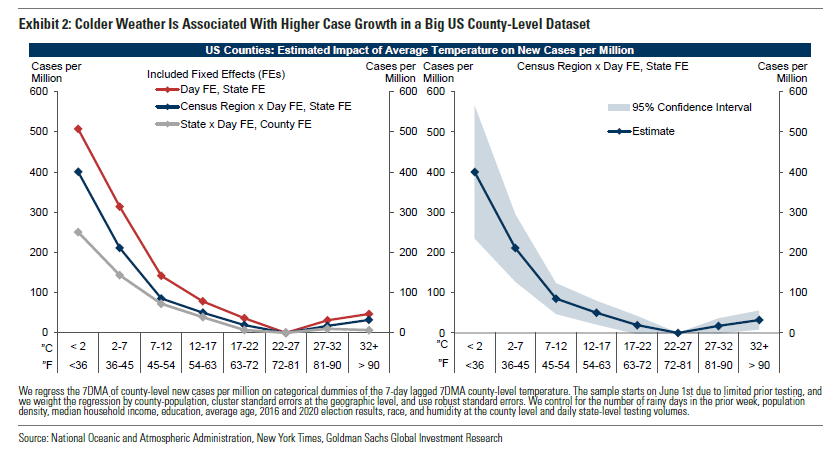 Update (1750ET): Earlier, NY Gov Andrew Cuomo revealed that the state had confirmed more than 5,000 new COVID-19 cases in a single day for the first time since the spring. That came as the US as a whole reported a new record in daily cases, and two more states – Oregon and New Mexico – announced plans to further tighten restrictions. Illinois reported a record number of new cases and hospitalizations one day after Chicago Mayor Lori Lightfoot announced a new lockdown of her own. Texas hospitalizations topped 7k for the first time in 3 months.

After Trump earlier slammed Gov Cuomo for his comments about potentially not trusting COVID-19 vaccines approved by the Trump Administration’s FDA, the governor on Friday said that there will be “no delay” and that NY is ready to distribute the vaccines.

Update (1315ET): As COVID-19 cases surge in Puerto Rico just like they are in Florida and the rest of the US, the island’s governor, Pedro Pierluisi, has activated the national guard to help police enforce a newly implemented COVID-19 curfew.

The new measures, which take effect Monday, will allow people to continue to get exercise outdoors. ALong with the curfew, restaurants, churches and gyms will need to reduce capacity to 30%.

Update (1130ET): Mayor de Blasio has warned NYC parents to plan for a city schools to close again as soon as Monday as NYC’s positivity rate nears the 3% threshold for the 7-day average.

The Mayor added that he and his administration were going to develop a new plan for how they will reopen school buildings this time, which will be out soon.

But will the mayor’s plan account for what one journalist called the “UTF” (United Federation of Teachers, the city’s biggest teacher’s union)?

essential point in an essential thread/piece – all the comments about keeping schools open are mostly ignoring the UFT factor https://t.co/klwEc3zjNm

This isn’t the public’s first warning: the Chancellor of schools wrote an email to parents on Friday warning about the risk of going back to fully remote learning.

Update (1100ET): A team of analysts at JP Morgan have produced some helpful charts. After analyzing county level case data, the bank’s data scientists determined that there is indeed a correlation between colder weather and higher COVID numbers

Update (1000ET): NYC’s latest batch of coronavirus data have just hit, and it looks like the city’s positivity rate has taken one step closer to the 3% threshold at which the mayor has promised to close schools.

As some urge the mayor to reconsider shuttering schools, other cities in the country are sending students back home, or delaying their return to classrooms.

Meanwhile, in Europe, where schools, especially for younger children, are considered essential services, cases per million is far outstripping the US.

Last night, the US notched a new milestone: 150k new cases for the first time, a new record. As cases climb in Europe, even Japan is starting to feel uneasy, as cases increase by 1,685 over the last 24 hours, a second straight daily high.

In India, which has seen case numbers fall in recent weeks, the state of Delhi, home of the Indian capital New Delhi, has reported a record daily high of 104 new deaths and 7,053 new infections. Countrywide, deaths increased by 547 to 128,668 in the past 24 hours. Total infections,  meanwhile, rose by 44,789. Tokyo reported 374 new infections, down slightly from 393 a day earlier, but the third consecutive day of more than 300 confirmed cases, adding to fears of a “third wave”.

As we await more data out of the US, Europe has already seen some tough numbers this morning, with Switzerland reporting a new record-high 6,700 cases. In China, 33 new cases were reported, up from 28 a day earlier. Of the new cases, 32 were imported, according to authorities. The local case, reported in Tianjin, hit a cold storage worker, who had reportedly handled frozen pork, purportedly from Germany, helping China to revive the narrative about the virus now being shipped into the country via mean producers.

Here’s a more comprehensive view of US cases vs. tests.

Finally, in the US, as the backlash to another mandatory lockdown intensifies, a member of Biden’s COVID-19 transition team happened to let slip during a talk with reporters that she didn’t actually think a national lockdown described by another Biden transition-team official would actually happen.

“With all due respect to Dr. Osterholm, that doesn’t necessarily represent the entire advisory board or what the Biden-Harris transition team is planning to do,” Gounder said on CNN. She said that “perhaps there are some places where you need to be more draconian, but I really don’t think that’s a national policy.”

And there you have it, folks: Team Biden’s first lockdown walk back.

Here’s some more COVID-19 news from overnight and Friday:

The American Clinical Laboratory Association, which represents large laboratories such as Laboratory Corp. of America Holdings and Quest Diagnostics Inc., warned that surging demand for Covid-19 tests could push some labs to or beyond capacity, delaying test results (Source: Bloomberg).

Australia will not allow foreign students to return as Canberra prioritizes the return of citizens stuck overseas, Prime Minister Scott Morrison says. Although the government had hoped to slowly allow overseas students to return in 2021 and began trials earlier this year, Morrison says, “There is a queue, and Australians are in the front of the queue.” Australia has since March closed its borders to all noncitizens and permanent residents.

German government spokesperson says Germany cannot talk about a turnaround in COVID infections just yet, no easing of restrictions is possible (Newswires).

South Korea begins fining people who fail to wear masks in public as it reports 191 new cases and as new daily infections creep higher. The tally is up from 143 a day ago, marking the biggest daily rise in two months and bringing the country total to 28,133, with 488 deaths. People caught without masks in nightclubs, malls, theme parks, hair salons and other public places face fines of up to 100,000 won ($89.75) (Source: Bloomberg)

Ohio is at a record for new infections, total hospitalizations and intensive-care patients, Governor Mike DeWine said as he warned, “we don’t want another shutdown” but we can only avoid one “if we are very careful” (Source: Bloomberg).