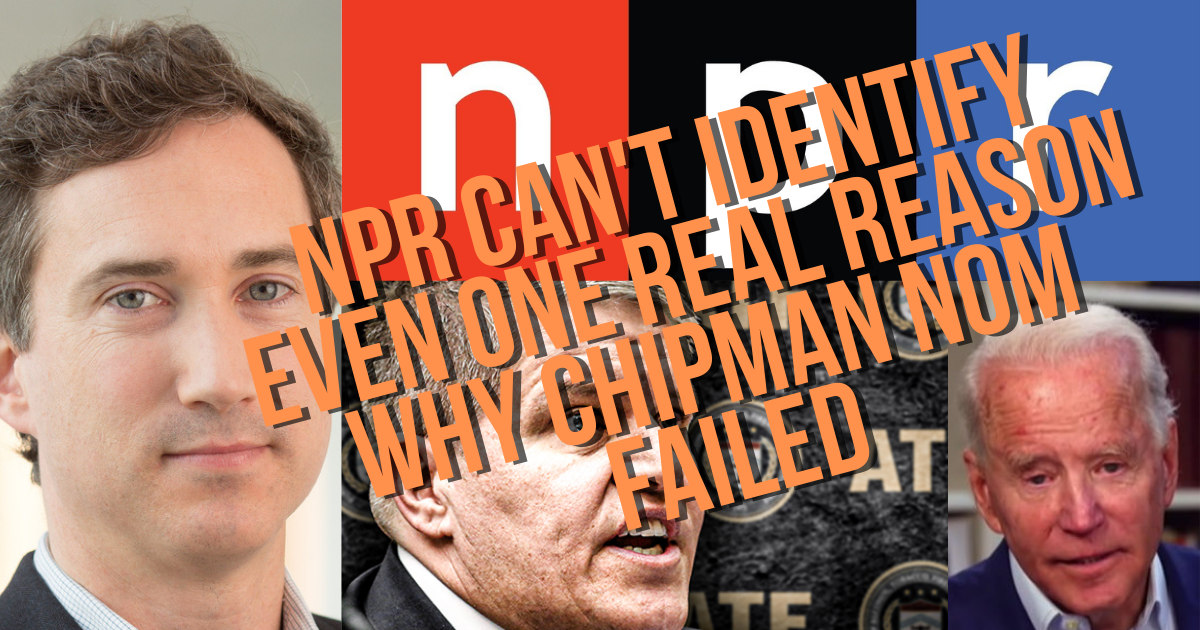 Joe Biden appointed David Chipman to lead the Bureau of Alcohol, Tobacco, Firearms and Explosives within the Department of Justice. Chipman had been a prior agent for the ATF. Chipman was nominated in April 2021, had a Congressional hearing on May 26, and his nomination was withdrawn on September 9, 2021.

The controversy and explanation about why his nomination with withdrawn was entirely muted by NPR’s Ryan Lucas. Lucas is the Justice Department reporter for NPR. By referring to the controversy about Chipman as nothing more than politics, not only did Lucas hide the substance of the story, but he denied his readers important context to the story, mischaracterizing the facts, and dishonestly framing the reasons for Chipman’s nomination failing.

The reason the Chipman nomination failed, according to NPR, was just politics. Here’s how Lucas reports on the matter:

With the Senate evenly divided and Republicans united in opposition, Chipman needed every Democratic and independent senator to push his nomination across the line. In the end, that didn’t happen.

That paragraph could have been, instead, “Chipman failed to get enough Senate votes to confirm his nomination,” aka the obvious. The unstated issue is that the 50/50 Senate, along straight party lines, could have confirmed the Chipman nomination with the Vice President’s tie-breaking vote. The reason Chipman failed was because Democrats also opposed his nomination, but Lucas will bury that information until the literal last sentence of his piece.

Lucas positively quotes Chipman from Biden, who predictably blames it on those evil Republicans. Here’s half of Biden’s laudatory quote to that effect:

Biden said in a statement on Thursday. “Unfortunately, Republicans in Congress have made clear that they intend to use gun crime as a political talking point instead of taking serious steps to address it.”

Is it really surprising that a President would say nice things about the nomination he has previously made? This is giving readers nothing interesting, new or insightful. It’s just the repetition of White House talking points, completely devoid of any substance.

Later, interestingly, Chipman himself blamed the Biden administration for the nomination’s failure. [16]

“Absurd that a vocal opponent of Americans’ constitutional rights was ever picked to run ATF. This is a win for the Second Amendment and law-abiding American citizens.”

This quote, again, tells the reader nothing about the substance of McConnell’s opposition, or that of Republicans.

The framing and deliberate mischaracterization of the opposition makes it all about politics. On some basic level, every political story is about politics. But here, it’s presented as just the basic contest of Republicans versus Democrats, just pure partisan sniping. It’s the assumption of bad faith in opponents to David Chipman without giving NPR readers even a chance to contextualize what the substance of their opposition is.

This seems to be a consistent left-wing media dishonest framing of Republican opposition: it’s all for show, none of it is real, it’s all just about ‘playing to their political base.’

Is there any reason that a person might be opposed to David Chipman?

At the very end of the article, Lucas tepidly admits that moderate Democrat Senators, Joe Manchin of West Virginia, Jon Tester of Montana, and Angus King of Maine, were ‘on the fence’ about Chipman.

Wouldn’t it be interesting to learn what the reasons for their opposition to Chipman were?

That would be critical to understanding why the nomination failed.

It would also go straight against the tired narrative that Republicans are to blame. If anything, Democrats killed the Democrat nomination. Wouldn’t it be interesting to learn why?

Not to Ryan Lucas.

Again, there’s zero context to any substance about why they were on the fence. Ryan Lucas provides not a single sentence of substance to why there was any opposition to David Chipman.

Let’s cut to the chase: there are three primary reasons that were cited in news reports about why Senators were opposed to David Chipman running the ATF:

Let me give some context about those three areas of opposition.

The Chipman Lie about Branch Davidians Shooting Down Helicopters

Other outlets easily included this major Chipman lie in their reporting. Here’s how Russia Today contextualized the opposition to the Chipman nomination: [1]

A 25-year veteran of the ATF, Chipman also lied in 2019 about the agency’s conduct during the 1993 siege and massacre at Waco, Texas, in which FBI agents massacred 76 people, including 20 children at a compound belonging to a religious cult following the unsuccessful execution of an ATF search warrant on cult leader David Koresh for stockpiling weapons.

A congressional report released three years after the siege found that, although shots were fired at the helicopters, none of the aircraft were downed and no ATF agents or National Guard servicemen on board were injured.

Other outlets have documented Chipman’s lie on a Reddit “Ask Me Anything” forum in 2019. [2]

To be fair to Chipman, he is probably meaning to say that by ‘shooting down’ the helicopters were ‘forced down’ but he uses some very inartful language. ATF agents should consider the debacle at Waco, where 76 Texans were burned or suffocated to death [4] under what can only be described charitably as very suspicious circumstances, as an extra delicate topic necessitating verbal precision. That Chipman, as a former ATF agent, blames the Davidians and exaggerates the impact of alleged shots at the helicopters, demonstrates a lack of political tact, tone deafness, and sloppiness with the facts. The DailyMail did a good dissection of the facts around the helicopter issue during the 1993 Waco Siege. [5]

Chipman ran “Giffords”, which is named after Rep. Gabrielle Giffords who was shot in 2011 by crazy Jared Loughner. [6] Loughner shot Giffords once in the head with a 9mm Glock handgun.

The Giffords anti-gun group is so extreme they want to regulate BB guns. They encourage states to treat BB guns as though they are rifles. [7]

The Giffords anti-gun group is so extreme they also want to ban any 3D-printed gun parts, which they amusingly label “ghost guns.” [8] They also want to ban ‘parts kits’ which are pieces of guns sold so that people can repair a broken gun at low-cost. No reliable gun can be printed from a 3D printer, but certain gun parts can be cheaply printed so that the consumer can save money. The only goal in all of these proposed regulations is to inconvenience gun owners and raise prices for guns.

This is not a responsible common-sense level-headed group formulating gun policy. This is a radical group proposing every conceivable regulation to deny gun owners their Constitutional rights. The Giffords group is an extreme-left anti-gun group.

David Chipman’s Toxic Social Media Postings, along with his Wife’s

David Chipman’s social media posts were well documented and quite thorough in making the case that he lacked the mindset and temperament to objectively administer a very controversial agency that primarily regulated the political opponents of those on the political left. [10]

Chipman advocated in a 2019 BBC interview for confiscating guns from people who were accused of posting “hate speech” online. [11]

Chipman purged almost all of his tweets on Twitter immediately prior to his nomination. [12]

Chipman’s spouse also worked for the ATF and was the senior contact for the “Executive Secretariat.” Other outlets said she was a “Division Chief” and the claim was made that this potential source of relationship and workplace conflicts was undisclosed to the Senate. Her social media was also interesting, in that she was fundraising for the anti-gun Giffords group that David was running, she posted “f*** the GOP” in her social media, and also said that Ashli Babbitt, the woman murdered in the Capitol during the “Stop the Steal” protest on January 6, 2021, was a terrorist and anyone who defended her was similarly a terrorist for having those views. [13] Charming woman, really. You have to try her ganache.

Twitter purged any mention of Chipman’s wife, seeking to suppress that information. [14] Celebrating the death of unarmed Americans and labelling them terrorists: the modern ATF and the full expression of the Chipman family.

The Chipman family clearly considers itself at war with half the country that have differing views to their own, whom they consider terrorists, who they would like to have the ability to prosecute.

Later statements by Chipman further prove that he had fundamental misunderstandings about the basics of gun laws. [15] For instance, Chipman keeps repeating this left-wing line that it is easier to buy a gun than to buy a beer. As anyone who has ever bought a gun can tell you, that’s just not true. There’s no paperwork to buy a beer, and a Washington bureaucrat does not get to verify whether or not you get to have a beer for each individual purchase. It’s a wildly irresponsible lie.

This is really all just the tip of the iceberg. Our point here is not to document every reason not to confirm David Chipman, but rather to say that the story about why he was not confirmed includes some of this information, or at least a reference to the existence of these kind of arguments and complaints.

Instead, NPR just said Republicans are partisans. That’s the quality of their analysis, observation, and journalism.