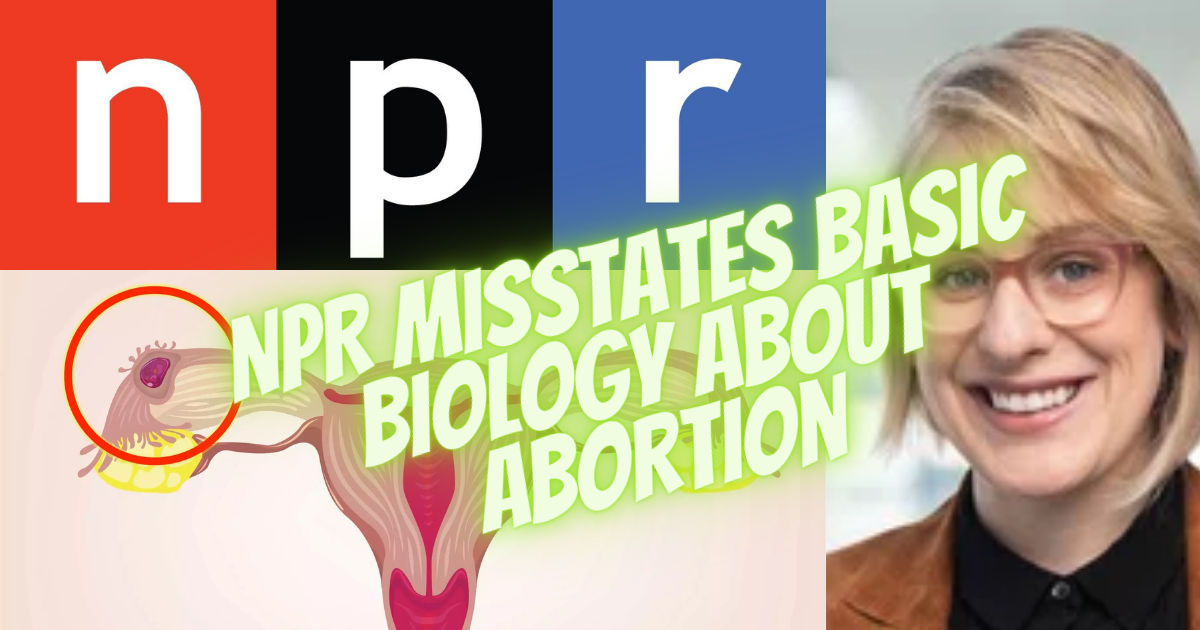 The pro-abortion mainstream media will do or say anything in order to avoid describing the truth about abortion. Abortion is the deliberate destruction of an otherwise healthy child. Abortions happen as either surgical abortions where medical staff use instruments to dissect the child piece by piece, or as a chemical abortion where pills are used to cause the mother’s body to expel the child due to hormonal imbalances.

An abortion is the destruction of a living child inside the mother. An ectopic pregnancy is the implantation of a fertilized egg inside the fallopian tubes of the woman. This pregnancy will never advance, the child has no chance to otherwise survive.

The purpose of ending an ectopic pregnancy is not to kill the child, it is to save the life of the mother. LiveAction has a good write-up plainly explaining the difference. [1] Notably even Planned Parenthood, the nation’s largest abortion clinic chain, describes ectopic pregnancies as a pregnancy, and its medical intervention not as an abortion. [2]

So let’s examine the way in which NPR misstates, mischaracterizes and misses important context on this issue: Here’s the critical phrase: “Abortion clinics wouldn’t exist if they didn’t have to.”

But abortion is not what happens when an ectopic pregnancy is ended. An abortion is the elective destruction of a living embryo.

In 92.4% of observed ectopic pregnancies, the embryo is already observably deceased or undeveloped. [3]

Ectopic pregnancies are rare in the first place, some estimates have it as 100,000 per year. [4] Medically an ectopic pregnancy can be treated sometimes with drugs, or with outpatient surgery. [5][6]

There’s very little debate by anyone on either side of the abortion debate that medical intervention to end an ectopic pregnancy is necessary and moral. Even pro-life groups agree on this point. [7] So the inclusion here is really to present a false straw man: that there is a significant political element opposed to this procedure, and that their irrational opposition here is analogous to their opposition to abortion.

One huge problem in the abortion debate is that the pro-abortion side consistently and chronically lies about its statistics. So it becomes nearly impossible to know how much abortion clinics really ‘have to’ operate, and how many operate merely to coerce vulnerable expectant mothers into killing their unborn children.

One very illustrative example is the pro-abortion meme about 5,000 women a year dying from back-alley abortions.

In his 1979 book “Aborting America” former abortionist, the late Dr. Bernard Nathanson, who co-founded the abortion advocacy group NARAL, describes coming up with that number out of thin air. [8]

The need for abortion was sold to America during the growth of the abortion rights movement as a way to avoid these illegal so-called ‘back alley’ abortions. These were unsafe abortions that caused women to die due to the lack of medical standards and proper care. The common number used is 5,000 women who died every year from illegal abortions. Few question the source of that number.

In Nathanson’s book, he describes sitting around the room and inventing the statistics for how many women died from illegal abortions each year. He describes that 500 sounds too little, 50,000 sounds like an exaggeration, so 5,000 was decided upon. There was no research, it was always just a political number chosen for what seemed reasonable.

Yet, pro-abortion advocates still use these figures even though they are widely debunked.

Here is one current abortion advocate still using these lies: [11]

“5 to 10 thousand American women died each year due to these procedures.”

From 1980-2007, an average of 32 annual deaths nationwide from ectopic pregnancies have been tracked. [12] The rate of fatalities has been dropping rapidly due to improving technology, [13] with an anticipated 29% further reduction over the next decade the next time the data is collected. Even Planned Parenthood refers to an ectopic pregnancy as “rare.” [14]

The rate of surgical abortions has been steadily declining over a generation. [19][20] This past year represented a 7% year over year decline.

So, again, the ‘need’ for abortion clinics is, if anything, greatly declining.

Many argue telemedicine will render the clinics obsolete shortly. [21]

As well, abortion is highly subsidized by a variety of left-wing non-profits and the abortion industry. That industry has worked for decades to try and acquire public funding of abortions. [22] So from a business perspective, abortion clinics are not really needed in a way where people are willing to pay for the service. They are not ‘self sustaining’ businesses in any respect, but are, instead, heavily subsidized and supported from afar by various left-wing interests and foundations. [23]

If abortion were necessary and needed, one would think it could charge prices that would keep it in business.

The article also refers to a “heartbeat” as “cardiac activity” which is just doublespeak to avoid calling the Texas Heartbeat bill a bill about heartbeats. We debunked another NPR story that called them “flutters” to try and achieve the same semantic purpose: avoid calling it a heartbeat. [24] Newsweek followed the same pro-abortion talking point, calling it a ‘flutter.’ [25]

This is a small thing but it just shows the degree they go to in order to deny their readers reality. Every single word and comma is about advancing a pro-abortion agenda and not about actually informing their readers or providing any context.