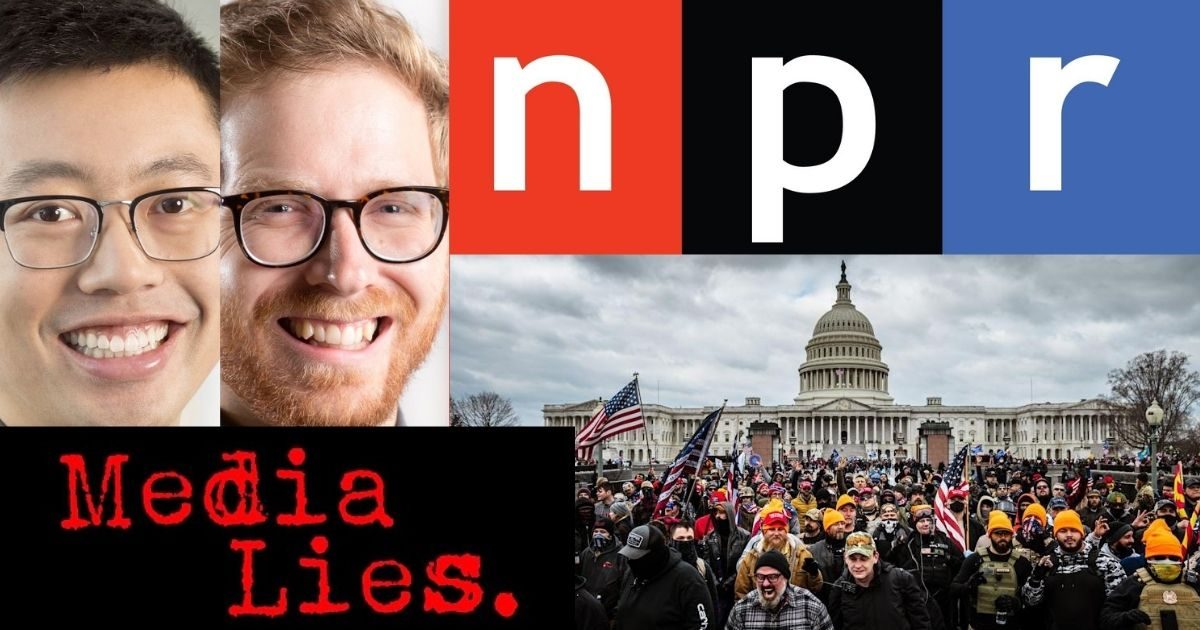 In the first five sentences, three paragraphs, two NPR reporters manage to write out at least five major lies. It’s a pretty remarkable feat, even for National Public Radio. The lies told about the January 6th Capitol protest have resulted in the conditions of imprisonment for dozens of participants, these lies are used to keep these people imprisoned and oppressed. [1]

Here’s how NPR crams in that many lies:

In the wake of the Jan. 6 insurrection at the U.S. Capitol, a popular narrative has emerged: that because rioters did not fire guns that day, they were not really “armed.”

But a review of the federal charges against the alleged rioters shows that they did come armed, and with a variety of weapons: stun guns, pepper spray, baseball bats and flagpoles wielded as clubs. An additional suspect also allegedly planted pipe bombs by the headquarters of the Democratic and Republican parties the night before the riot and remains at large.

Those weapons brought violence and chaos to the Capitol. Capitol Police officer Brian Sicknick died one day after two rioters allegedly sprayed him and other officers with what prosecutors describe as an “unknown chemical substance.” Four other people in the crowd died in the insurrection, and more than 100 police officers suffered injuries, including cracked ribs, gouged eyes and shattered spinal disks.

The definition of ‘riot’ is a way of smearing the entire crowd. It’s a way of saying the entire event was a violent public event. [2] They weren’t all armed, and this is just a statement without evidence. A review of charges filed against some participants is not proof of anything, as there is no penalty for prosecutors overzealously overcharging individuals in these cases.

You can see how they seek to broadly apply the weapons allegation to the entire assembled group in their word choice:

…a popular narrative has emerged: that because rioters did not fire guns that day, they were not really “armed.”

​​Note that they group all rioters together, they make no distinguishing between armed and unarmed ones, and that they were all armed with something. This is smearing the entire group of pro-Trump protesters.

2. The pipe bombs placed a day prior are related to the Capitol Protest

An additional suspect also allegedly planted pipe bombs by the headquarters of the Democratic and Republican parties the night before the riot and remains at large.

This is a matter of creating false connections since there is absolutely no evidence of who this person is, even six months after the event. The connection is meant to again smear the protest participants, even though there is no evidence whatsoever that they are connected to the protesters. It is a major misrepresentation to say so, and making this connection is a lie to readers.

3. The weapons caused the chaos and violence at the protest

There’s no evidence that the weapons caused the chaos, this is all mere speculation. The incidents and physical back-and-forth with officers look to be the result of understaffed Capitol Police, and also escalation tactics from the police as well, including repeated soft pellet and rubber bullets to otherwise peaceful protesters. To say that a weapon caused ‘chaos and violence’ would be to say that a firearm discharge caused a panic. But the FBI has said that there was no weapon discharge, and no weapons were recovered from the protest. So the list of primarily defensive devices does not, by itself, mean much of anything.

The media logic is: a) we say there was violence, b) there were things we call weapons, so c) they were an armed violent mob! But if you can define anything as a ‘weapon’ including a flagpole, then does that mean they were an armed mob? If you follow the awful logic of NPR reporters, then every Trump rally is an armed mob. Pic related.

4. The protesters killed Brian Sicknick with an ‘unknown chemical substance’

We now know that Brian Sicknick did not die from protesters. [3] Many knew even at the time that the Sicknick death story was bogus. [4][5] It’s amazing that this misrepresentation persisted for months, uncritically, from a media that wanted it to be true. [6] There was no autopsy, no photograph, no on-the-record witness, who ever corroborated the media’s insane Brian Sicknick fantasy. [7]

5. Four other people died in the crowd

This is another left-wing lie: the other fatalities were tied that day, other than Ashli Babbit’s execution, to the protest. The people who died were from drug overdoses and natural causes.

The deaths referenced, four civilians, [8] were:

Again, to recap how they lied about this, here’s how NPR wrote about these deaths:

Four other people in the crowd died in the insurrection, and more than 100 police officers suffered injuries, including cracked ribs, gouged eyes and shattered spinal disks.

They were leaving no room for doubt: the protest killed these four people. One point of contrast from recent memory was the shooting death of Captain David Dorn during the Black Lives Matter protests in St. Louis. [9] There, the death of a retired police officer was from ‘looters’ and the CNN story doesn’t even mention Black Lives Matter. The crime is completely separated from the politics.

Here, the natural deaths of two people, and the drug overdose of another, are blamed on those people’s political expressions! It’s really the height of media arrogance to blame victims for their own deaths, and then try and indict the movement they supported for their own deaths.

NPR has told repeated lies about the Trump protest at the Capitol on January 6th. This article is replete with lies and purposeful falsehoods.