No, the Patriarchy Did not Keep Hillary out of Space 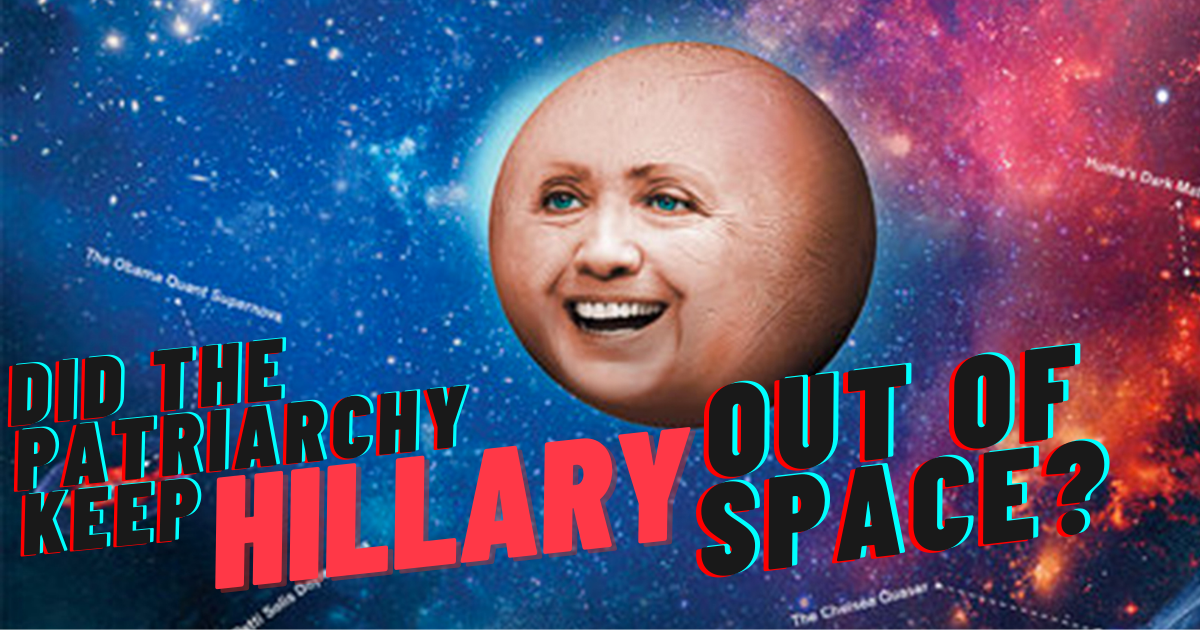 Young women in 1962 were potentially told that they couldn’t become astronauts in the near future, this is used as an example of pre-feminist attitudes. The major missing context in this argument is that, even if Hillary Clinton is telling the truth, which is hard to fathom given her reputation, the source pool for astronauts were specialist military test pilots until 1978, at which point women were admitted.

This controversy is exaggerated and given a dishonest frame overall to prove a point about feminism. And the major credibility gaps in both Hillary and the underlying documents make this overall claim very suspect.

Hillary Clinton claimed in the 2016 debates that she wanted to be an astronaut but was told by NASA that they weren’t taking girls.

The Washington Post has documented that she has repeatedly made this general claim for many years.

The Post did this in a fact-check on her claims, that they ultimately rated true. [1]

Their basis for rating it true was that other letters exist around the same time, even though their authenticity is in dispute, and that lines up generally with Hillary’s story.

Yet if you read their own Washington Post policy guide on fact-checking, it violates their basic precepts:

“The burden for proving the accuracy of a claim rests with the speaker, however.” [2]

Hillary has never proven this claim, she just skates by with anecdotal evidence that is hard and nearly impossible to verify. And even more than that, if you examine the basic claim that Hillary is making, it fails on that basis as well because the letter does not read in the way that she claims.

What the Washington Post decided to fact-check was whether Hillary sent the letter. And as it would happen, since NASA does not keep records of past correspondence like this, there’s no way for us to determine whether this well-known-liar is being truthful in this case.

But what we can note is what was the actual policy at the time and whether it was excluding women as a matter of course.

We can examine the way in which this story is being appropriated for political purposes, and note whether that claim matches up with the available historical evidence for the period.

And on that basis it does not, and that is why we have rated this claim false.

Hillary is using this story as a pre-feminist tale of the evil patriarchy putting limits on women. This story is dishonestly framed as a question of feminism and female heroes contrasted with the heroes of the space program.

Hillary wanted to be an astronaut, and Hillary could be anything can’t you see, and only those evil old attitudes prevailed!

Here is the evolution of her description of the key phrase in this story:

Hillary in 2003: “I received a letter back informing me that they were not accepting girls in the program.”

Hillary in 2009: “And I got a letter back saying that they weren’t accepting women.”

To be clear, we do not have in evidence either Hillary’s letter to NASA, nor NASA’s claimed response to Hillary.

The claim is that Hillary wrote to NASA when she was a teen and asked if she could be an astronaut. The year would have been 1961 because she often references President Kennedy’s goal of getting to the moon. Kennedy’s famous “we go to the moon” speech at Rice University was in September of 1962. [4]

So if Hillary were preparing to become an astronaut, she would be aiming for the year 1987 to become one.

NASA started accepting non-military people, including women, as astronauts in 1978.

Armstrong, Aldrin, and Collins came out of the military’s test pilot campaign. The reason for this was multiple: 1) it shortened the time-frame to get security clearances, 2) it provided a pool of people who were under military discipline, 3) it ensured that people involved were in top physical condition.

The Eisenhower administration had directed that the simplest way to get a pool of potential astronauts in the shortest period of time was to draw from this pool.

Scientists were the first type of non-military people to be chosen, starting in the 1965 astronaut selection pool.

But there was a significant break in the astronaut selection pools from 1969, where the next pool was not until 9 years later, in 1978, to support the brand new space shuttle program. This pool, the first since 1969, included women. [9]

Hillary was 31 in 1978. If she was given the advice that she could not be an astronaut, it was wrong by the time she came of age.

And it was wrong not necessarily because the role of women had changed, though that may be an issue, but more substantially it had to do with the fact that the astronaut pools were no longer coming from the military, with an emphasis on high-intensity and combat experience.

The accurate statement in 1961-62 is that NASA was not recruiting anyone, men or women, who were not being sourced from the military. They were not taking women because the military was not training women for those kind of roles. A teenage boy who wasn’t about to enter the military faced the same barrier to entry that Hillary faced: the path forward involved very specific military experience at that time.

Is this a reflection of the patriarchal attitudes of the time or a reflection of the space race seeking to streamline the process to get a candidate pool of astronauts ready? Perhaps it is both, and this does not discount Hillary’s claims completely.

But it shows the missing context to the claim: it implies a bad faith assumption as to the motives of NASA in rejecting her interest in the space program.

Several letters have surfaced claiming to be similar rejections of women.

One is the “Miss Kelly” letter from 1962. [10] The Clinton campaign cites to this letter, to a University of Connecticut student. The Washington Post notes that some question its authenticity.

What does the letter actually say?

“Your offer to go on a space mission is commendable, and we are very grateful. This is to advise that we have no existing program concerning women astronauts nor do we contemplate any such plan. We appreciate your interest and support of the nation’s space program.”

The text of this letter, and others, is used to foment a great deal of feminist indignation. [11]

The letter seems brusque and short. It’s no wonder that many do not believe these letters to be accurate, and they have not been able to be properly sourced and authenticated.

But the text may support Hillary’s misinformed conclusion, but does not reflect NASA’s actual policy at the time: both men and women were not being recruited for the astronaut program if they were not coming from the military first, and by 1965 that they were advanced scientists. [12]

Even the 1969 class were transfers from the secret Air Force “Manned Orbital Laboratory” which was a cancelled mission to make a reconnaissance platform in space. [13]

The point is that no one entered the astronaut corps except through the military, and the military was giving this experience to assist in its combat roles. The military kept women out of all combat roles until 2015. [14][15]

Did Hillary actually send and receive this letter to NASA? We will never know.

Did NASA accept women in 1962? No, but that deserves significant context and clarification since they were not just excluding women but also most men.

Could Hillary have been an astronaut if she had applied? Yes, if she would have met the other standards, by the time she was the right age the program was accepting women and putting them into space.

Did the patriarchy keep Hillary out of space? No.