No, the NRA isn’t funded by Russia, despite Newsweek’s Lies 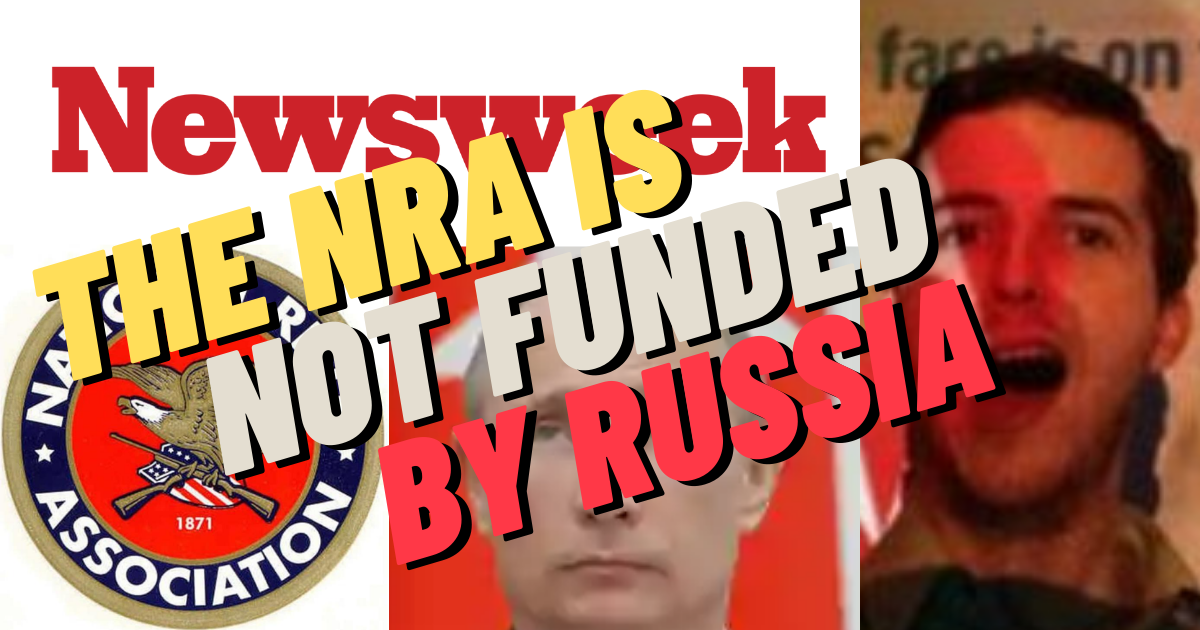 Newsweek doesn’t really have any serious evidence the National Rifle Association is funded by Russia, so they just imply that there is evidence.

The handful of dues-paying NRA members from Russia are so small that they keep context away from their readers in case they would see how ridiculous their claims are.

Here is the crux of Newsweek’s primary argument that the NRA is funded by Russia:

In 2018, the NRA admitted that it had received contributions from 23 Russians or Americans living in Russia since 2015, amounting to just over $2,500 in “routine payments” such as membership fees or magazine subscriptions.

Nowhere in the article does the reporter give necessary missing context as to how many members there are of the NRA, and what their annual budget is.

That means, even assuming there are only 3 million NRA members, that .0007% of the membership are Russians, and .000197% of the organization’s annual revenues came from Russian members.

Let’s compare to another organization that has dues-paying members, like… oh say… Newsweek.

So the comparison would be if Newsweek had 11 Russian subscribers out of their 2012 circulation numbers, and if they were rewarded with $278 extra annual dollars from these Russian ‘agents’ aka ‘subscribers.’

Would anyone reasonably think that Newsweek was influenced by these Russians for such paltry subscriber numbers and such paltry contributions to their annual bottom line? Of course not.

This is why Newsweek did not give their readers the necessary missing context relating to this claim.

Newsweek used a lying headline to say this:

Is the NRA Funded by Russia? What We Know and What We Don’t

And notice how they imply that they are funded by Russia.

Even though that is factually untrue. There is no funding disclosed coming from the government of Russia.

The question really is, given the available evidence, was whether the NRA is funded by Russian Citizens? And of course to the extent that they receive *any* funding at all, it is so minor and insignificant as to be irrelevant.

No funding from the Russian government has appeared anywhere in evidence. So this is a complete fabrication by Newsweek.

But this leaves the lazy left-wing reader, who often only consumes headlines and doesn’t bother researching these things, to blithely say that the NRA is funded by Russia.

It is a convenient way to stigmatize, smear, and delegitimize pro-gun political opponents.

It’s completely inaccurate and meant to spread those inaccuracies among their readership.

This should be textbook disinformation, spreading news that one knows is false for the purposes of instilling false narratives in the public for a private political agenda.

Newsweek then engages in more Russophobia in the article, but repeating the canard that Maria Butina was a “Russian Agent.”

Butina pled guilty to being an unregistered foreign agent in 2018.

Here is how Newsweek referred to her:

According to an investigation, headed by Oregon Democratic Senator Ron Wyden, a number of officials traveled to Moscow in December 2015 for a trip organized by Torshin and fellow Russian national Maria Butina.

Butina, a gun activist, was later jailed for 18-months after admitting to acting as an unregistered foreign agent to infiltrate conservative political groups in order to influence foreign policy which would benefit Russia before and after the 2016 election.

Even a small amount of research into the Butina case would have turned up an important article that lays out the problems with the Butina prosecution. Intelligence Community Historian James Bamford wrote a compelling piece in the New Republic, no bastion of right-wing thought, that the charges against Butina were mostly political and superficial. [7] 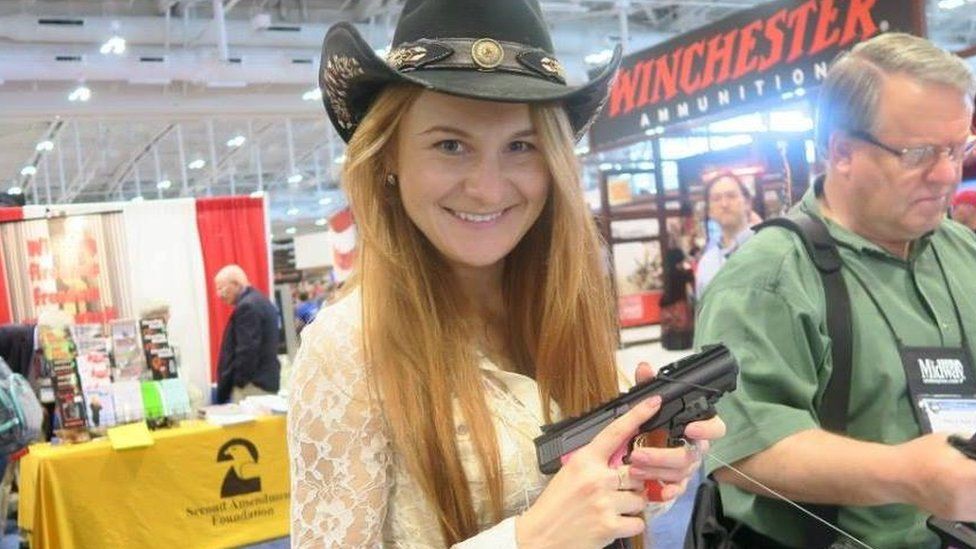 Here’s what Bamford said, it’s a long excerpt but it ultimately shows how ridiculous the charges against Butina were:

It is also another example of the media marching in formation with the government, as it did in the lead-up to the war in Iraq. “I think journalism skepticism stops at whatever a prosecutor says,” the former assistant U.S. attorney told me. “If you’re supposed to afflict the powerful, the most powerful people to afflict are the people who have the power to put you in jail. But those are the people reporters are so often most credulous about.”

A senior CIA official who held one of the highest jobs in the agency’s Clandestine Service, and who worked closely with the FBI on many spy cases, offered a cynical view of the bureau’s counterintelligence work. “They want to generate headlines. They don’t care if the information is credible or not,” he said, asking to remain anonymous because of his past clandestine work. “I feel sorry for Butina; she got caught up in this whole vortex. They’re just interested in putting another notch in their belt, and they don’t care who gets hurt in the process.”

Driscoll, Butina’s attorney, is a former deputy assistant attorney general with the Justice Department’s Civil Rights Division and has handled political and national security-related cases for decades, but never anything like this. “I wake up periodically at night and think this case is taking place in some alternative reality,” he told me. “A ‘spy’ who uses no tradecraft and posts her every move on social media; a ‘handler’ who travels with and communicates openly with his charge; and a ‘mission’ to somehow undermine the United States by having friendship dinners with Russians and Americans seeking peace.”

On November 23, 2018, Butina went to sleep on a blue mat atop the gray cement bed in her cell, her 81st day in solitary confinement. Hours later, in the middle of the night, she was awakened and marched to a new cell, 2E05, this one with a solid steel door and no food slot, preventing even the slightest communication. No reason was given, but her case had reached a critical point. Prosecutors were hoping to get her to plead guilty rather than go to trial, and had even agreed to drop the major charge against her: acting as an unregistered foreign agent of Russia. Born and raised in Siberia, she is terrified of solitary confinement. Fifteen days later, still in solitary, she signed the agreement, pleading guilty to the lesser charge, one count of conspiracy.

Bamford makes a very compelling case that the charges were nonsense, that Butina was pressured and coerced into a confession, that the goal was getting a political win, and that Butina was very likely not a spy of any sort. The Bamford article is long, but lays it all out very well.

Let’s compare again to how Newsweek dissembles this situation:

Butina, a gun activist, was later jailed for 18-months after admitting to acting as an unregistered foreign agent to infiltrate conservative political groups in order to influence foreign policy which would benefit Russia before and after the 2016 election.

They’re clearly just saying she’s a spy without saying explicitly that she’s a spy. Her crimes primarily seem to be involvement in U.S. politics, which she regularly broadcast on social media. Since being deported to Russia after serving her sentence, she is involved in politics, got elected to the Russian legislature, and is critical of the U.S. prison system and foreign policy. [8]

In short, she seems to be the same political person she was before, as she is now: politically engaged and making valuable political connections. There’s virtually no serious evidence she was a spy as opposed to a motivated and ambitious political junkie, so this is a major mischaracterization by Newsweek.

But Newsweek is wedded to this hoax/meme of showing the NRA is somehow a puppet of the Russian government. They keep repeating this lie even though their evidence is laughable.