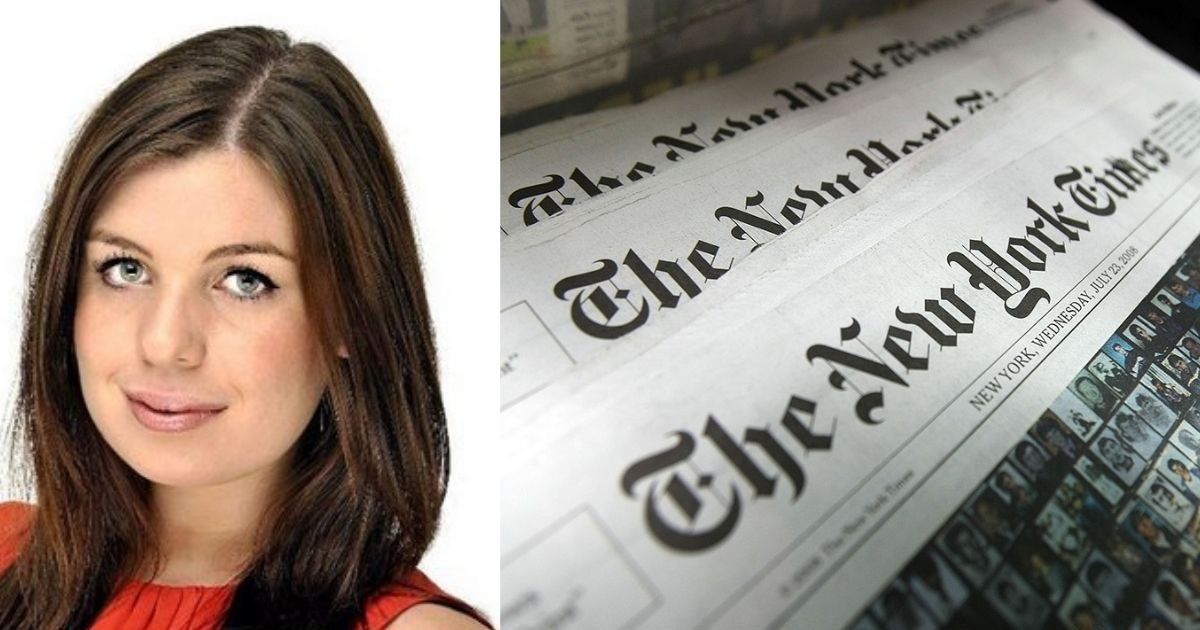 In this news article, Robertson reports that Nikole Hannah-Jones will refuse to work at the University of North Carolina as a journalism professor if she is denied tenure. Jones’ lawyers claim this is a matter of racial discrimination. Though Robertson is supposedly reporting only the news, she leaves out the relevant controversy involving the 1619 project as well as Jones’ tendentious and violence-provoking comments.

These are two aspects that are crucial to reporting this issue in a fair and balanced way, otherwise readers are merely getting the same narrative that Jones and her lawyers are feeding to the NYT.

The first paragraph of the story is the most current update on a widely reported story involving the founder of the 1619 project, Nikole Hannah-Jones:

“The Pulitzer Prize-winning journalist Nikole Hannah-Jones has told the University of North Carolina that she will not join its faculty as planned next month unless she is granted tenure, according to a letter from her lawyers.”

A serious matter that is ignored in this article is the caliber of Hannah-Jones’ scholarship. If I were reporting on this issue, I would include this as vital information to understanding the veracity of Hannah-Jones’ claims of racism. Otherwise, Robertson leaves the reader with an unbalanced presentation of the issue:

“Ms. Hannah-Jones, a correspondent for The New York Times Magazine, had agreed to teach at the university’s Hussman School of Journalism and Media as the Knight Chair in Race and Investigative Journalism. Her appointment drew bitter opposition from conservatives nationwide over Ms. Hannah-Jones’s role in creating The Times’s 1619 Project — an ambitious series that reframed the history of the United States through the lens of slavery — and she was ultimately denied tenure.”

Jones’ greatest claim to journalistic excellence is the well-known 1619 project. [1] A balanced look into the project will reveal that Jones not only published hearsay and patently false claims, but continued to aggrandize her own career off of the project while denying she made any errors. It seems politics elevated her academic career, not the reverse: that her academic career was jeopardized because of politics.

The 1619 Project, published by Robertson’s own publication, aimed to reevaluate American history on the basis of slavery — the American colonists fought for independence to preserve slavery, Jones alleged. However, Jones’ reporting on the American Founding quickly fell apart.

Only a month after the piece was published in August 2019, critics voiced their doubts about the truth and accuracy of the reporting. Eventually, The National Association of Scholars called for the Pulitzer board to revoke Jones’ prize on the basis of the unfactual and biased claims made in her piece. Here’s what the letter says [2]:

“Prominent historians, most of them deeply sympathetic to the Project’s goal of bringing the African American experience more fully into our understanding of the American past, nevertheless felt obliged to point out, in public statements beginning in September 2019, the Project’s serious factual errors, specious generalizations, and forced interpretations. Hannah-Jones did not refute these criticisms or answer them in a respectful or meaningful way. Instead, she dismissed them.”

The Letter mentions an incident in December 2019 when five prominent historians expressed their “strong reservations about important aspects of the 1619 Project” [2].

Eventually, the letter writes, the Times had to issue a correction.

“Beginning almost immediately after its publication…the essay and the Project ran into controversy. It has been subjected to searching criticism by many of the foremost historians of our time and by the Times’ own fact checker. The scrutiny has left the essay discredited, so much so that the Times has felt the need to go back and change a crucial passage in it, softening but not eliminating its unsupported assertion about slavery and the Revolution…”

Seven months after its publication, the Times changed a major part of the article, from all colonists to some, that destroyed its main thesis. The magazine’s editor-in-chief, Jake Silverstein, wrote [3] [4]:

“Some” is a radical difference from “all” in this case. Is “some” one? We know that “all” is “all.” But “some” could be “that one guy from New Jersey that nobody likes.”

“All” is a pretty damning political statement: the entire American Revolution was just a pretense to continue enslaving American blacks.

“Some” is a typical college freshman trying to be edgy in their American history class by making overgeneralizations they know they can’t back up with, you know, evidence and research.

When their signature “all America is racist” project goes from the former to the latter, you know it means that they realize they don’t have the facts on their side.

The Federalist reported another deception on the part of the NYT and Jones in refusing to acknowledge their errors [5]:

“In September, the project was deceptively edited again to omit ‘true founding’ from its description of 1619’s role in the United States, again undermining a core tenet of the project.”

You could call this “whitewashing” but the puns would just get. out. of. control.

A scathing indictment continues from the National Association of Scholars’ letter on Jones’ unwillingness to admit her errors:

“Correcting factual errors in their published works, of course, is an important responsibility of both the journalistic and scholarly press. But such corrections are typically and rightly made openly and explicitly. The author and the publisher acknowledge an error and correct it. That is not what happened in this case. Rather, the false claims were erased or altered with no explanation, and Hannah-Jones then proceeded to claim that she had never said or written what in fact she has said and written repeatedly, assertions that the Project materials also made.”

Corrections are appropriate for good faith errors. Minor things. Getting a date wrong. But here: this is their entire thesis! This is the entire point of her project.

Her thesis is: American Revolution was 100% racist.

When that is found to be false, it’s not a small thing, it’s not a minor error, she didn’t read the wrong source or make some small accident. This was her entire premise.

So, not only is Jones’ journalistic integrity in question, but her one claim to fame — the project’s bombshell claim about the American founding — was revised. To make matters worse, Jones countenced violence in June of 2020 when she said “it would be an honor” to label the violence that spread across the country, destroying businesses, property, and tearing down statues of beloved American Founders the “1619 riots.” [6] [7]

Robertson’s only description of the 1619 project does not include any of this information. Instead, she describes it thus [8]:

“Ambitious” is the most superficial and inaccurate term she could have used to describe a project that has been denounced by historians, scholars, and journalists as false and pernicious. False does not mean ambitious.

Otherwise, Jones and her lawyers dictate the narrative and whitewash the controversy that is most relevant to the story and to the readers.

OUR RATING: = #FakeNews. This is what you’d expect on CNN playing to an empty airport.