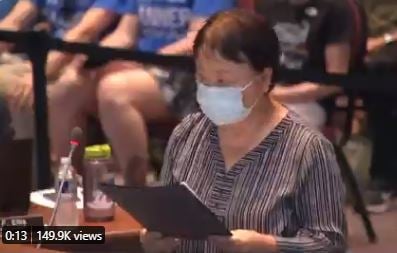 This week several parents and teachers in Virginia confronted the local school board for pushing the hate-filled and racist critical race theory indoctrination in their school system.

Leftist teachers and administrators across the country today are pushing this race-based indoctrination that teaches children to hate white people and their country.
It is an indoctrination straight from hell.
This is the modern-day left in America.

During the meeting this week a Virginia mother of Chinese origin stood up to compare Critical Race Theory to the Chinese Communist Party.

In an eloquent speech, Xi Van Fleet described why these two ideologies were similar and dangerous.
How sad that this is happening in America today.

TRENDING: Jill Biden Throws Shade at Melania Trump with Tacky Message on Back of Her Jacket (VIDEO)

A Virginia mom who endured Mao Zedong’s Cultural Revolution before immigrating to the U.S. ripped a Virginia school board at a public meeting Tuesday over its stubborn support of the controversial critical race theory.

“I’ve been very alarmed by what’s going on in our schools,” Xi Van Fleet told the Loudoun County School Board members. “You are now teaching, training our children to be social justice warriors and to loathe our country and our history.”

She likened CRT, which critics deride as a form of “neo-racism,” to China’s Cultural Revolution, a Mao-led purge that left between 500,000 and 20 million people dead from 1966 to 1976. The estimates vary greatly and many details have been shrouded in secrecy for decades.

Watch a brave parent who grew up in Mao’s China point out all of the identical traits b/n the Cultural Revolution and what LCPS, and really every school system, are doing through the use of CRT. pic.twitter.com/zH7XuyBmW6