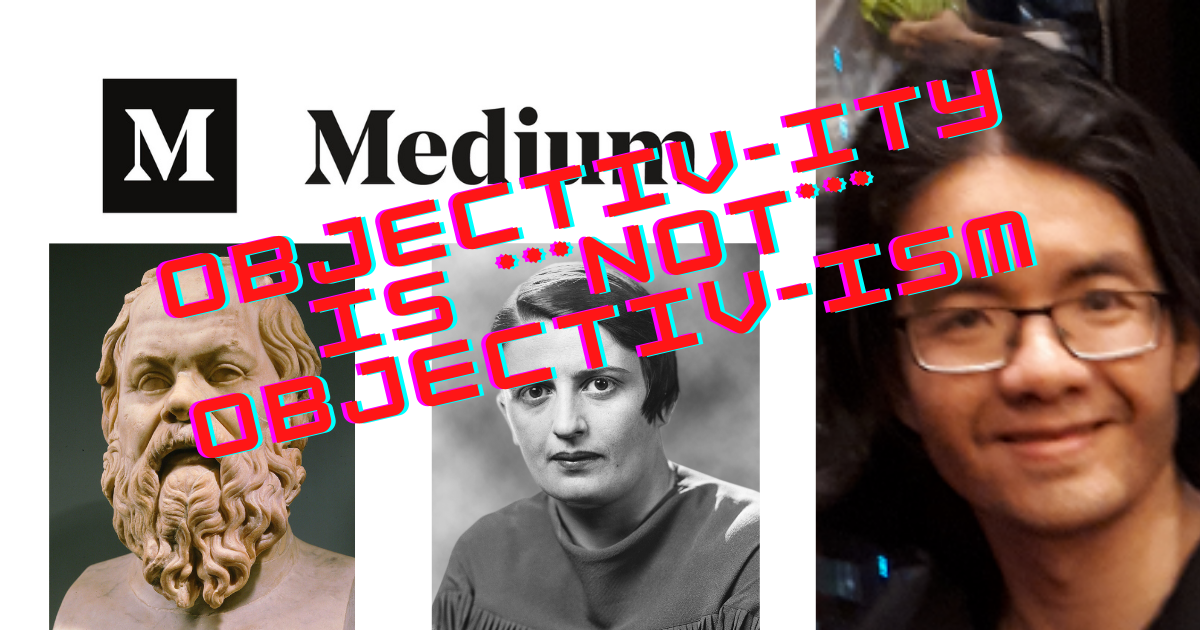 Look, we’re not in the business of fact-checking opinion articles, much less the million left-wing morons who blogpost at Medium, but occasionally there are such profound errors that they demand correction.

And when Medium, through its website and its emails, amplifies these errors it additionally calls for fact-check correction. Simple left-wing factual errors enter political discourse as memes that can’t be unpackaged and it cheapens political discourse.

All of this is to say that when Andrew Cheng confuses ‘objectivity’ and ‘objective’ and ‘objectivism’ – you can’t rely on the media or left-wing readers to have the patience to look up words and see that, though similar, they do not always mean the same thing.

The headline and subhead could tell you that this article was troubled and in serious need of review:

Facts Don’t Care About Ayn Rand’s Feelings
So tell the Alt-Right to stop stating their feelings as facts.

So we’re conflating the Alt-right with Ayn Rand using Ben Shapiro’s most well-known talking point? Is anyone else confused yet? Something about emotions.

Just to recap, the media likes portraying the ‘alt-right’ as a bunch of nazis, [1][2][3] who apparently according to Cheng take their philosophical and emotional cues from Jewish Ben Shapiro [4] and ethnically Jewish Ayn Rand, whose original name was Alyssa Rosenbaum. [5]

Let’s just get that out of the way as one of the more peculiar parts of Cheng’s analysis here. He doesn’t even attempt to reconcile those facts with the major media framing of the alt-right as essentially neo-nazis. Is he saying the alt-right is not anti-semitic? That would be a novel interpretation, but he doesn’t even bother going into these things.

But an amazing part of Cheng’s analysis is that he says absolutely nothing about the ‘alt-right’, he just trashes on Ayn Rand for the entirety of his piece. He makes some odd reference to Ben Shapiro’s classic phrase, ‘facts don’t care about your feelings’ but that’s about it. The understanding and depth of the ‘alt right’ is notably absent, even by reference, in the piece.

Ayn Rand is every entry-to-Philosophy 101 professor’s favorite whipping boy. She serves as a convenient foil for high-minded academics who then proceed to fall in love with deconstructionism, communism and meaninglessness. Her philosophy of Objectivism is one that usually only her die-hard fans actually subscribe to. [6]

For what it’s worth, here’s what wikipedia says are the central tenets of Objectivism:

Objectivism’s main tenets are that reality exists independently of consciousness, that human beings have direct contact with reality through sense perception (see direct and indirect realism), that one can attain objective knowledge from perception through the process of concept formation and inductive logic, that the proper moral purpose of one’s life is the pursuit of one’s own happiness (see rational egoism), that the only social system consistent with this morality is one that displays full respect for individual rights embodied in laissez-faire capitalism, and that the role of art in human life is to transform humans’ metaphysical ideas by selective reproduction of reality into a physical form—a work of art—that one can comprehend and to which one can respond emotionally.

Even wikipedia is careful to make sure you don’t confuse Objectivism with Objectivity, which, you know, is totally different.

Objectivity relates to being able to say whether something is universally one way or another, regardless of the viewer’s desires or prejudices.[7] It’s kind of a way of saying facts don’t care about your feelings, if you’re into that sort of thing.

So after going through all of this, I should note what the central thesis of Cheng’s Medium article is, what his central beef is here:

In an interview with PBS, Donald Trump’s former Justice Department spokesperson Ian Prior said the following about critical race theory:

I can’t help but notice Mr. Prior included the word “objective” in his declaration that America is not a systematically racist country. Most people of color would contend such a statement is patently subjective, the biased opinion of yet another white man who doesn’t appreciate how good he has it in the world.

So while critiquing critical race theory, a former DOJ spokesman said we should teach history in an objective way.

From that one word, ‘objective’ – Cheng manages to racialize a non-racial issue by saying its a dog whistle of some sort to really get the Objectivists excited. Cheng just saw the word ‘objective’ and from that, surmised that the evil dead hand of Ayn Rand was at work.

This is such utter nonsense its amazing a self-publishing site doesn’t set itself on fire in shame for letting stupidity like this run rampant.

Here is one of Cheng’s ending paragraphs:

Ayn Rand’s philosophy is many things, but it’s definitely not objective. She has never outgrown her rebellious teenage phase, and neither has Ben Shapiro and those of his ilk.

There is this terrible left-wing obsession with redefining and perverting language. It makes them bad faith debaters and near-worthless to have a political discussion with, since they will redefine language in order to protect their worldview. When the facts don’t care about their opinions, they just change the vocabulary.

But if we were to use language to say Rand’s philosophy is not objective, then what is it? It’s just a subjective temper tantrum? What values does Ben Shapiro have other than continuously quoting his one line that is a sly reference to objectivity? Cheng presents none. What values and beliefs does the ‘alt right’ have that match, mirror or conflict with Rand and Shapiro? Cheng offers us literally nothing.

Cheng is conflating two different words because they sound similar, and saying it’s all bad because he doesn’t like the conclusions. There is no connection between a statement about teaching history from an objective view, and the unrelated philosophy of objectivism.

Cheng also makes this claim without evidence: “When Ian Prior describes his version of history as objective, he blatantly omits the historical data provided by adherents of critical race theory.”

There’s no escaping it, Andrew Cheng is objectively a moron.