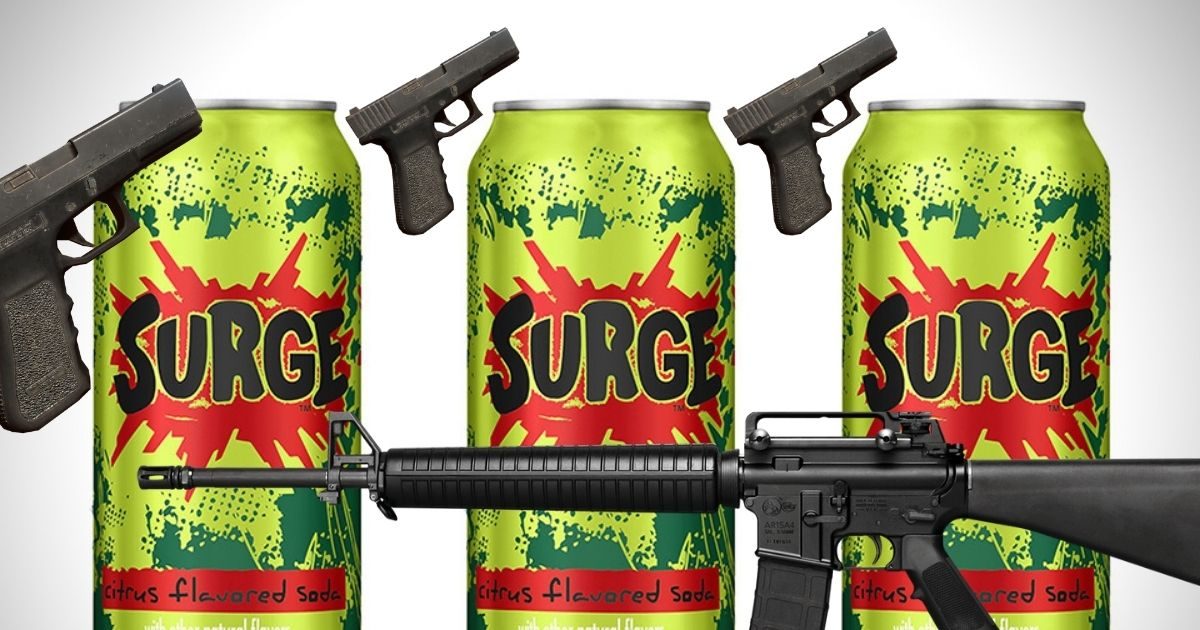 Whenever mainstream outlets use the phrase “surge in gun violence” or “surge of gun violence” you can be relatively assured that they are arguing via left-wing meme rather than any useful statistic.

Most importantly, when someone hears ‘gun violence’ they are likely thinking criminal use of a gun, when that phrase is deliberately vague so as to overinclude many gun uses that most readers would not intend, such as suicides, defensive gun uses, and accidental discharges.

But this phrase, ‘surge in gun violence’ is so commonplace that it appears in many mainstream outlets, even when they provide no evidence for the statistical rise in violence, no theory as to why it is rising, and no causal allegation of any kind. In deciphering the liberal journalist’s mind guns just decide to occasionally, en masse, get rowdy and start shooting irresponsibly.

“‘The work of this office is really ramping up to handle the surge in gun violence,’ Schmidt said.”

For context: Mike Schmidt is the new prosecutor for Oregon’s Multnomah County. He is complaining about having to handle a ‘surge in gun violence’ while he is letting off Antifa protesters who laid siege to a federal courthouse for months. Schmidt has bragged about having friends, ‘old buddies,’ with Antifa members. His election was financially supported by a George Soros PAC. He has said he refuses to prosecute ‘protesters’ no matter how violent they were. Schmidt himself is apparently being investigated for selective enforcement of the law against only those on the right and not the left.

And to be fair, the entire article presents a variety of the challenges facing Portland. But it uncritically allows this quotation as a legitimate way to blame it all on gun ownership. It’s the idea that if only the private ownership of guns weren’t allowed then crime would disappear.

Many nonsensical and illogical left-wing memes seek to cast blame for left-wing policy failures on the right by blaming some intangible with zero logical argument about causation.

Here’s the blandest description of their structure of thinking:

Team Red’s prescriptions don’t work as advertised, so it must be because Team Blue has too much of Thing 1.

Here are some examples of that thinking, applied:

Left-wing global warming predictions never come true, so it must be because Conservatives use too much air conditioning.

Left-wing gun control never works to end gun violence, so it must be because Conservatives own too many scary AR-15’s.

Left-wing policies to help the poor never work, so it must be because Conservatives have too much money in their 401k’s.

Left-wing racial policies don’t improve race relations, so it must be because Conservatives have too much racism.

At no point does the media concern itself with whether there is any direct logical causation between the claimed problem and the implied solution. No one asks the reader’s logical question of whether the policy prescriptions make any sense.

There is an irrational media default that any neoliberal policy solution is of course reasonable and rational, and above skepticism in its methods and causes.

The New York Times used the phrase “surge in gun violence” again in this article:

“Gun rights advocates say the adoption of so far-reaching a law in Texas, long considered a bellwether of gun rights legislation, could encourage similar conservative legislation in other states. Critics, including some senior law enforcement officers, call the new legislation a dangerous retreat from gun control amid a recent surge in gun violence, particularly in a state with a long and painfully recent history of mass shootings.”

It’s worth remembering that the phrase “gun violence” is very different than “gun homicide” because the former includes suicides and even defensive uses of a gun, whereas the latter does not. We recently fact-checked the New York Times for being very slippery in this regard. This phrasing matches and mirrors the gun control lobby, which is always troubling when a news outlets editorially appropriates one political side’s preferred lexicon over the other’s, it’s yet another indication of bias and prejudice on the topic.

Here’s ABC News making the illogical connection between ‘gun sales’ and ‘gun violence’ – never bothering to note that few, if any, criminals obtaining guns go through a gun dealer.

As the nation grapples with a surge in gun violence and record gun sales, the U.S. Supreme Court said Monday it would consider whether Americans have a fundamental right to carry a handgun outside the home for self-defense.

But see how the ‘surge’ is portrayed by using the narrative framing of the ocean of violence surge came in, and of course all these things are related.

Here’s a good example of that:

During Thursday’s COVID-19 briefing, Gov. Mike DeWine addressed the surge of gun violence across the state that has left 17 people dead since Aug. 14, including an eight-year-old girl from Akron.

Heavy on anecdotes, light on statistics, is there a ‘surge’ or is it just a way to put the gun issue in context where you’re saying there’s a lot of bad gun stuff happening but you’re too lazy as a journalist to provide any kind of facts, statistics, or context. The ocean of gun violence killed 17, and specifically this individual child that we will now talk about.

If they are going to describe victims, whose only trait is that they managed to get shot, surely these outlets would give readers a better picture of the person committing the violence.

Journalists are engaged in a quiet implicit conspiracy to protect criminals from letting us know who they are, and what their common traits are, they want to keep our mind off of criminals because it might lead to tough-on-crime policy measures that they ideologically dislike. If they told the truth about the rampant crime in many areas it would threaten their liberal shibboleths.

The first time that “surge in gun violence” appears is 1994 in an Associated Press report about this Birmingham Alabama shooting:

“Ippolito said about the surge in gun violence in and around schools.”

There was a “rash” of shootings in a given location. You get a temporary rash and then it clears up and goes away. Nothing to see here. The rash was caused by this unexplainable ‘surge’ in gun violence.

This framing is tied to the idea that more guns means more crime, something that has been studied and, to be charitable, is at a minimum hotly contested by academics and activists.

Something that is under active debate should be treated, without the presence of a clear consensus, with some respect to both sides. But you can see that the basic premise and left-wing meme about guns being inherently criminal here:

“…whether the availability of guns is the reason for the surge in gun violence was a point of debate.”

By the year 2000, the media uses intangibles affecting one another. Here they blame ‘drugs’ in the abstract, never drug users or drug dealers, to say that they resulted in ‘gun violence’ which then abstractly affected the public zeitgeist.

To test this theory we could go put some crack on the street and wait for it to buy some guns and then as soon as the crack bought the guns, it would immediately take aim at all the local children, shoot them, and collectively make the public upset at the situation. Everything is depersonalized, everything is removed from context and individual choices.

The crack epidemic made a highly addictive substance easily available among populations that were willing to use violence in order to get more of it. Crack addicts got guns illegally, and then did whatever it took to get more. The public was repulsed by the many crime victims, deaths and murders, as well as the destruction of many cities as a result.

“By 1987, as crack fueled a surge in gun violence, public sentiment began to shift in favor of stricter gun control…”

And instead of addressing any realistic causation, the phrase is continually used to depersonalize and collectivize the violence. Violence just happens because there are too many guns according to the media’s linguistic contortions.

Headline: “Report: Gun violence surges in Detroit in first half of 2004”

“In response to the surge in gun violence, [Detroit Police Chief Ella] Bully-Cummings has created a bureau to investigate shootings and homicides.”

The headline as used for another country, Canada, helps further illustrate how silly this is: Canada sits back on its couch and struggles whom to point the blame at: guns, gun owners, or gun manufacturers.

“Canadians are far from unanimous on where the blame lies for the recent surge in gun violence.”

The way something is discussed affects how something is understood. Here you can see the Philly Inquirer in 2006 address the growth of gun violence as a crisis to be met by more police. Apparently the police are sent out to detect signs of “gun violence surging” so that the evil tide of violence can recede.

They’re not told, from the story, to apprehend criminals and to deter crimes committed by criminals.

The administration last detailed a new approach to tackle the surge in gun violence in August. At that time, Street announced that 700 police officers would be shifted to a new bureau in the Police Department that would focus on violence and crime control and be led by Deputy Police Commissioner

Here’s the Boston Globe in 2006 talking about law enforcement ‘initiatives’ to stop the ‘surge in gun violence’ – policies are meant to combat abstractions. We are going to focus on ‘programs’ in order to fight bad vibes. There’s no specificity, no precision, nothing of meaning, nothing of context. It communalizes crime, and makes the response so broad and vague as to be meaningless.

The program here is a specific court to handle gun violence, which won’t necessarily stop crime, it will just legally clean up the mess and punish offenders. In a story about the judiciary and gun crimes, you would think they would make that connection: that perhaps taking the criminals who utilize guns off the street, they will reduce crime by keeping those people from reoffending.

“The court, which debuted Feb. 21, is one of several new initiatives being tried by law enforcement and city officials to stem a worrying surge in gun violence.”

The anti-gun politicians repeatedly use this framing as a way to justify their policies, no matter how nonsensical or illogical they are. Guns cause gun violence so we have to reduce the number of guns, is the only thing they allow themselves to consider.

Headline: “How to curb gun violence in the state?”

“This summer we have seen a tragic surge in gun violence across upstate New York, especially in Rochester.”

There’s plenty of available evidence to show that there is no neat relationship between the possession of guns and gun violence. There is also easy ways to separate lawful gun owners, who often apply for and possess a concealed carry license, from the criminal element who is typically involved in drug trafficking. Unsurprisingly, concealed carry owners commit statistically insignificant numbers of gun crimes, even though they are owners and often always in possession of a weapon.

Readers never get to see that distinction, because of a media narrative that treats all gun violence as an ocean that happens to rise and fall.