The Biden administration’s failure to prepare for the “worst case scenario” led to the chaotic final days of the war in Afghanistan, the former deputy commanding general who oversaw the withdrawal of U.S. forces from Iraq told the Daily Caller News Foundation.

“You plan for the worst case and the worst case would never be to evacuate people out of Hamid Karzai airport,” former Lt. Gen. Thomas Spoehr, current director of Heritage Foundation’s Center for National Defense, told the DCNF. “You would take … your base most able to be protected and evacuate from there.”

Spoehr described the Iraq withdrawal, which had a deadline of Dec. 31, 2011, as “heavily scripted, heavily planned,” and “orderly.” He said the Afghanistan withdrawal, on the other hand, was a “kind of Helter Skelter, get out before they get you kind of thing.”

The U.S. also had “a lot of combat power” in Iraq at the end of the withdrawal, Spoehr said. “I call it like a porcupine … no one wanted to mess with the U.S. on their way out because they were going to get hammered.” (RELATED: ‘ISIS Will Have An Opportunity To Grow’: Gen. Jack Keane Says Leaving Taliban In Control of Afghanistan ‘Looms Heavy’ Over 9/11 Anniversary)

Evacuation efforts were more organized in Iraq, Spoehr said. “We were down to the individual name and I think, as far as I know, we had left just one person in a jail and that person I got word had gotten successfully freed.”

The Afghanistan withdrawal was the opposite, where “hundreds of U.S. citizens, untold number of Afghans left behind … and in most cases you get the sense we have even no idea of some of their names,” he said.

A US Air Force aircraft takes off from the airport in Kabul on August 30, 2021. (Photo by AAMIR QURESHI/AFP via Getty Images)

The biggest mistake, Spoehr said, was thinking the Afghan army would be able to put up a fight against the Taliban. “They should have revised that and started thinking about what is the worst thing that could happen?”

He added that it was “ironic” current Secretary of Defense Lloyd Austin, who Spoehr reported to during the withdrawal, “had recommended to the administration to keep a stay-behind force of maybe ten thousand, maybe even fifteen thousand people in Iraq.”

“‘We want this withdrawal from Iraq to be something that does justice to all the service of the Americans that served here’” Spoehr recalled Austin saying.

U.S. forces had the advantage of land routes out of Iraq, as opposed to Afghanistan, where practically everything had to leave by air, Spoehr told the DCNF.

“We could get out to Kuwait. We could get out to Jordan. And so we had that going for us as well,” he said. “And we had also had lots of support coming up to us from Kuwait. So the units in Kuwait would send trucks up and come get our stuff, which again, a huge advantage over the situation we faced in Afghanistan.”

The Iraqi forces were also “capable” and “numerous,” in contrast to the Afghan army. “Most all of the equipment that was captured there was already in the hands of the Afghan army. They essentially either dropped it or surrendered it,” Spoehr said.

U.S. troops conducted “deliberate cost-benefit analysis” when determining what equipment to leave in Iraq, Spoehr said. Reuters reported the Taliban is in possession 2,000 armored vehicles and up to 40 aircrafts left behind by the U.S. (RELATED: 21 More American Citizens Transported Out Of Afghanistan)

“We looked at the shipping cost of what would it take to ship this back to the United States,” Spoehr said describing the process in Iraq. “And if that didn’t make sense for the American taxpayer, you know, we left it in Iraq and signed it over to the Iraqis.” 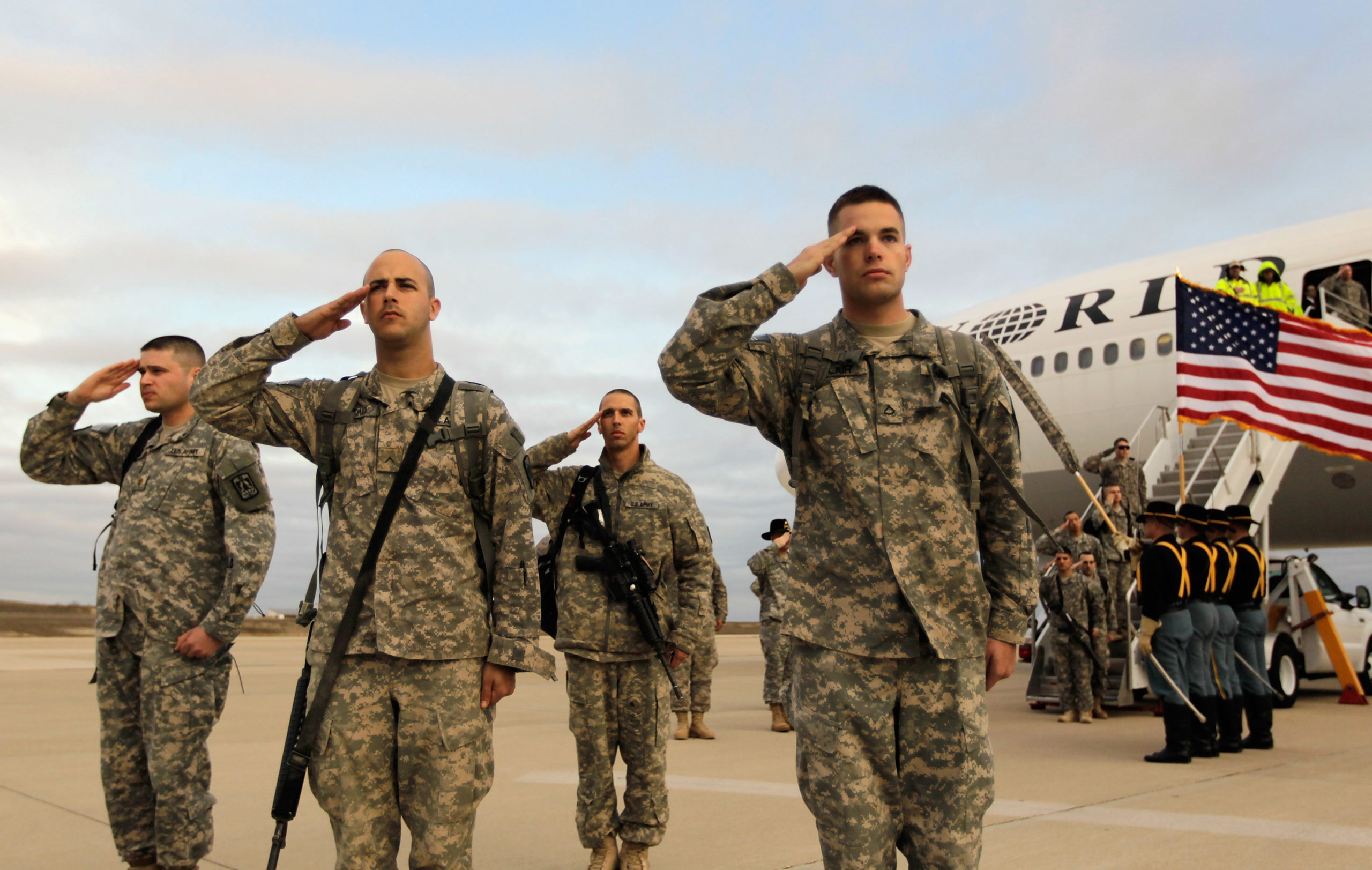 U.S. Army soldiers from the 2-82 Field Artillery, 3rd Brigade, 1st Cavalry Division, salute after walking off the plane as they arrive at their home base of Fort Hood, Texas after being part of one of the last American combat units to exit from Iraq on December 16, 2011 in Fort Hood, Texas. (Photo by Joe Raedle/Getty Images)

Then-President Barack Obama eventually had to send troops back into Iraq after the withdrawal due to the rise of ISIS.

The two withdrawals were different because the Taliban was already a sizeable threat when the U.S. left, Mick Mulroy, former deputy assistant secretary of defense for the Middle East and non-resident senior fellow at the Middle East Institute, told the DCNF.

“The ISIS problem emerged and then kind of was allowed to rebuild in our vacuum, whereas the Taliban was already substantial as we elected to interact, which was basically a concession,” Mulroy said. He expects the U.S. will be forced to return to Afghanistan in some shape or form, as does Spoehr.

“We’ll be back with at least Special Forces to conduct counter-terrorism operations. And I hope it doesn’t happen, but I mean we may have to go in bigger if terrorism really takes a fundamental hold back in that country,” Spoehr told the DCNF.

Mulroy blamed both the Trump and Biden administrations for the botched withdrawal.

He praised the “herculean effort” by the U.S. military during the evacuation, but said it should not have been necessary.

Content created by The Daily Caller News Foundation is available without charge to any eligible news publisher that can provide a large audience. For licensing opportunities of our original content, please contact licensing@dailycallernewsfoundation.org.