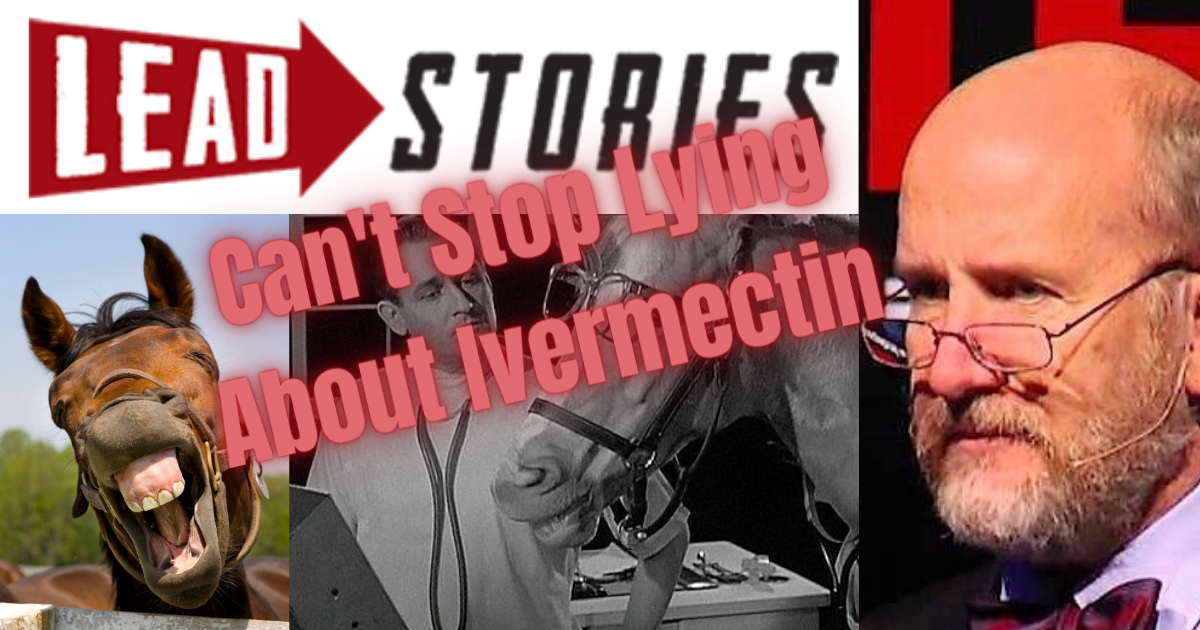 The left-wing disinformation machine decided during the onset of the COVID epidemic that cheap, plain, common treatments for the viral pandemic were impossible. The party line became clear and every member of the mainstream media snapped into line.

Since then, any potential that hydroxychloroquine works has been aggressively challenged and ‘debunked.’ The chance that other treatments are effective is fought at every turn. [1] The common drug Ivermectin fell victim to this odd politicization of medicine, to the point where pharmacists have refused to fill doctor-prescribed human Ivermectin and entire healthcare chains have refused to fill orders in violation of a variety of laws and healthcare ethics standards. [2]

Part of this disinformation jihad was continually repeating the ‘horse dewormer’ line. You can see that in Lead Stories’ disingenuous headline. This is a major mischaracterization. Even left-wing Politifact pointed out that this mischaracterization of Ivermectin is wrong and dishonest. [3]

There are ongoing concerns among the mainstream media about whether Ivermectin is effective. [4] These concerns have largely been answered by practitioners and others who note that there are few, if any, side effects to human Ivermectin at the proper doses, and there are many positive success stories.

A group called “America’s Frontline Doctors” [5] provides practitioner analysis and the science behind the benefits of Ivermectin. As well, they provide doctor referrals for those seeking alternative treatments for COVID.

The mainstream treatments for COVID have largely been ineffective and wrong, such as the 2020 media hype about ventilators. Ventilators were later found to cause even worse outcomes for COVID patients, [6][7] but the media held no one accountable for the mistakes and simply swept the issue under the rug. The media then made masking [8] and state shutdowns [9] the preferred elite option for dealing with the pandemic, even though those strategies also were colossal failures.

They were ineffective measures that came with an enormous economic cost that may take a generation to recover from. [10]

So it would be a real joke if Ivermectin, all along, could have solved this crisis. The stratospheric left-wing arrogance about managing this pandemic crisis would be forever spotlighted if a cheap horse dewormer could have solved it for most COVID cases.

The purported side-effects from Ivermectin was all fake news. Even the left now admits the media’s hysteria about Ivermectin overdoses was a false left-wing disinformation campaign. [11]

Let’s make sure that lines up with the key statement by Lead Stories’ Dean Miller:

Has ivermectin been proven a safe and life-saving treatment for COVID-19? No, that’s not true: The manufacturer of the drug, Merck, says its scientists find no evidence ivermectin works as a COVID-19 treatment and are concerned by the lack of safety data in studies of human use of it.

Miller says Ivermectin is definitively not safe and not proven, but then qualifies that by saying Merck scientists have ‘found no evidence’ to that effect. Then he weasels and says that Merck is ‘concerned’ about the ‘lack of safety data’.

It’s fine to say that there’s room for more research, or that the science is not settled on a question, but Miller is saying that it is settled and then saying it’s not. It’s dishonest doublespeak.

There’s a major difference between definitively saying something is not safe and not proven, and saying there’s no evidence either way. One is definite, the other is ambiguous. In one sentence, Miller is making this major mischaracterization.

There is zero evidence Ivermectin is seriously “unsafe” or substantially dangerous.

In desperation, many afflicted with COVID have resorted to the veterinary Ivermectin, meant for horses, goats, and others. Doing so, they have measured the dosage incorrectly and overdosed, needing medical attention. These unprescribed doses, re-measured for humans when they were meant for horses, are too strong for humans.

The side effects to Ivermectin are amazingly mild. [13] It’s rightly called by many as a “wonder drug.” [14] Even at an overdose of the drug, the side effects are almost never fatal, though they could be serious at a high-enough dose. [15]

If you notice, the media almost never qualifies what an overdose of this drug looks like. They just call it ‘dangerous’ with no further explanation. This is an important tell that they want to demonize this drug without giving proper and necessary missing context.

Miller does quote to a page from the FDA that says thusly:

You can also overdose on ivermectin, which can cause nausea, vomiting, diarrhea, hypotension (low blood pressure), allergic reactions (itching and hives), dizziness, ataxia (problems with balance), seizures, coma and even death.

That’s a pretty powerful excerpt, but is it true?

The media focused on two deaths in New Mexico supposedly tied to Ivermectin. [16] The two dead, if one reads the articles, are said to have had Ivermectin ‘contribute to their death.’ That’s a far cry from causing their death.

And it’s not surprising that people who were desperate enough to try alternative medicine to treat their potentially-fatal viral infection would still end up dead.

The New York Times cites to 1,440 total cases of Ivermectin overdoses across the country. [17][18] But again, overdosing most likely looks like nausea, fatigue, body aches. And for comparison, there are 3,515 cases of adolescents who overdose just on ibuprofen in the average year in America. [19]

So is Ivermectin reasonably considered ‘deadly’? No. Dean Miller is lying about Ivermectin’s riskiness.

The question of whether Ivermectin is effective is another question altogether, and a lot more nuanced.

The fairest mainstream answer at this point is to say that Ivermectin’s effectiveness is not proven.

Dean Miller dances all over the place with different statements to this basic question. Let’s review his schizophrenic and disjointed statements:

“Has ivermectin been proven a safe and life-saving treatment for COVID-19? No, that’s not true”

“no evidence ivermectin works as a COVID-19 treatment”

“Ivermectin maker says it does not work for COVID”

Miller quotes to a response from a Merck spokesperson that is a little more nuanced, here is what Miller quotes Merck as saying:

“continue to engage with the external scientific community regarding ongoing research”

Yep, this is where Dean Miller debunks himself. He’s that much of a moron.

Question: Can something have “no evidence” and still be “examining the findings” from that evidence?

Question: Is it fair to say that something “does not work” when there is “ongoing research”?

Question: Is it true that something has “no evidence” and “does not work” when “existing data [is] inconclusive”?

This is the game where in three sentences you realize Dean Miller is a chronic liar and a journalistic fraud.

These are chronic misstatements, mischaracterizations, and lies about the effectiveness of Ivermectin.

There are many who claim Ivermectin is effective, and many who express doubt about the existing studies and urge more study before it is put into wide use. Those are two defensible positions. But those two positions, both supported by evidence and logic, are not Dean Miller’s position.

Instead, Dean Miller takes the entirely unsupported position that Ivermectin is proven not to work. That’s just a lie and he knows it.

If you read Lead Stories for journalism, you’ll need more than Ivermectin to fix what’s wrong with you.