[Editor’s note: Among the most important points made by Hal Turner occur in his commentary toward the end, specifically:

Ukraine is using Western-supplied weapons to attack a nuclear power plant inside their own country . . . and the West says that if there’s a radiation leak from the plant, “that will automatically Trigger NATO Article 5 collective self defense.”

Ukraine is not a member of NATO.

Worse, it is Ukraine attacking the nuclear power plant.

Does NATO plan on invoking Article 5 to attack itself . . . because if a radiation leak happens, it is 99% the fault of the US/NATO!  They’re supplying Ukraine with the weapons being used to target the nuclear power plant!

Nuclear war with Russia seems to now be a deliberate, planned, action by the West, and this weekend, elected members of the two most influential western governments tipped their hand.  With what they said, nuclear war may be only DAYS away.

As most readers are aware, much has been made of the Zaporozyhe Nuclear Power Plant in Ukraine.  That plant was taken over by Russia very early in their Special Military Operation (SMO) to de-militarize and de-Nazify Ukraine.

The reason Russia took control of the plant early is that if there is any kind of radiation leak from that plant, local prevailing winds would not only create a deadly threat to Russian troops operating in Ukraine, the winds could also carry radiation into Russia.  As one might expect, Russia does NOT want either of these occurrences.

So Russia, being a superpower against whom Ukraine stands no chance at all of prevailing, took control of the plant, continued allowing Ukrainian experts to run the plant, and all was well . . . until about two weeks ago.

About two weeks ago, Ukraine began firing artillery shells toward the plant.  Ukraine claims that Russia has troops in the plant, and those troops are allegedly carrying out attacks against Ukraine.

Russia denied carrying out any attacks from the plant and demanded that Ukraine cease firing artillery at the plant.   Ukraine has NOT stopped.

More recently, Ukraine has now begun publicly claiming it is RUSSIA, firing at its own people in that plant, to “create a false flag excuse to use Tactical nukes against Ukraine.”

Russia raised this issue with the UN Security Council, and Russia asked the International Atomic Energy Agency (IAEA) to come to the plant immediately to see for itself who is actually firing against the plant.

The Hal Turner Radio Show has been warning the public for almost two weeks that if Ukraine hits a sensitive area of the plant, it could cause a Reactor meltdown and explosion, sending plumes of radiation into the atmosphere into Europe, creating an utter catastrophe.  We also reported that prevailing winds would carry the radiation to the United States within about ten days, and cover the entire country about four days later.

We even published a scientific model showing where local prevailing winds would carry the radiation WITHIN EUROPE if a leak was to take place between August 11-15, 2022.   That model appears below: 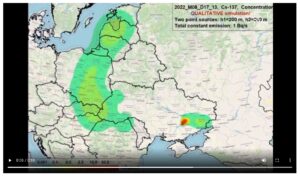 The lack of response by the UN Security Council, and lackadaisical attitude of the IAEA is confounding . . . it makes no sense to any rational, thinking person . . . . unless . . . . it is deliberate.

Now, we seem to have our answer.

Tobias Ellwood, MP British Parliament, said Friday night that “any deliberate damage to the Ukrainian nuclear reactor with a possible radiation leak would be a violation of NATO Article 5.”

A similar statement was made by Adam Kinzinger,  member US House of Representatives. In his view, a radiation leak that “will kill people in NATO countries” will automatically trigger Article 5 of the Alliance’s charter.

Now you know why, just a month ago, on July 11, New York City Office of Emergency Management (OEM) issued a Public Service Announcement teaching New York City residents “What to do if a nuclear bomb detonated in the city” (Story and PSA Video, HERE)

Now you also know why, also a month ago, the US Department of Homeland Security began distributing large posters in shopping malls around New Jersey, warning shoppers of what to do in “A Radiation Emergency”  (Story Here)

It’s because they have planned this outcome all along.

And right this minute, as YOU read this article, all it’s going to take to kick this whole thing off, is some Ukrainian Nazi, firing an artillery shell into the right spot at that plant, and everything from that moment on is on autopilot.  The artillery blast hits and causes a leak, NATO blames Russia and invokes Article 5, Russia is then facing an “existential threat” and unleashes its nukes.  NATO returns nuke fire.   Each side goes all-in.

There won’t be any way to control or to stop everything because NATO WILL NOT stop and Russia, facing a threat to its very existence, CANNOT stop.

Every step taken by the US and its vasal NATO “partners” has been specifically designed to escalate the fighting between Ukraine and Russia, and create an excuse for NATO to enter that situation.

Now, Ukraine is using Western-supplied weapons to attack a nuclear power plant inside their own country . . . and the West says that if there’s a radiation leak from the plant, “that will automatically Trigger NATO Article 5 collective self defense.”

Ukraine is not a member of NATO.

Worse, it is Ukraine attacking the nuclear power plant.

Does NATO plan on invoking Article 5 to attack itself . . . because if a radiation leak happens, it is 99% the fault of the US/NATO!  They’re supplying Ukraine with the weapons being used to target the nuclear power plant!

Of course, even the most brain-dead reader can see that NATO won’t be attacking itself, they will use a radiation leak . . . that THEY FACILITATED . . . as an excuse to go to war against Russia.

This is massive fraud by the west . . . and it is literally suicidal.

Russia made clear from the start of its SMO that “if any outside countries interfered, they would suffer consequences like never seen before in history.”

Russia made very plain what it meant:  “Russian conventional forces do not compare with NATO conventional forces; we know that” said Russian President Vladimir Putin.  “But Russia is also a nuclear power.  And out ability is superior to NATO.   If NATO invokes Article 5 against Russia, it will be a war that no one will win.” Putin continued.

As most common people know from childhood, the only “war that no one will win” is a nuclear war.

Russia laid its chips on the table back in February when it began its SMO in Ukraine.  They warned everyone not to interfere.

From the very start, the US and NATO have done everything they can to interfere, escalate the fighting, and harm Russia.

Now, the US/NATO is telling Ukraine to fire artillery shells at the Zaporozyhe Nuclear Power Plant, clearly with the intention of CAUSING a radiation leak, that the US and NATO can use as an excuse to invoke Article 5 of the NATO Treaty, and go to war with Russia.

And the moment that Article 5 is invoked, Russia has already told us “it will be a war that no one will win.”

The plan is plain as day.  The pieces are in place.

It is now absolutely clear to me that the United States federal government is literally out of its mind, and actually trying to start World War 3, which they already know, will be a nuclear war.