Grave and terrifying warnings about launching more satellites into space are nothing new (see 1, 2).  Nevertheless,  the Federal Communications Commission (FCC) is providing hundreds of millions of taxpayer dollars for satellites to be launched for broadband.

High speed internet is achievable, safer and more secure with a wired internet connection (see 1, 2) – not 5G or WiFi.  Americans have paid to have this already (see 1, 2, 3, 4, 5).  U.S. opposition to 5G continues to increase for a variety of reasons in addition to health and environmental risks (see 1, 2, 3, 4, 5, 6, 7).  Federal agencies and credible experts have warned that it threatens aviation safety, jobs, national security, public safety, and weather forecasting accuracy (see 1, 2, 3).  Recently, the Government Accountability Office acknowledged serious challenges with 5G deployment as well.

Thanks to international attorney, Julian Gresser, for writing a declaration to halt the FCC Satellite Program.  From Environmental Health Trust: 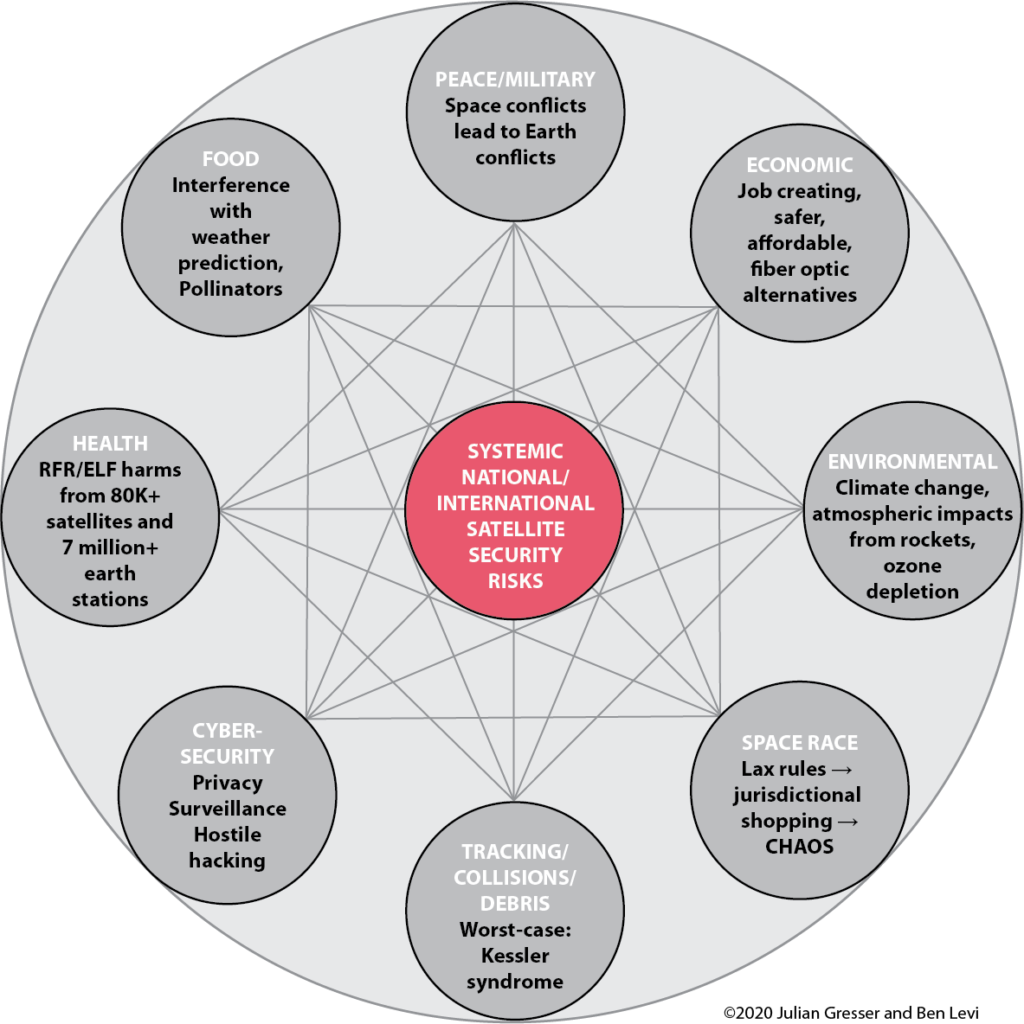 Please consider signing the Healthy Heavens Trust Declaration written by International attorney, Julian Gresser. The legal team from Healthy Heavens Trust is seeking to gather signatories from well-established organizations and individuals that support the message. The Declaration will become part of the Expedited/Emergency Petition for Rulemaking being submitted to the Federal Communications Commission (FCC) regarding their permissive regulatory vacuum on the Satellite Licensing Program.To read the Declaration, watch a short explanatory video interview of Julian Gresser, and to sign the Declaration as an organization and/or individual, go to https://www.5g-ilan.com. Please also read the following short summary by Julian of the FCC Petition for Emergency/Expedited Rulemaking.

The legal proposition to be tested in the Petition for Emergency/Expedited Rulemaking, and in the subsequent judicial appeal, is whether five FCC Commissioners acting arbitrarily and capriciously can legally approve blanket licenses for 80,000+ low orbit, non-stationary satellites and millions of earth stations, for the benefit of a few powerful satellite companies — in flagrant disregard of international and federal law, and the national and international security risks — and to do so without any requirement that the satellite companies indemnify the U.S. government or the international public, or provide reasonable insurance covering the increasingly likely harms.The Petition proposes new rules and procedures to restore Balance. It requires, before any further licensing, comprehensive and systematic assessment of eight domains of national and international security risks, illustrated above. It reaffirms that NASA, other U.S. government agencies and several Congressional committees have already recognized some of these risks as critical to the national interest, yet the FCC is consistently ignoring them in its piecemeal licensing program. It requires the FCC to develop new rules and procedures based on this systematic risk assessment through a collaborative consultative process with other federal and state agencies, international organizations, and national governments, and to hold regular and timely hearings to ensure informed public consent. No such effective consultation has happened to date. There is a permissive regulatory vacuum.

In demanding a moratorium on all new licenses, the Petition for Emergency/Expedited Rulemaking will reaffirm a deep principle embraced by most indigenous peoples and many nations: that the Heavens, our planet’s last precious frontier, are not a commodity to be bought and sold and degraded for private commercial gain; but rather, they are Sacred and held in public trust; and we stewards here on planet Earth, are legally and ethically responsible for their wise and careful exploration.

Although satellites threaten many areas of our lives, this Declaration highlights collisions, debris, and cybersecurity risks, areas where other U.S. government agencies have already warned of an immediate threat to national and international security, and yet the FCC has no plan in place to address these risks. or to require satellite companies to mitigate them as a pre-condition of licensing.

As we know all too well, the launchings are being approved at breakneck speed, and so this action is time sensitive. We ask that organizations and individuals wishing to sign on in support of the Declaration do so as soon as possible.

Again, the Declaration, Explanatory Video, and signing can be found here.

We hope you will sign and share widely with other 5G/EMF collaboratives, environmental organizations, and all groups and individuals working to safeguard our future.

To read the Declaration, watch a short explanatory video interview of Julian Gresser, and to sign the Declaration as an organization and/or individual, go to https://www.5g-ilan.com.

Since 2017, doctors and scientists have asked for 5G moratoriums on Earth and in space due to health and environmental risks (see 1, 2).  Since 2018 there have been reports of people and animals experiencing symptoms and illnesses after 5G was installed (see 1, 2, 3, 4).  In 2019, telecom executives gave U.S. congressional testimony that they had NO independent scientific evidence that 5G is safe.  Research has determined that it’s not.  Cities AND entire countries have taken action to ban, delay, halt, and limit 5G  installation AS WELL AS issue moratoriums on deployment.

The majority of scientists worldwide oppose deployment.  Of course exposure risks ARE NOT exclusive to 5G.  Last year, the World Health Organization warned that high levels of Electromagnetic Fields (aka “Electrosmog”) could cause health issues in a significant percentage of the population.  Nevertheless, in August, Trump reintroduced his proposal to have a nationalized 5G plan and the Department of Defense (DoD) wants to own and operate it with Google.  American legislators and organizations have also voiced opposition to this arrangement.

If you are opposed to 5G, be sure to also sign this petition asking President-elect Biden and Vice President-elect Harris to stop deployment and instead provide safe high-speed internet to Americans.