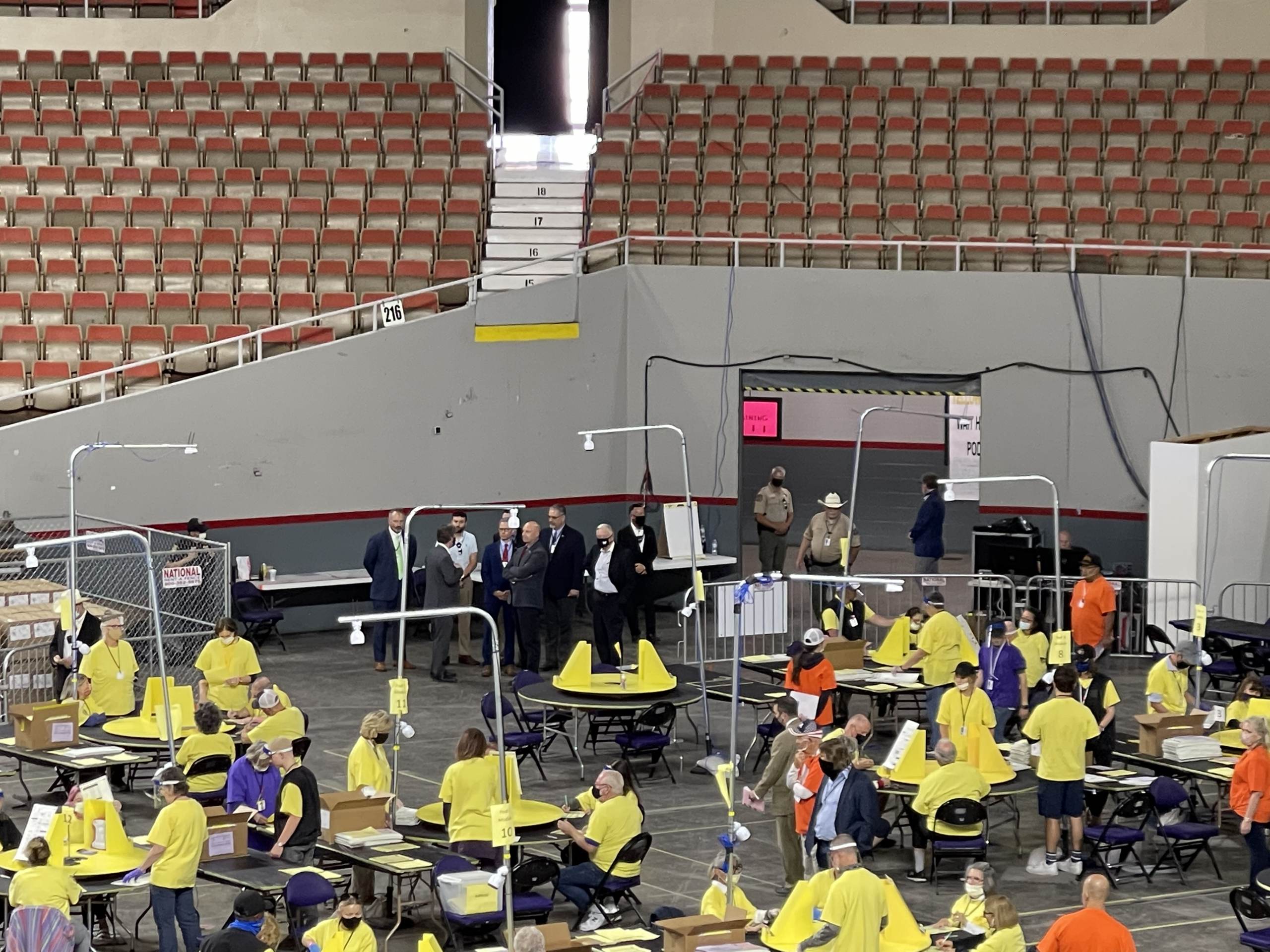 On Wednesday, a Pennsylvania delegation was escorted into the Veterans Memorial Coliseum in Arizona for an on-the-scene tour of the audit facility.

The team from PA, consisted of State Senator Doug Mastriano, State Senator Cris Dush, and State Rep. Rob Kauffman and their staff.  The group received a briefing from Arizona legislators in the morning. They then took a tour of the entire audit facility, as we reported earlier today.

Jordan Conradson: Can you give me a quick step-by-step of what you and other legislators from Pennsylvania did today?

Senator Doug Mastriano: Myself, Sen. Cris Dush, and Rep. Rob Kauffman met with our counterparts in The House and Senate today. They gave us the legislative perspective on this audit: why they’re doing it and how they got here. Then after that, we got a tour of the audit and they went through the process of how they protect people’s privacy, how they ensure chain of custody and how this is a free and transparent process. I gotta tell you: I’m Impressed. This is a model for any audit in any nation or the world.

Conradson: Tell me more, what do you think about the process?

Mastriano: My impression of this right here is, this is the way you do it. They’re looking at the type of paper that’s being used, they’re looking at whether circles were filled in by a machine or by hand. This is the level of technology that we should have. The takeaway for Pennsylvania and the rest of the nation is that our elections need to be secure. People should be able to walk into the ballot box thinking “my vote counted, my voice was heard”. If we got nothing to hide, Let’s do this.

Conradson: I know you already said this but I want to hear it again. is this process secure?

Mastriano: This process is VERY secure…

Conradson: Do you plan to replicate this process in Pennsylvania?

Mastriano: Yeah, if we do an audit in Pennsylvania. We need to do an audit and this is the model. I don’t know why in 2021, this is not more commonplace, where if people have issues they can have their answers. It’s about finding out who won, who got the most votes and that’s it. Additionally in the military, we got what’s called after-action review.  We conducted an election, what went right, what went wrong, and what are we going to do to fix it?

Conradson: What do you say to mainstream media and Democratic claims that this is a “Fraudit”?

Mastriano: I am just stupefied by the lack of intellectual curiosity being exercised by the media and the left. They should be the first to do an investigative approach to an election… This audit is so secure, transparent, and organized that other states want to duplicate the process.

Which state will be touring the audit next?