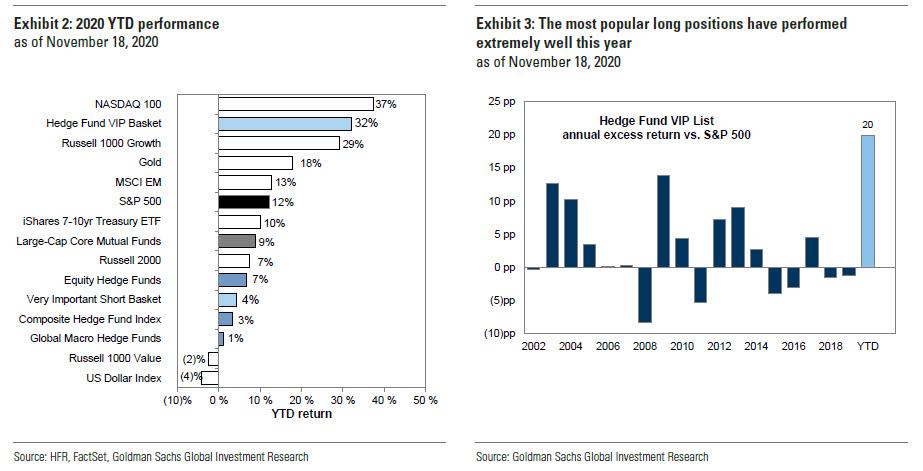 Earlier today we showed that according to Goldman prime, hedge funds have never been more long stocks, on both a gross and net basis.

But what are they long?

The tautological answer is “the basket of Hedge Fund VIP stocks”, which is the 50 or so names that most hedge funds have gravitated toward, and which as noted earlier, managed to outperform remarkably in Q3.

The only problem: the basket of most popular hedge fund shorts ripped even higher in 2020…

… which is why this has been another year in which hedge funds have failed to outperform the S&P500.

Looking closer at this VIP basket reveals that it is nothing more than a handful of momentum/tech names that trade with near record equity duration, which is why they are so sensitive to even the faintest gust of reflation as we saw last Monday when the momentum factor suffered a 15 sigma collapse.

This is how Goldman explains the recent turmoil within this “most popular” group of stocks:

Recent vaccine developments have generated a major shift in equity market momentum and also a stumbling block for hedge fund alpha. Following PFE’s announcement of vaccine efficacy on November 9, our S&P 500 Momentum factor experienced its largest single-day decline in its 40-year history. The factor declined again earlier this week following the release of MRNA’s vaccine efficacy results. As momentum reversed, our Hedge Fund VIP List of the most popular long positions also lagged. In recent months, both the Momentum factor and the excess returns of our Hedge Fund VIP list of popular long positions have been negatively correlated with vaccine news.

Why such dramatic moves? Because as Goldman observes, the most popular hedge fund longs “have recently traded with a record sensitivity to interest rates, reflecting the risk posed to high valuation growth stocks from an economic recovery.” Or, as noted above, the highest momentum stocks, growth stocks, and Hedge Fund VIPs all have high equity duration, which reflects the market’s view of the contribution of long-term growth to present value, and is also why the only thing that can crash this market is a return of inflation which would unleash a liquidation wave among these companies.

Why is this important? Because equity duration for stock valuation multiples has historically been tied to the level of interest rates, helping explain the momentum reversal and underperformance of Hedge Fund VIPs as vaccine announcements led to a jump in Treasury yields. It also explains why the valuation premium of the most popular hedge fund stocks is absolutely insane, and the highest in history: according to Goldman “our Hedge Fund VIP basket currently trades with a two-year forward P/E multiple of 25x, a nearly 30% premium to the S&P 500 multiple of 19x.”

Translation: even a hint of (reflationary) economic recovery will instantly crash the market as its leaders see their PEs collapse.

Perhaps realizing that they are facing potentially terminal losses once inflation returns, Goldman notes that while funds remain tilted toward high momentum growth stocks, “that position has moderated in the last few months, reducing the risk to returns from further progress on the path to pandemic recovery.” To wit, during 3Q, hedge funds slightly increased their long positions in Cyclicals relative to Defensives and reduced their tilts toward Growth and away from Value. For example, at the sector level, funds increased positions in Financials in 3Q, continuing a rotation that began in 2Q. Hedge fund concentration and crowding has also declined in recent months.

And while all that may be true, it is really just a small change on the margin – the reality is that hedge fund exposure to tech remains unprecedented. Focusing on just those, Goldman writes that “among the market-leading mega-cap growth stocks, hedge funds increased ownership of MSFT, FB, and GOOGL but reduced positions in AAPL and AMZN.” And, since they are always wrong when acting as a collective, funds reduced ownership of TSLA… just as the stock exploded to new all time highs after it was slated to be added to the S&P 500 on December 21. Remarkably, TSLA also fell out of our Hedge Fund VIP basket this quarter – when hedge funds should have been doubling down on it.

So with all that in mind, we go back to the original question: what are the 50 most popular stocks among hedge funds? The answer, represented by the Goldman Hedge Fund VIP basket, is shown below. There are no surprise at all, except as noted above, Tesla’s falling out of this list.