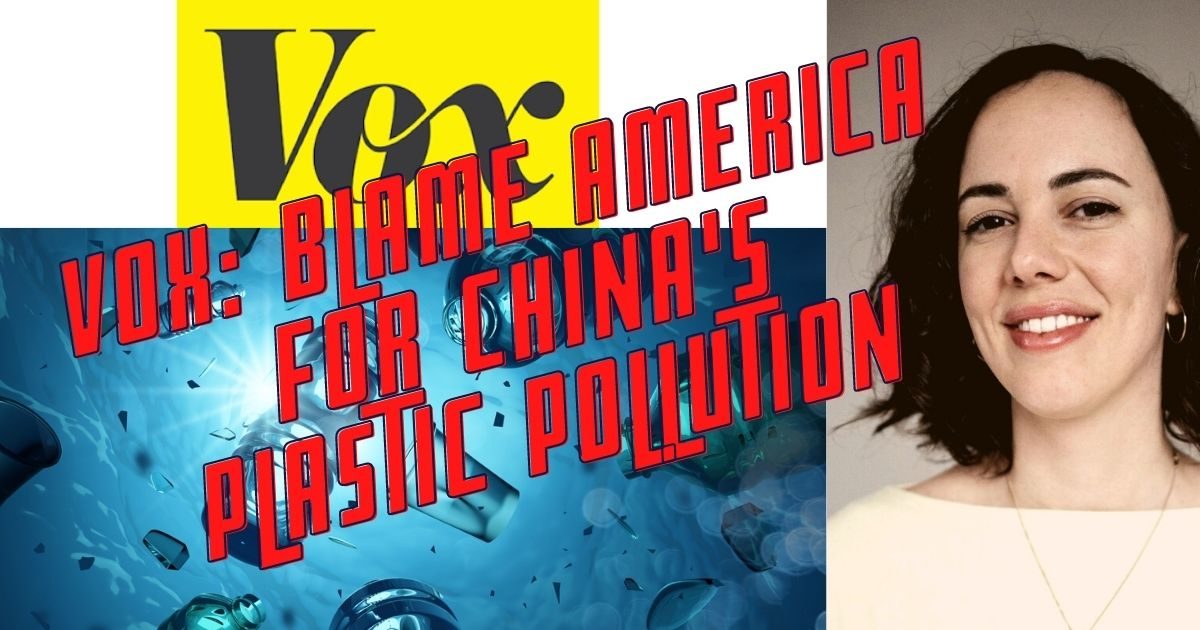 They say Washington is Hollywood for ugly people, which is kind of like Vox, which is ‘journalism’ for stupid people.

A good test of an article is whether you are better informed or less informed after reading an article. This article about plastic pollution from Vox really communicates very little other than to imply that major plastic pollution is the fault of Americans, when the exact opposite is true.

The article gives readers a little bit of information that plastic pollution might be on the top of the sea surface, in the sea sediment, and on the beach, which is precisely one sentence of information for perspective. And if you didn’t know there was plastic pollution at the beach, then you have probably never been to a beach in the first place and possibly don’t know what one is, so it’s again not the greatest journalism in the world or even in a three block radius of Vox’s headquarters.

The oddest thing about the article is the constant collective guilt it tries to impose in its readers however. The video makes several suggestions that the plastic is America’s fault and responsibility to fix.

For starters, the great plastic patch is situated between Hawaii and California. Secondly, they keep using this way of referencing the problem that is collective in nature, meant to instill collective guilt.

Read the following from Vox and take note at these specific phrases:

“…the plastic we consume…”

“…what we put into the ocean.”

Starting in the 1990s, the world’s attention began turning to the specter of ocean garbage patches — heaps of plastic and other debris that accumulate in distinct areas of the ocean, thanks to currents known as gyres. These patches came to symbolize our global addiction to plastic production and consumption.

A lot of the plastic we consume ends up in the ocean due to man-made causes, such as poor waste management practices. Some of it ends up there because of natural disasters. There’s a lot of Japanese plastic floating in the Great Pacific Garbage Patch, for example, due to the 2011 tsunami. Japan is a country that otherwise has above-average waste management policies.

All of this plastic consumption — and the world’s inadequacy at containing it — means an estimated 8 million metric tons of plastic end up in the ocean every year. It is remarkably difficult to track all of this plastic, but in 2019, a group of researchers affiliated with the Ocean Cleanup published a study about plastic debris in the Great Pacific Garbage Patch. They excavated plastic from it and, using what they found, made a model showing what is likely floating in each of the five (at least) ocean garbage patches around the world. They also estimated that what’s floating on the surface of the water accounts for only 1 percent of what we put into the ocean.

What they are trying to do is to coyly leave the reader with the impression that global blame on this is equal across all countries and people. They want to say without saying that Americans are to blame for the plastic in the ocean and all of the negative environmental consequences that follow.

Yet almost none of the plastic in the oceans is coming from America or American rivers.

Of the 1000 rivers blamed for most of the world’s plastic pollution, the dominant majority of them are in Asia. [1] You might want to give the Vox team some excuse like perhaps this is recent research, but this is actually a broader indictment than just a few years ago when 10 rivers were blamed for 95% of plastic in the ocean. [2]

Here are the ten rivers that are the heaviest polluters: [3][4]

Some of the worst polluting rivers are also in Phillipines. [5] Here’s how Vox, in their video, announces a new expert, Erik van Sebille: This isn’t an accident, this is a style that seeks to make the globe’s pollution problems a guilty complex for Americans who, by and large, do not pollute in the same way. [6]

There’s this strange left-wing meme that seeks to make environmentalism a quasi-religion [7] where one must continually repent for humanity’s sins. This environmental religion seeks self-flagellation in the form of feeling guilty about drinking bottled water, regardless of the fact that American plastic pollution primarily ends up in very efficient, economical, and environmentally-friendly landfills. So it’s also a matter of missing context and misrepresentation on behalf of Vox reporters.

Part of the motivation is likely to avoid criticism of the third world and instead focus all the blame game on the first world. This is what happens in the flawed reporting on CO2 emissions as well, where America gets all the blame and China gets none, because Americans are easier for American reporters to blame without being accused of racism or whatever the left-wing politically correct fad of the week is.

This conclusion, that Americans were not to blame for the plastic crisis, was so unacceptable to the objective scientists that they redid the study to claim that Americans were shipping plastic waste to China who was then releasing it via their rivers. [8]

Actual quote from one of the study authors:

“We were not attempting to re-do the 2015 study,” says Kara Lavender Law, a marine scientist at the Sea Education Association in Woods Hole, Massachusetts, and the new study’s lead author. “The whole point was to examine the United States.”

There is clearly a political motive to spread guilt to Americans, regardless of the evidence.

The only way to get to that conclusion is to examine how much plastic is produced per capita and then measure waste and claim the rest is going into the ocean. It’s sloppy science and sloppy methodology in order to blame America.

The end of the Vox video kind of gets at the point that plastic pollution comes from ‘other countries’ but that we can do our part by cleaning it up wherever we go. But there are many subtle things that still try to reinforce that Americans are to blame:

Imagine if we all had collective guilt from the existence of Vox. Maybe that’s the real lesson here: we need to take ownership for all the media pollution coming from outlets like this, and reporters like Bult. Unless we clean up this kind of trash from our ecosystem, we are going to be stuck with this kind of nasty particulates for decades. I… the royal we, you know, the editorial…