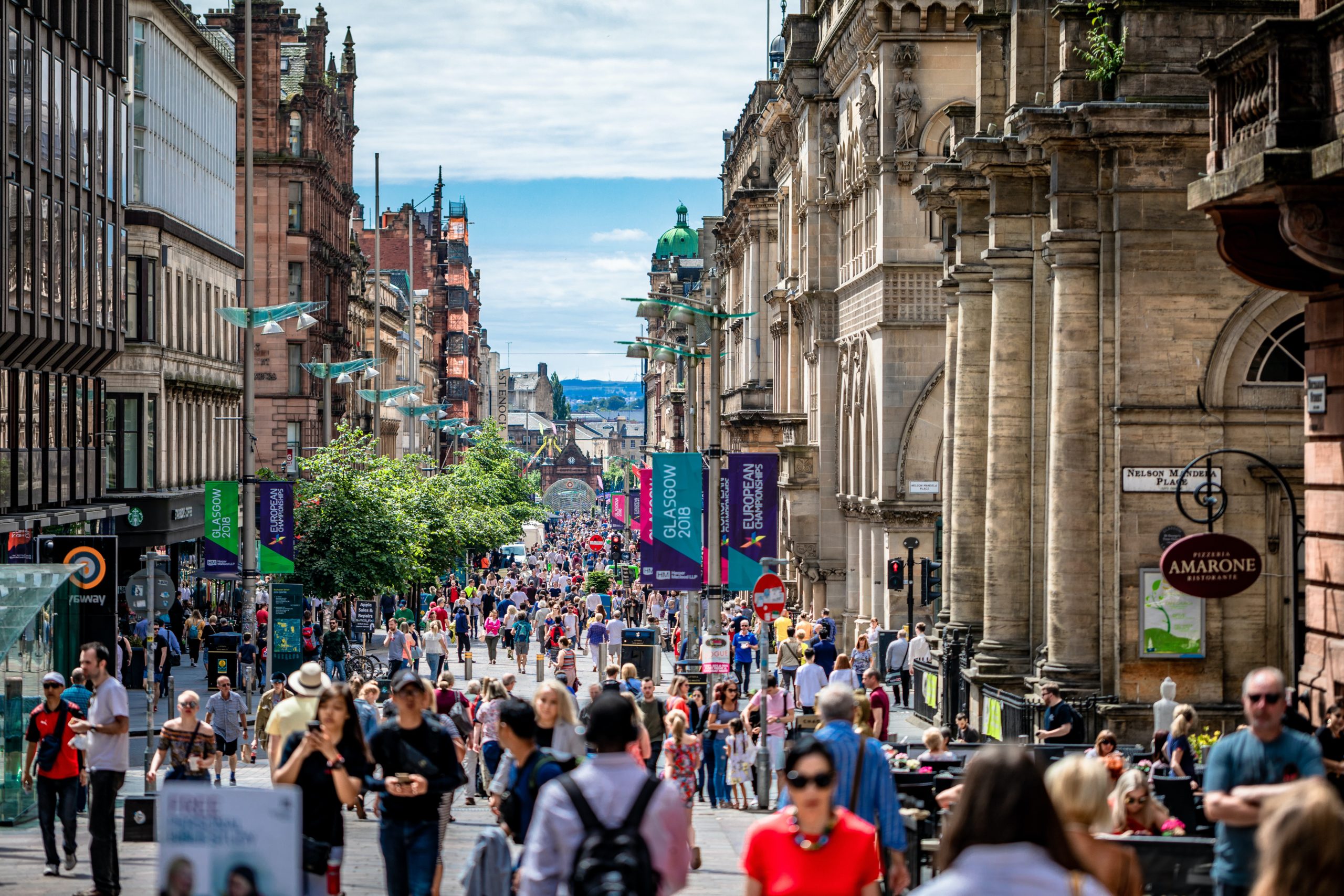 Back on September 24, long after we repeatedly said that any hopes for another major stimulus before the election (and certainly after, absent a Democratic sweep) was nothing but a pipe dream, Goldman – which until that point had predicted that Congress would pass a $1.5-$2 trillion fiscal stimulus “shortly” – threw in the towel and said it’s “base case” no longer anticipates a stimulus before 2021, resulting in a 50% cut to its Q4 GDP forecast, from 6% growth to 3% (as a reminder, on Friday JPM slashed its Q1 2020 GDP estimate to negative 1%, i.e., a double dip recession; we expect Goldman will follow suit).

Well, fast forward two months, when in its latest prediction, the overly optimistic Goldman Sachs has fully capitulated to the political reality, and in a note published on Saturday, its chief political economist Alec Phillips writes that with Congress having recessed for Thanksgiving without progress on fiscal relief measures, “the odds that Congress will pass a major fiscal package before year end” have been further reduced. Instead, Goldman now believes that “a much smaller package of temporary extensions looks more likely” although even that may be overly optimistic in light of the unprecedented polarization that is emerging in Congress, a “return” to fiscal conservatism among republicans (this usually happens any time a Democratic president is in power) and hopes that a covid vaccine may be imminent.

Additionally, according to Goldman, “the longer Congress waits to pass further fiscal measures, the smaller the bill is likely to get” because while increasing virus spread poses near-term risks, by Q1 2021 the outlook for widespread vaccine distribution will restrain the amount of fiscal support Congress will want to provide.

While we find it amusing that we predicted more than three months ago what the top political strategist at Goldman Sachs only now concedes, here are some excerpts from Phillips’ “eureka” moment, why he no longer expects any sizable stimulus:

Additional fiscal support still looks likely but Congress has made virtually no progress since the election. With Congress now on Thanksgiving recess this further reduces the odds that Congress will pass major COVID relief legislation in December. Instead, it looks more likely that Congress will add provisions to the spending bill that Congress is likely to pass to fund the government past Dec. 11, when the current spending authority expires (there is a chance a one-week temporary extension could push the deadline to Dec. 18). This would likely include at least an extension of expanded unemployment benefits, which expire Dec. 26. We estimate that the expansion of eligibility and extended duration of benefits would affect 11-12 million individuals collecting benefits and add slightly more than $13bn/month to benefit spending compared with letting those provisions expire.

However, in a preemptive backtracking, Phillips admits that “even a simple temporary extension of unemployment benefits is far from certain” since Congress failed to extend the $600/week extra benefit that expired in late July which, at the time, seemed likely to be a forcing event for broader fiscal action. Other deadlines, like the end of restrictions on airline furloughs, have also failed to spur action. So while Goldman believes the odds of an extension are fairly good, “there is a risk that Congress fails to extend these provisions.”

The Georgie runoff elections on Jan 5 present another complication. As Goldman notes, “Republican campaign messages have emphasized the benefits of divided government, while Democrats have focused on Republican opposition to a large relief package as a reason to support Democrats in the runoff.” Senate Democratic Whip Durbin recently indicated that Democrats would emphasize Republican opposition to the House Democratic relief package, saying “if they do nothing in the post-election session on COVID relief, that may affect the vote on Jan. 5 in Georgia.”

In assessing the outcome of the Georgia race, Goldman says that if Congress enacts a few short-term extensions in December, this would probably push the broader debate past President-elect Biden’s inauguration on January 20, 2021. For example, Congress might extend the unemployment provisions through February 2021, which would likely allow enough time to work out a broader agreement once the Georgia results are clear and President-elect Biden has taken office. In such a scenario, Goldman expects legislation to become law sometime in February, with provisions taking effect in February or March.

The GA runoffs, which will determine control of the Senate, will also define the amount of total fiscal support, which will also depend on the extent of renewed virus spread, and the outlook for vaccine distribution. According to Phillips, “worse-than-expected virus spread and new restrictions on activity seem likely to lead to a higher total price tag for additional fiscal support, while good news on vaccine development and distribution is likely to limit the amount of additional support.” Separately, while developments in these areas could surprise to the positive or negative in the near-term, the outlook is likely to be on an improving trend over the next several months, as more of the population gets vaccinated. If so, the longer Congress waits to enact broad COVID-relief legislation, the smaller the total amount of additional fiscal support might be.

Covid aside, Senate control remains by far the most important factor in determining the total amount of fiscal support. In the event that Democrats win both Georgia seats on Jan. 5, Goldman expects Congress to pass fiscal measures in the range of $2 trillion (still, “while a “Blue Wave” outcome in which Democrats won a Senate majority with seats to spare might have led to a larger package, a 50-50 Senate with Vice President-Elect Harris casting the tie-breaking vote might restrain the size somewhat.)

As an side, the difference between 49 and 50 Democratic seats in the Senate is critical, for two reasons according to Goldman: First, with 50 seats Democrats would control the Senate agenda and would be able to bring a larger fiscal package to a vote. Second, even if enough Republicans did not support such a package, Democratic leaders could use the reconciliation process to pass most of those measures with only 51 votes (i.e., no Republican support).

In any event, under a divided Congress fiscal stimulus is likely to be much smaller and the size is likely to grow smaller the longer it takes Congress to pass legislation. Under Goldman’s base case that Republicans hold at least 51 seats in 2021 (prediction markets imply a 77% probability of this), Goldman now assumes that Congress would pass fiscal measures totaling $1 trillion (just under 5% of GDP), with most of the spending in 2021.

It gets worse: since by early 2021, it is virtually certain that we will have actionable positive vaccine news, this combined with a likely delay until early 2021 in passing major fiscal legislation, “suggests that the amount is likely to be smaller.”

As a result, Goldman now assumes only $700bn in fiscal measures, in bad news for insolvent state and local governments which had been holding out hope for a $2.2+ trillion stimulus package as Nancy Pelosi demanded in October (Goldman still thinks such a package would still address the same components it had previously expected: unemployment benefit extension, small business support, a limited amount of aid to states (likely through education grants, as in the prior Senate Republican bill), and funds for public health efforts.)

One final point on the Treasury’s recent decision not to extend some emergency Fed facilities: according to Phillips this does not meaningfully change the prospects for stimulus.

Treasury Sec. Mnuchin has called on Congress to reallocate the $455bn in ESF funds that he estimates have not been used by Fed facilities or direct lending programs. Along with $138bn in unspent Paycheck Protection Program (PPP) funds, there are $593bn in “unused” CARES Act funds that congressional Republicans propose to reallocate to other uses. However, these funds are relevant mainly for political purposes. Since none of those funds are expected to be spent for the original purposes, rescinding them would not change projected spending. Congress can reallocate these funds to new programs where they would then be spent – unemployment benefits or a second round of PPP loans, for example—but this would have the exact same budgetary effect as leaving the funds in place and spending “new” money on those programs.

However, the reallocation of these funds might lead Republicans to support a larger package than they had previously. For example, if Republican leaders count the $593Nn in “reallocated” funds against a hypothetical $700bn package, they might announce that their legislation spends only $107bn. This would be true in one very narrow technical sense (a concept known in federal accounting as “budget authority”) but it would not actually reduce the impact on the deficit, nor the official cost estimate the Congressional Budget Office (CBO) would produce. Still, Republican support for reallocating these funds to new uses suggests openness to a package of nearly $600bn, slightly larger than the prior Senate Republican proposal of slightly more than $500bn. According to Goldman, the need to compromise with congressional Democrats and the incoming Biden Administration would likely push this total up slightly, to around the $700Bn the bank expects.

Bottom line: Nancy Pelosi’s stubborn unwillingness to compromise with either Senate or White House negotiators, and trim her “ask” from $2.2TN to the upper $1TN’s, means that Democrats are now facing a dramatically reduced stimulus, which in turn would have substantial consequences for net treasury issuance in 2021 (the Treasury already has access to some $1.6 trillion in cash mostly from Bill issuance), and potentially for stocks – which continue to expect a “major” stimulus – as well as the broader economy, which will continue to suffer as the tailwind from the massive stimulus passed in early 2020 wears off. In fact, one could argue that without a sizable stimulus, and with very likely delays in implementing nationwide covid vaccines, the GDP contraction in Q1 which JPM already expects in its base case, will only get worse in Q2 and eventually devolve into a full-blown double-dip depression.  What Congress does then will depend on just how vindictive a Republican Senate at that time with an ostensibly democrat administration.

Of course, if Goldman is right and if Congress is indeed neutered, this means that the market will shift its expectations for a major stimulus to come from the Fed instead, with traders already expecting a doubling in QE some time in early 2021 so the central bank can monetize all the $2.4 trillion in net issuance in 2021.

But for that to happen, a new “crisis” will first have to take place as we explained last weekend…