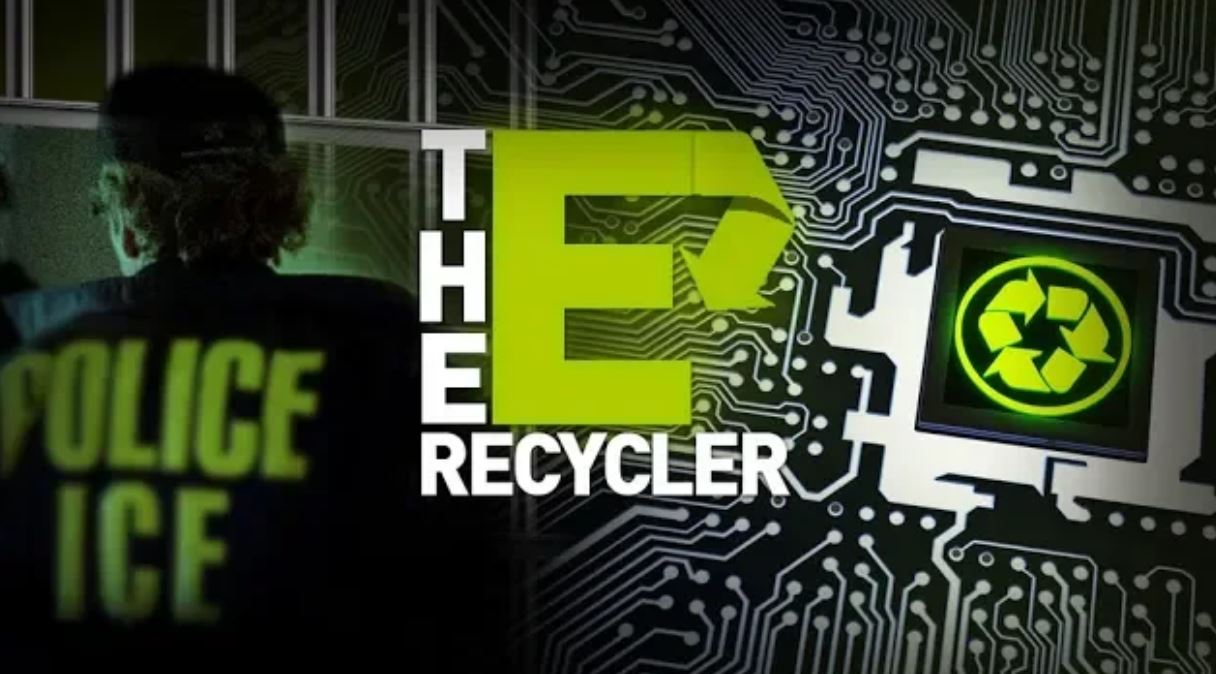 Ingredients needed to make digital, electronic, and wireless devices and infrastructure are often referred to as “Conflict Minerals” because of their devastating environmental and humanitarian costs which include massive amounts of toxic Electronic Waste being added to landfills.

Earlier this year the U.N. warned that 82% of E-Waste is NOT being recycled (see 1, 2, 3).  Fortunately, one American innovator is changing that.

Our cover story today is an amazing update on one of the most interesting people we have profiled here on Full Measure, Eric Lundgren, whose work recycling of toxic electronic waste made him famous. But when Lundgren crossed wires with powerful interests, he became the first e-waste recycler to be sent to prison. Wait until what you hear about the innovative company he started while behind bars and what he’s done since.

Eric Lundgren: Funny enough there is cable news in prison, and there is a TV room, right?. And I was in the TV room, and you popped up and it happened to be the interview that we did. It was inspirational for me to remember my mission especially in a time when you just feel like, the lowest you can possibly feel.

Lundgren (2018 interview): No case like mine has ever been handled criminally ever in the United States.

This is the interview Lundgren saw on Full Measure

Sharyl(2018 interview): You’re going to prison in just a couple of days?

The one he gave me right before he reported to prison in 2018. We spoke through a computer link because we were on opposite coasts.

Eric Lundgren (2018 interview): I’m going to prison in five days for a crime that I don’t think is truly a crime.

By 2017, Eric Lundgren and his recycling company were well known in the e-waste world. His company famously built an electric car from recycled trash — and set the record for traveling farthest and fastest on a single charge, even beating out a Tesla. But he landed in legal trouble after planning to distribute thousands of Windows disks to restore old Microsoft computers. Microsoft provides the disks for free, but accused Lundgren of violating copyright laws. Federal agents burst into his home, guns drawn, and he was charged with 21 federal crimes.

Sharyl (2018 interview): What did the prosecutors say you had done wrong?

Lundgren (2018 interview): The prosecutors said that I had inherently, potentially, taken a sale from Microsoft of a new operating system with a new license by helping consumers to repair their existing technology. His exact words were, “Microsoft wants your head on a platter, and I’m going to give it to them.”

Lundgren pleaded guilty to violating copyright laws usually a civil violation. But he was sentenced to 15 months in federal prison.

Lungren: Why did I go to prison? I got in the way of the 20th largest company in the world. They have a business model. It’s built around you using, consuming and throwing away. And I believe in reuse.

At the time, Lundgren promised to amp up his e-waste recycling efforts. Now, after a year in prison, he’s out and showing off what he built behind bars. His company, BigBattery.com, is being watched by industry analysts who see it as an innovative pioneer.

Sharyl: Can you characterize e-waste, what it is and what makes it in your view such a terrible problem?

Lungren: Well, e-waste is responsible for 70% of the heavy metals in our landfills. We think that when we throw it into a trash can, somebody else deals with it because we’re paying for that service, but nobody is. Like Neanderthals, it’s going into a landfill, literally being dumped in the dirt and buried, and it’s leaching harmful chemicals like lead, cadmium, mercury, bromine arsenic, into our water table, into the food that we eat, the water that we drink and in some countries where they burn it, the air we breathe.

It’s estimated Americans throw away $55 billion of e-waste a year. Only a fifth of that is recycled. And Asia has become a dumping ground for trashed electronics. Workers there, sometimes children, get exposed to toxic materials during crude handling to reclaim copper and gold. Lundgren aims to short circuit the hazardous flow.

Lundgren: Recycling and hybrid recycling is good for the environment and good for people.

Lundgren’s giant warehouse is in Chatsworth, California just outside of Los Angeles. It’s energized by technicians turning used batteries into new modules that can power most anything.

Sharyl: So you recycle these when they’re done with the Tesla or how do you?

Lundgren: Tesla basically doesn’t have a re-use program. They sent all their batteries to recycler, who sent them overseas. We bought them all up and we took them out of the cars. I got a video of it and we processed 100 container loads of these batteries.

This is trash to society, but inside the batteries are still good. The batteries are good for another 15 years. But in a car, they’re not good at all but they’re great for powering a home or solar power or battery backup in case the power goes out or stabilizing our grid. Over here, these are what we extract from these giant modules here. You have 3000 Nissan Modules here and what we’re extracting out of them are these guys right here, you can hold one. They’re safe.

Lundgren: Heavy. Yeah. That is a Nissan Gen2 Module, 250 watt hour. And two of these can power a motor on a boat. Six of these can power your golf cart farther than six lead-acid batteries. And we put 48 of those in our power units that power the lights here.

Another common source of battery trash is electric scooters. They may break down or be recalled perfectly new but the batteries inside them last close to a decade.

Lundgren: We did 40,000 E-scooters. That’s what all these are and all these right here.

Sharyl: You mean taking used ones?

Lundgren: I mean taking new ones that were never used and were destined for a landfill and then buying them all up.

Sharyl: They’re just going to get rid of it? Why are they getting rid of brand new ones?

Lundgren: It’s America. We love to consume. For whatever reason they were getting rid of them and we saw an opportunity to buy them all, refurbish them and provide scooters to the public at half the price of manufacturing. They were liquidated very quickly. We had 40,000 plus, and I think we have probably 4,000 or 3000 left.

Lundgren: It’s like a generator. It’s like a battery generator and instead of costing $4,700, this costs $900. It’s affordable for anyone.

When Coronavirus hit, it threatened to kill Lundgren’s growing company. But he kept his 50 employees at work by pivoting into an essential business instead of closing.

Lundgren: What we did instead was we started importing all of these face masks, 13 million. We imported 14 million of these 75% alcohol wipes. People were charging crazy amounts. They were selling these masks for $7 and we were selling them for 50 cents. And when people said, “What’s wrong with your masks?” I said, “No, they’re the exact same thing FDA approved. CE approved. The difference is we’re not cutting a profit. Here you go.”

Besides the hazards of disposing of e-waste, making replacements also has environmental costs.

To build computer and monitor, it takes 1.5 tons of water, 48 pounds of chemicals, and 530 pounds of fossil fuels. For every 1 million laptops recycled, it saves enough energy to power 3,500 homes for a year. Lundgren’s work is so groundbreaking, it’s hard to accurately track how much of the e-waste recycling industry he’s capturing or even how big that industry is. But with amount of global e-waste growing, Lundgren is also expanding. He’s opened facilities now in Singapore, Hong Kong and Mexico.

Lundgren: Where I’m going with this and where we’re at today, it’s not enough. We’re great at consuming. We’re great at marketing. We’re great at using, and we’re great at throwing things away. But, that reverse logistics, that last little piece to have a closed loop so that we have a sustainable society. That’s where we need to work on. That’s what’s going to allow us to evolve. So until that’s handled, I am not done.

Sharyl (on-camera): By the way, Lundgren says his company would have been eligible for $276,000 in assistance under the Covid business rescue package to help his business and employees, but because he’s a convicted felon, he is excluded.