Will there finally be charges against the Russiagate conspirators — or is this another head fake?

The AP is reporting that John Durham has been presenting evidence in front of a grand jury:

John Durham, the federal prosecutor tapped to investigate the origins of the Russia investigation, has been presenting evidence before a grand jury as part of his probe, a person familiar with the matter said Friday.

The development is a potential sign that Durham may be mulling additional criminal charges beyond the one he brought last year against a former FBI lawyer who admitted altering an email about a Trump campaign aide who’d been under FBI surveillance. Durham is also expected to complete a report at some point.

The Wall Street Journal reported earlier Friday that Durham was presenting evidence to a grand jury and contemplating possible charges against some FBI employees and others outside government. A person familiar with the matter, who was not authorized to discuss it by name and spoke on condition of anonymity, confirmed Durham’s use of the grand jury to The Associated Press.

The Durham probe has had one indictment so far.

Kevin Clinesmith, a former FBI lawyer, pleaded guilty to altering an email for a FISA warrant.

Kevin Clinesmith, the former FBI lawyer who pleaded guilty to altering an email that he used to apply for a FISA warrant against former Trump-campaign adviser Carter Page, was sentenced to 12 months probation and 400 hours of community service on Friday.

In August, Clinesmith pleaded guilty to “one count of making a false statement within both the jurisdiction of the executive branch and judicial branch of the U.S. government, an offense that carries a maximum term of imprisonment of five years and a fine of up to $250,000.”

Clinesmith’s is the first criminal case to arise from now-Special Counsel John Durham’s probe into the Trump-Russia investigation.

In a court filing last month, Durham asked the judge to sentence Clinesmith to a prison sentence of up to six months — a jail term “between the middle and upper end” of the recommended sentence for the crime of making false statements in writing.

George Papadopoulos, one of the targets of the Deep State, predicted the report will drop this summer.

He is also confident in the Durham probe saying that “Durham is very real.”

George: My opinion is that Durham is very real… I know who he has interviewed in October 2019. Specific guys with the U.S. intelligence community that should not have been meeting with me, this infamous Australian diplomat, we know he’s spoken to the Italians, to various governments. He has been working non-stop since 2019 where I think he got all the juicy info back then. Then Barr appoints some special council a month before Biden goes to the White House, and now Durham is simply, in my opinion like I said I don’t talk to Durham, he’s waiting for the right moment to expose what he has learned and I think it is going to be tantamount to conspiracy in the Obama Administration. I truly believe that. I think he is incredibly real and I would actually put my entire reputation on the line saying this… It’s going to be very interesting to see when and how that information comes out, how the media tries to deflect or cover it up.

Trump has released multiple statements wondering what is taking the Durham probe so long.

In his latest statement, he asked, “Where’s Durham?”

“Does everybody remember when we caught the Democrats, red-handed, SPYING ON MY CAMPAIGN? Where’s Durham?” – President Donald J. Trump pic.twitter.com/QQEnC9GQDq 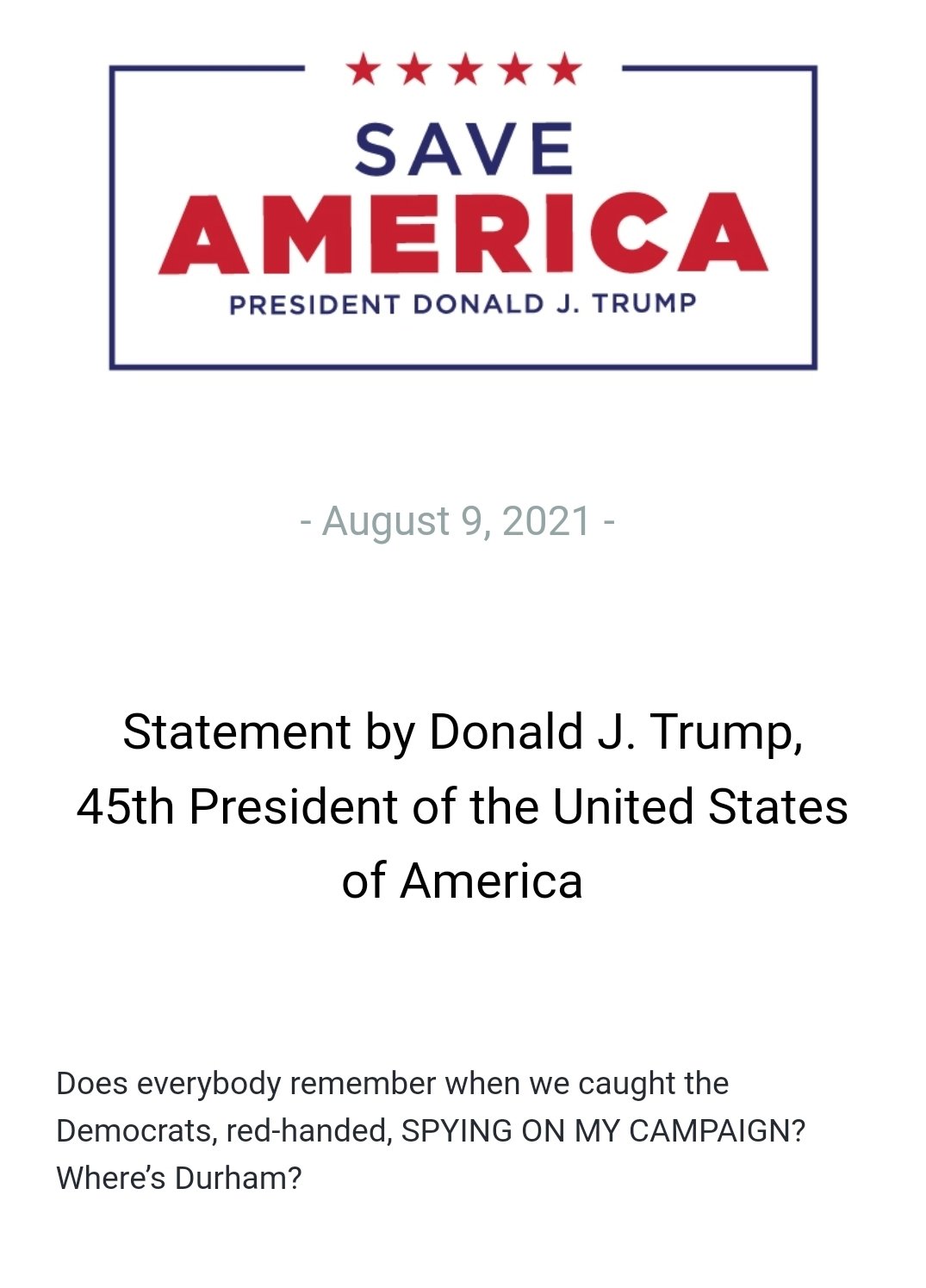