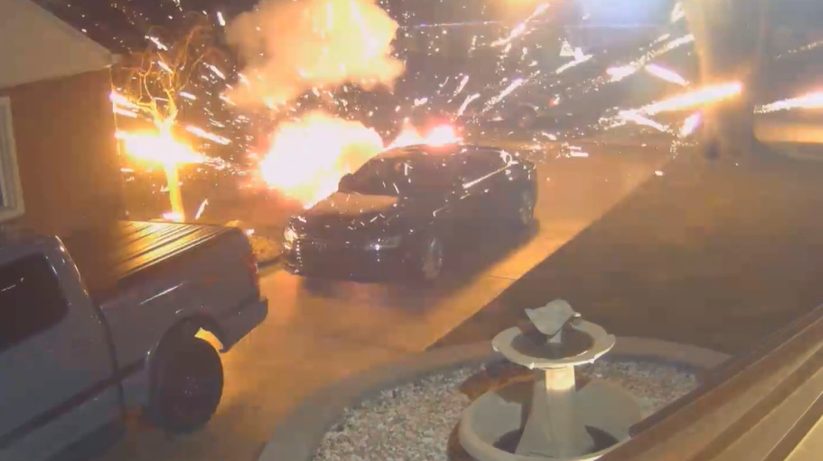 A Michigan homeowner says he was targeted in a middle of the night bomb attack which left a hole in his living room likely because he is a well-known Trump supporter. He also has multiple pro-Trump signs and banners on his front yard.

Police and media have interviewed the St. Clair Shores resident, just outside of Detroit, after the bombing was caught on tape. He wishes to remain anonymous for fear of further reprisal as police investigate.

It happened just after midnight early Saturday morning and shook the house in what was initially thought to be a massive transformer explosion.

After hearing two loud booms his neighbors also “thought a bomb went off” according to a local FOX affiliate:

“We came out and there was a big mess here,” the homeowner told reporters. “Everything was smoking and I got on the phone and called 911 and they showed up pretty quick.”

Thankfully no one was hurt, but media footage showed significant damage to the front of the house, clearly suggesting a powerful detonation, perhaps one or more pipe bombs.

“We’re thinking maybe because I’m a big Trump supporter,” the man underscored. “I mean everyone has people that don’t like them… but not to the extent of trying to blow my house up.”

Watch below: FOX 2 obtained security footage of a man running up to the lawn and throwing a device through the front window, after which there’s a massive blast and debris flying into the street:

“Smoke was filling the house,” the homeowner said. “I went up told her to get out the house, ‘Grab the dog and get out of the house.'”

That’s what the homeowner said he experienced early Saturday morning after hearing not one, but two loud booms. We’re not identifying him, due to safety reasons.

“We were really scared. I mean when you feel your house shake and explode and smoke, you don’t know what’s going on,” he added.

He further described that someone tried to kill him that night as the bombing was meant to set his house on fire with him in it.

The second device was placed in an apparent attempt to blow up a car parked in the driveway, based on surveillance footage:

Currently what’s very likely a politically-motivated terror attack has been ignored by the vast majority of the major mainstream networks and large media outlets, with the exception of Fox News.

“This sure looks like domestic terrorism,” one prominent media commentator and radio host said.

Local media coverage shows the resident has a large Trump 2020 “F*ck Your Feelings” banner attached to a front fence.

However, given the victim is a self-described avid Trump supporter, we don’t expect mainstream media and political leaders to treat it as such. Certainly if the story were flipped it would be receiving wall-to-wall national coverage.