For a minute there, it looked like Goldman Sachs might steal Deutsche Bank’s crown as the most felonious bank on Wall Street. The massive penalty Goldman paid to resolve criminal proceedings tied to its role in helping a gang of corrupt plutocrats ransack a public development fund erased the fruits of a “blockbuster” quarter.

But out of nowhere, it looks like Deutsche Bank, which racked up more than $20BN in fines in the decade after the financial crisis, has emerged to defend its throne. To wit, The New York Times reported Friday that Deutsche Bank is expected to shell out $100MM to settle criminal charges that the bank bribed Chinese officials for business in the country. Bribing foreign officials to win business or access is a blatant violation of the Foreign Corrupt Practices Act.

The NYT added that the settlement would be, for Deutsche Bank, the latest black eye tied to its business in China and Russia. Back in 2019, the bank agreed to pay the SEC $16MM to resolve allegations that it bribed officials to win lucrative business deals. It looks like the settlement is tied to an investigation first reported by the NYT back in 2019. In the story, the NYT detailed DB’s long history of lavishing top Chinese political figures and their family members with lavish gifts. As the NYT reported at the time, it was all part of DB’s plan to break into the Chinese market.

A graphic published by the NYT details the web of top party officials connected to Wen Jiabao, China’s Premier between 2003 and 2013, and his wife and children. 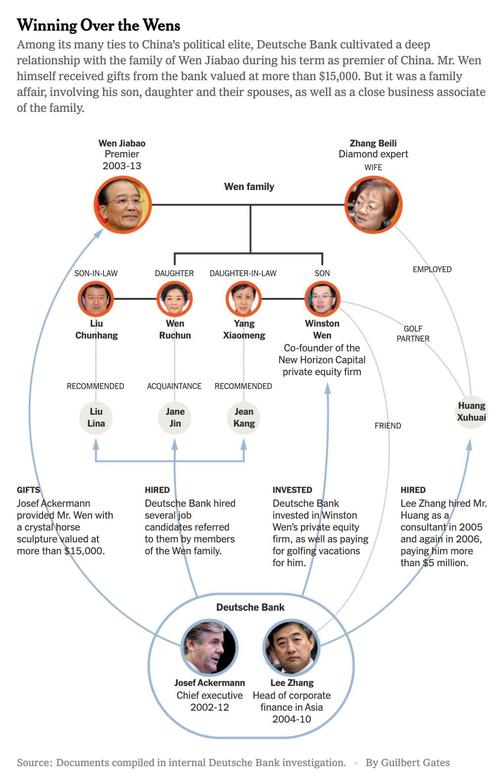 The lavish gifts included a crystal tiger (modeled after the recipient’s Chinese zodiac sign). For what it’s worth, the bank’s efforts paid off, and by 2011, it had made significant inroads into China.

The bank gave a Chinese president a crystal tiger and a Bang & Olufsen sound system, together worth $18,000. A premier received a $15,000 crystal horse, his Chinese zodiac animal, and his son got $10,000 in golf outings and a trip to Las Vegas. A top state banking official, a son of one of China’s founding fathers, accepted a $4,254 bottle of French wine – Château Lafite Rothschild, vintage 1945, the year he was born

Millions of dollars were paid out to Chinese consultants, including a business partner of the premier’s family and a firm that secured a meeting for the bank’s chief executive with the president. And more than 100 relatives of the Communist Party’s ruling elite were hired for jobs at the bank, even though it had deemed many unqualified.

This was all part of Deutsche Bank’s strategy to become a major player in China, beginning nearly two decades ago when it had virtually no presence there. And it worked. By 2011, the German company would be ranked by Bloomberg as the top bank for managing initial public offerings in China and elsewhere in Asia, outside Japan.

The NYT connected the strategy of bribing public officials to Josef Ackermann, DB’s longtime CEO, who left the bank in 2012. Ackermann was the mastermind of DB’s push into international markets in the US, Asia and elsewhere. It was this aggressive pursuit of growth at any cost that led the bank to do business with Donald Trump, who still owes DB $300MM tied to his Chicago tower.