By Talita Fernandes and Liam Anderson

In São Paulo, city authorities estimate that around 24,000 people are living on the streets, a number that is on the rise as more people find themselves without a job during the COVID-19 pandemic. In the midst of this crisis, Father Julio Lancellotti and his São Miguel Arcanjo parish have been distributing hygiene products and food rations to over 400 of the city’s homeless every day.

Lancellotti, who has been a priest for 35 years, has a large social media following and is well known for his work with juvenile offenders, people with HIV, the homeless, and LGBTQI+ communities.

However, this work has often put him in the line of fire. He has received death threats and has been the victim of attempted extortion. This past September, a state congressman campaigning for mayor in São Paulo called Lancellotti a “pimp of misery” and accused him of encouraging drug trafficking. His statements led to verbal attacks against the priest in the streets.

In 2017, when current President Jair Bolsonaro was a federal deputy representing Rio de Janeiro, he sued Lancellotti for moral damages after the priest called Bolsonaro “racist, sexist, and homophobic” during a religious address. Lancellotti won the case against Bolsonaro at the beginning of November 2020.

Father Lancellotti spoke with Global Voices by phone about his experiences and the challenges faced by Brazil’s poorest communities during the COVID-19 pandemic. 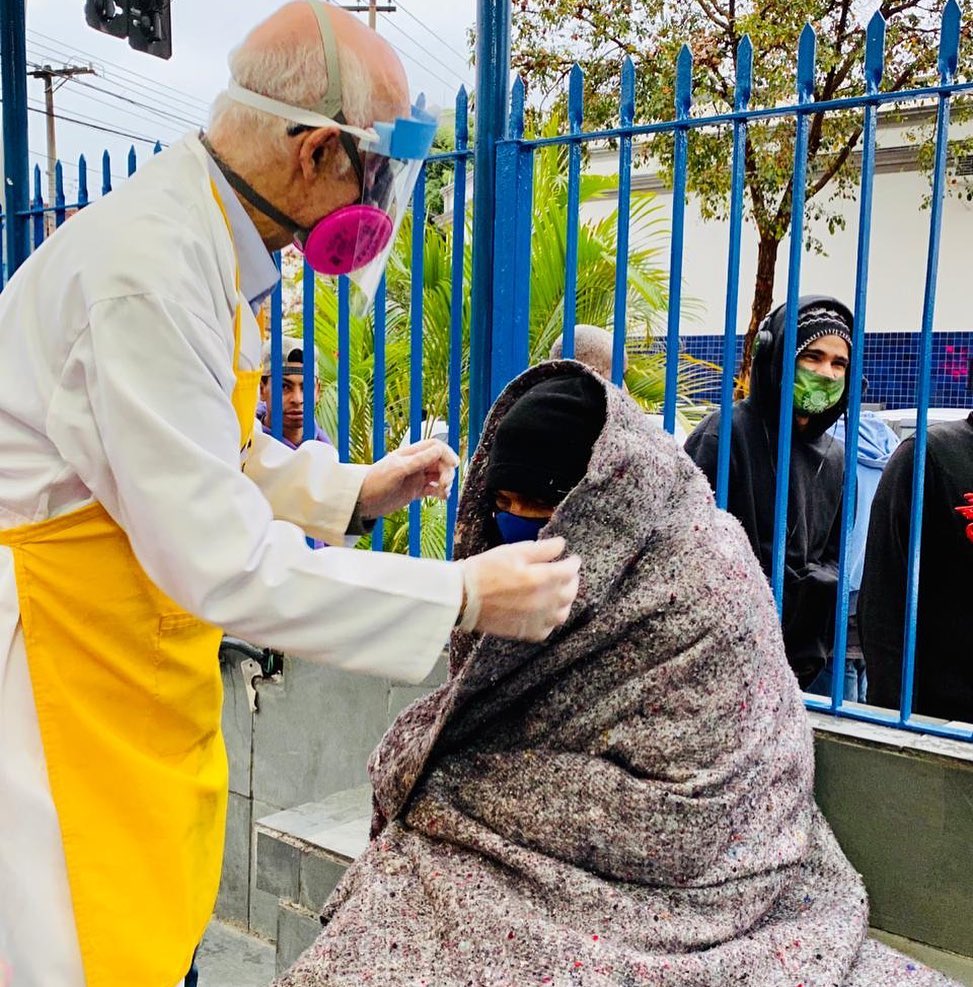 Father Julio Lancellotti attending to a person living on the streets who arrived in his parish cold. Photo: Publication/Used with permission.

Talita Fernandes (TF): You’ve been working with people on the margins of society. What motivated you to make this choice?

Júlio Lancellotti (JL): There is no specific reason. I have always lived with people on the street, and here in the Archdiocese of São Paulo we believe in the ideas of the Second Vatican Council and the ideas of Puebla, that is, a preference for the poor, for the streets. We create communities with people on the street. And I’ve made this journey from the beginning, about 30 years ago, when the Episcopal Vicariate of the People on the Street was created. And from then on, various groups came into being.

TF: Homeless people in Brazil are subject to violence and are at risk of being killed. Do you think these kinds of attacks have escalated as the country grows more politically polarized?

TF: In your opinion, what public policy should be a priority for homeless people in Brazil?

JL: There is no one single answer. It is complex, because housing is an important issue but work, health, mental health, and coexistence — everything that generates autonomy — are also important.  [In public shelters] there are times to enter, for leave, to eat, and all the decisions are made by others. Life has a routine, but this routine should not be decided for you, [it should be] based on your needs.

And there is also an aspect which is not taken into account: the emotional and sensual aspect. Many [homeless people] are young. When will they date, meet somebody? One day, I said this to some friars and they were a little shocked. I said “…friars take a vow of poverty, obedience and chastity, and it is the homeless who have to fulfil it. It is as if the streets were a great monastery and they — all the time — have to have all the qualities that we do not. They have to always be polite, always contained, always kind, always grateful, always considerate.”

Lancellotti working among some of the people aided by his church work in 2019 | Image: Publication/Used with permission

TF: Brazil is the seventh most unequal country in the world. What is the role of the church in relation to this social inequality?

JL: In my view, the role of the Church is to fight for the life of ordinary people, to defend the poor, to defend human rights. The Church’s mission is to evangelize, which means to bring good news to those who are suffering, to those who are blind, to those who are paralyzed, to those who are mistreated and in this sense, it is the Gospel itself. In Chapter 14 of Saint Matthew, Jesus, seeing a hungry crowd, proposes the Miracle of Sharing, which we call the Feeding of the 5,000. Actually, we should call it the Sharing of Bread. We live in a society of hoarding, not sharing and I believe that, with rising unemployment, we could get into a much worse social and economic situation, with spiralling increases in poverty.

TF: You say that a change in society is not just a matter of faith, but of humanizing life. What is this humanization mean for you?

JL: What I say is that solidarity is not something religious. It is something human. The humanization of life is ensuring that everybody has access to food, drinking water, work, a place to sleep, a home, autonomy. There is no humanized life without freedom. Can you imagine, as a woman, you only being able to wear second-hand underwear that somebody has donated to you? People must have free access [to things]. Life is made of choices, and the big choices come through the small ones. And the small ones shape the big ones. Sometimes people forget that they [those living on the street] have feelings, that they have emotions, that they have everything that every other human being has.

TF: With so many challenges, what motivates you to continue working alongside these people today?

JL: It’s faith. I don’t strive to win, I strive to be faithful.

Top image: Júlio Lancellotti (right) with one of the beneficiaries of the activities of St Michael the Archangel Parish, wearing a top referring to Sister Dulce, the first Brazilian saint | Photo: Publication/Used with permission.