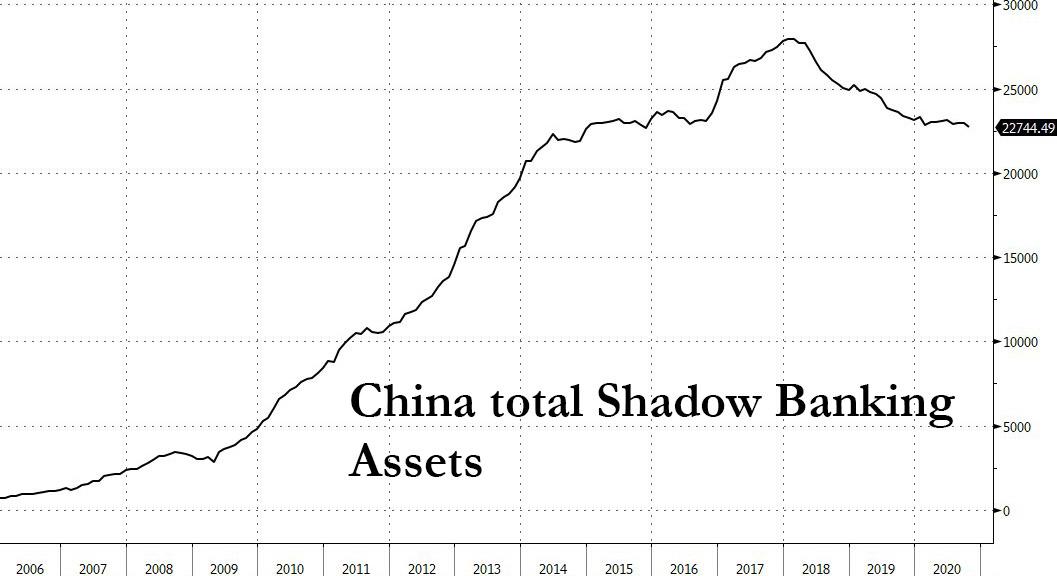 The wave of financial distress flooding China’s corporate sector, which has seen a furious selloff in bonds following the unexpected default of several state-owned enterprises, is spilling over into a key financing conduit used by China’s giant shadow banking sector — the trust industry.

As Caixin reports, Huaxin Trust Co. one of 68 companies licensed to conduct trust business in China and one of the largest “shadow banks” in the mainland , is trying to raise as much as 6.8 billion yuan ($1 billion) from strategic investors as it faces a growing liquidity squeeze that’s already forced it to skip repayments on dozens of investment products over the past few months.

But, as Caixin’s Timmy Shen writes, what drew the market’s attention was a condition stipulated by Huaxin that any investor would need to agree to “support the company’s liquidity before the completion of their investment to allow the firm to protect the interests of investors in its trust products.” And while this is tantamount to a pledge to backstop a bailout of the core shadow banking pillar, one veteran trust-industry source told Caixin that it can be difficult to persuade strategic investors to provide liquidity support before even making their investment, although investors can use this as leverage to get better terms.

Even before the current episode of corporate bond turmoil triggered by the sudden defaults of state owned Yongcheng Coal and Brilliance Auto, China’s regulators had already become increasingly concerned about the hidden risks in the trust sector which plays an key role in the shadow banking sector by providing loans to higher-risk companies and those who have difficulty getting credit from traditional banks. The loans are packaged into high-yielding products which are then sold to retail investors and institutions.

For half a year, China’s Banking and Insurance Regulatory Commission (CBIRC) has been preparing regulations to put the country’s $3.1 trillion trust industry under closer oversight. The draft rules, which were put out for public comment in May, will govern how trust companies manage client funds, clarify requirements on trust products and toughen regulation of their loan-related investments.

Then in June, as part of a wave of wholesale systemic deleveraging which hammered such real-estate development firms as China Evergrande and nearly brought it to the edge of insolvency, the CBIRC told some trust firms to downsize their trust financing business according to tailored specifications provided by the regulator. The unofficial orders from the regulator followed a surge in demand for loans as companies scrambled for cash to help them weather the impact of the Covid-19 outbreak or to repay maturing loans. We detailed China’s regulatory push to limit debt in October in “China Crackdown On Property Developer Debt Sparks Fears About Systemic Crisis” when we laid out the new “Three red lines” policy espoused by Beijing limiting the amount of new debt issuance.

Enter Huaxin Trust, which has around 20 shareholders, and is controlled by a Beijing-registered privately owned company called Huaxin Huitong Group Co. Ltd. whose low-profile chairman, Dong Yongcheng, holds a 9.1% stake in the trust firm, according to corporate data provider Qichaha. Huaxin Trust’s second- and third-largest shareholders are both linked to Dong’s company. Huaxin Huitong held a 60% stake in Huaxin Trust in 2015, according to a Hong Kong stock exchange filing by Shengjing Bank Co. which is based in the northeastern province of Liaoning and which was negotiating to buy a 20% stake in the trust firm for 3.2 billion yuan. The deal subsequently fell through.

Fast forward to today, when Huaxin’s hunt for investors comes as it has struggled to pay out on maturing trust products amid growing stress on its corporate borrowers. As of Thursday, the trust firm had only repaid four products that matured recently, and extended repayment on 23 products, with the earliest coming due in September, according to its website. Huaxin Trust said in announcements  on its website that enterprises had failed to repay the principal and interest on the products forcing the company to extend the repayment dates as allowed in the terms and conditions of the trust products sold to investors.

In essence, the repackager of high-yielding debt was pushing off blame on what may soon be a cascade of falling dominoes on companies it had lent money to.

The company also said  that in addition to looking for strategic investors it is speeding up efforts to offload some of its underlying trust assets and its own assets, adding that any money raised through these liquidations would be used to repay investors in its trust products.

In short, Huaxin Trust is the latest trust firm and “shadow bank” to run into trouble in a sector already reeling from the effects of a crackdown on shadow banking and an economic slowdown exacerbated by the coronavirus pandemic.  Among them are Sichuan Trust Co. which has failed to repay investors more than 20 billion yuan, and Shanghai-listed Anxin Trust Co. once the darling of the trust sector, which collapsed last year and was found to have a “modest” 50 billion yuan black hole on its books.

The total assets in China’s shadow bank sector have shrunk consistently since peaking in early 2018 as Beijing focused on aggressively limiting the amount of high-yielding debt issued by the sector.

However, with tens of trillions in yuan-denominated debt still outstanding within this loosely regulated offshoot of China’s financial system, which still represents a last-ditch option for liquidity-challenged companies, as China’s economy continues to shrink from the consequences of the pandemic regardless of the rosy and goalseeked data that Beijing is publishing on a monthly basis to convince the world – and China’s massive depositor base – that all is well, we expect after the initial round of early tremors to hit China’s trust companies such as Huaxin, the real shock to China’s financial system is yet to come.