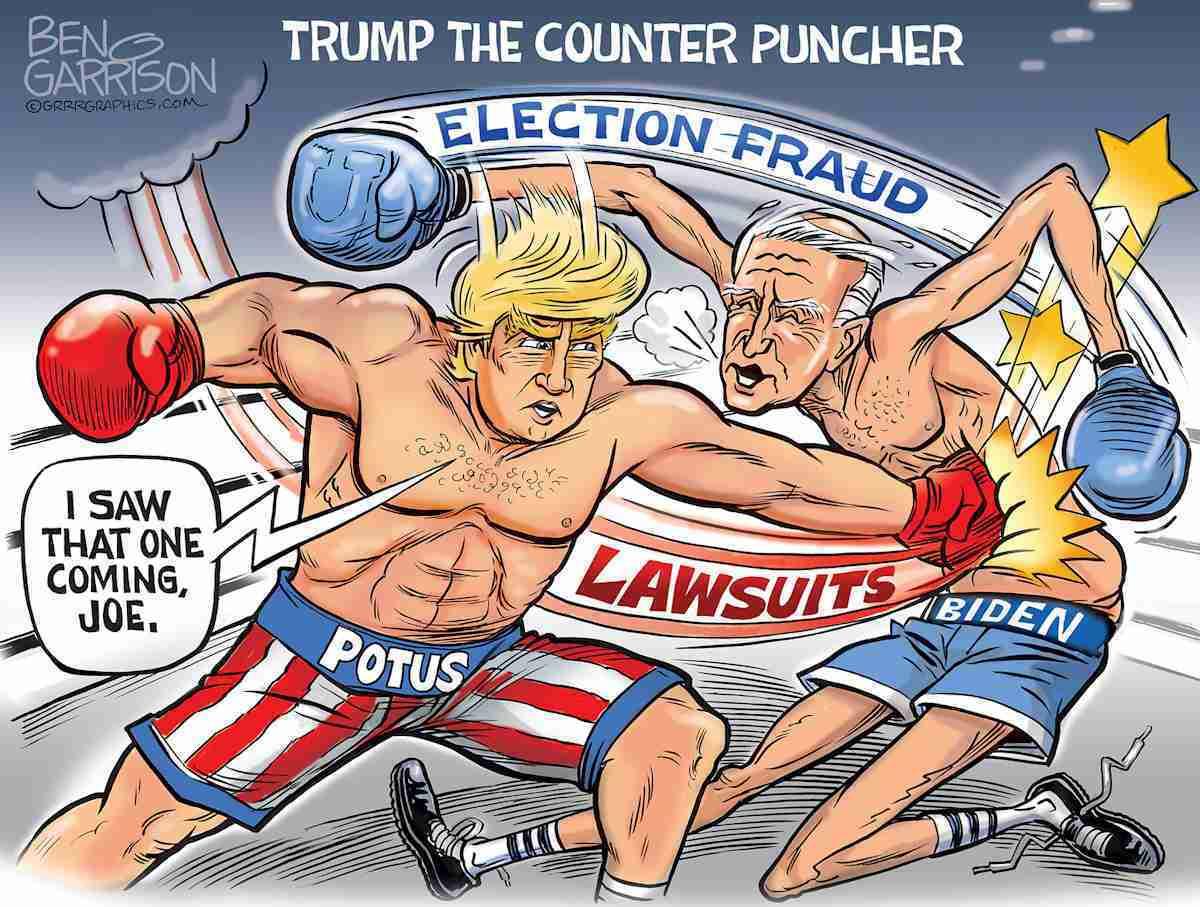 Authored by Patrick Buchanan via Buchanan.org,

“In victory, magnanimity… in defeat, defiance.”

That counsel about human conflict comes from Winston Churchill.

And President Donald Trump, given all he has endured for five years from those piously pleading now for a “time of healing,” cannot be faulted for his defiant resolve to unearth any and all high crimes or misdemeanors committed in the counting of ballots in the election of Tuesday last.

Trump owes his people this, and he owes the establishment nothing.

Yet, in making this his priority, Trump should be mindful of several realities. From what we have seen so far, the prospect that the decision in the battleground states of Wisconsin, Michigan, Pennsylvania, Nevada, Arizona or Georgia will be overturned does not appear high.

Indeed, it seems a certainty that not enough electoral votes could be flipped from Biden to Trump to overturn Joe Biden’s electoral vote victory.

And Trump should realize that in alleging fraud, he is creating an imperative upon himself and his team to provide the evidence to prove it.

In politics as in poker, there comes a time when you have to show your cards or fold your hand. Are the cards there?

Trump should also be aware that his reputation, the causes he has served, and the future of both, will be influenced by how he conducts himself in what appears to be an inevitable defeat.

Richard Nixon, in the 1960 election against JFK, declined to challenge the returns from Illinois, which he lost by 9,000 votes, though journalists then and historians have contended that the state was almost surely stolen in Cook County.

Nixon chose not to challenge the Illinois count.

Among the reasons was that, even had he done so successfully, after a brutal battle like the Bush-Gore contest in Florida, and even had Illinois been shifted into his column, he would have been short of the 270 electoral votes needed to win.

Nixon would have had to contest and flip Texas as well.

Also, while Trump and his campaign are devoting time and resources to the ballot count in battleground states, a last crucial battle is shaping up in Georgia, where the stakes are second only to the presidency.

Schumer was referring to the two Senate races that will be decided Jan. 5, both runoffs where none of the four candidates got the Georgia-required 50.0% of the vote on Nov. 3.

Republican Sen. David Perdue won 49.7%, just short of the 50.0% that would have ensured GOP control of the Senate through 2022. Perdue faces a runoff against 33-year-old Jon Ossoff.

The other race is between Republican Sen. Kelly Loeffler, who is seeking to fill out the full term of Johnny Isakson who stepped down from the Senate in 2019 for health reasons. She is opposed by African American pastor Raphael Warnock.

What is involved in these runoff elections?

If Rossoff and Warnock both win, Democrats take control of the Senate. Schumer will be the new majority leader, displacing Mitch McConnell. And all tie votes will be decided by the new Senate President and Vice President Kamala Harris, who, as of 2020, was, by her voting record, the most radical member of the entire body.

What would this mean?

On Jan. 20, 10 weeks from today, Democrats would control the House with Speaker Nancy Pelosi in the chair, the Senate with Schumer as majority leader, and the White House with newly inaugurated Joe Biden in the Oval Office.

The sole residual power Republicans would retain is the filibuster, the right of extended debate, the capacity to block the radical proposals of the new Democratic majority dominant in D.C. by talking them to death.

Before the “Green New Deal,” “Medicare for All” and the Biden-Bernie tax hikes could be passed, before a trillion-dollar bailout of blue states like Illinois could be enacted, before the Supreme Court could be packed, the Senate filibuster would have to be eliminated.

But, if it were, we would be transported back to the days of 1965, when LBJ, with veto-proof majorities in both houses, rammed through his Great Society, the failure of which is manifest today in Detroit, St. Louis, Philadelphia, New York — and in our staggering national debt.

Are Democrats ready for so radical a step? Indeed, they are. Even Barack Obama is calling for killing the filibuster as a “Jim Crow relic.”

Republicans who think that Democrats would not abolish the filibuster to advance their agenda are deluding themselves.

Yet, all that is needed to block this rising radical revolution is for the GOP to win one of the two Georgia Senate seats at issue Jan. 5.

If the Democrats lose either Georgia race, the Bernie-BLM-antifa-AOC revolution may just end up devouring its children.