Despite Emerging Markets’ recent surge higher on the heels of a dumping dollar and massive global liquidity injections, at least one country is facing crisis rather than crescendo. 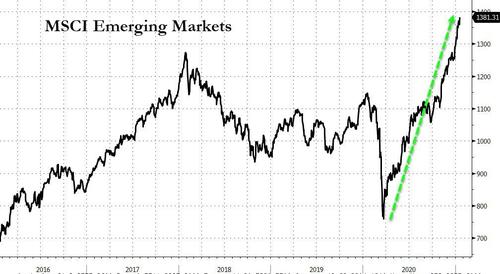 YPF, a 99-year-old oil company that some have called Argentina’s flaghship company, is threatening a large-scale default on its bonds after the central bank refused to let YPF buy the full amount of dollars it needed to pay notes coming due in March.

The last few months have seen the peso collapse (despite a weaker USDollar) to 86/USD – a record low – making the dollar-debt payments for Argentina’s corporations exceedingly expensive. 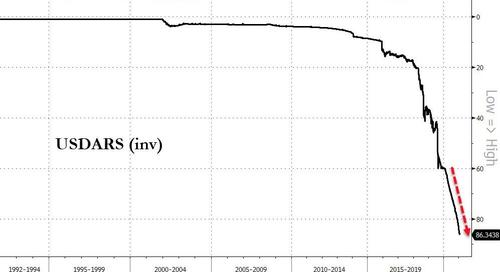 And that – along with the fact that global oil markets have collapsed – led YPF to send a press release in the dead of night laying out a plan to saddle creditors with losses in a debt exchange.

Implicit in its statement, as Bloomberg reports, was a threat that traders immediately understood – failure to reach a restructuring deal could lead to a flat-out suspension of debt payments – and they began frantically unloading the shale driller’s bonds the next morning. Today, some two weeks later, the securities trade as low as 56 cents on the dollar.

“The central bank’s decision really put YPF between a rock and a hard place,” said Lorena Reich, a corporate-debt analyst at Lucror Analytics in Buenos Aires. 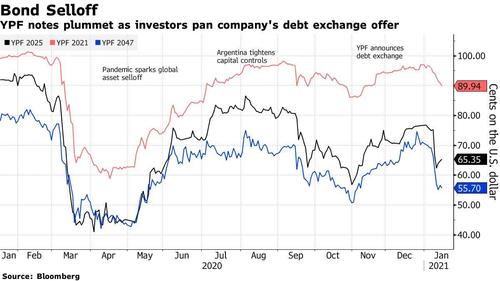 Argentina’s cash crunch couldn’t come at a worse time for YPF, which was already facing a drop in demand because of the pandemic.

The task is even more urgent as the South American winter approaches with YPF unable to meet domestic gas demand, meaning Argentina will have to boost imports – and fork over precious hard currency – in the middle of a global spike in prices.

But, as Bloomberg notes, the central bank’s refusal to sell YPF the dollars it needs to pay its obligations, despite the company’s earlier efforts to refinance its short-term debt, is a bad sign for all overseas corporate bonds from Argentina, according to the financial services firm TPCG.

The concern is that if the country’s flagship company isn’t eligible to buy dollars at the official exchange rate as the bank seeks to hold onto hard-currency reserves, no one else will be either.

And this, among other reasons, is why The Fed must keep injecting dollars into the world… or face this kind of crisis from DMs as well as EMs.