An America With Two Presidents 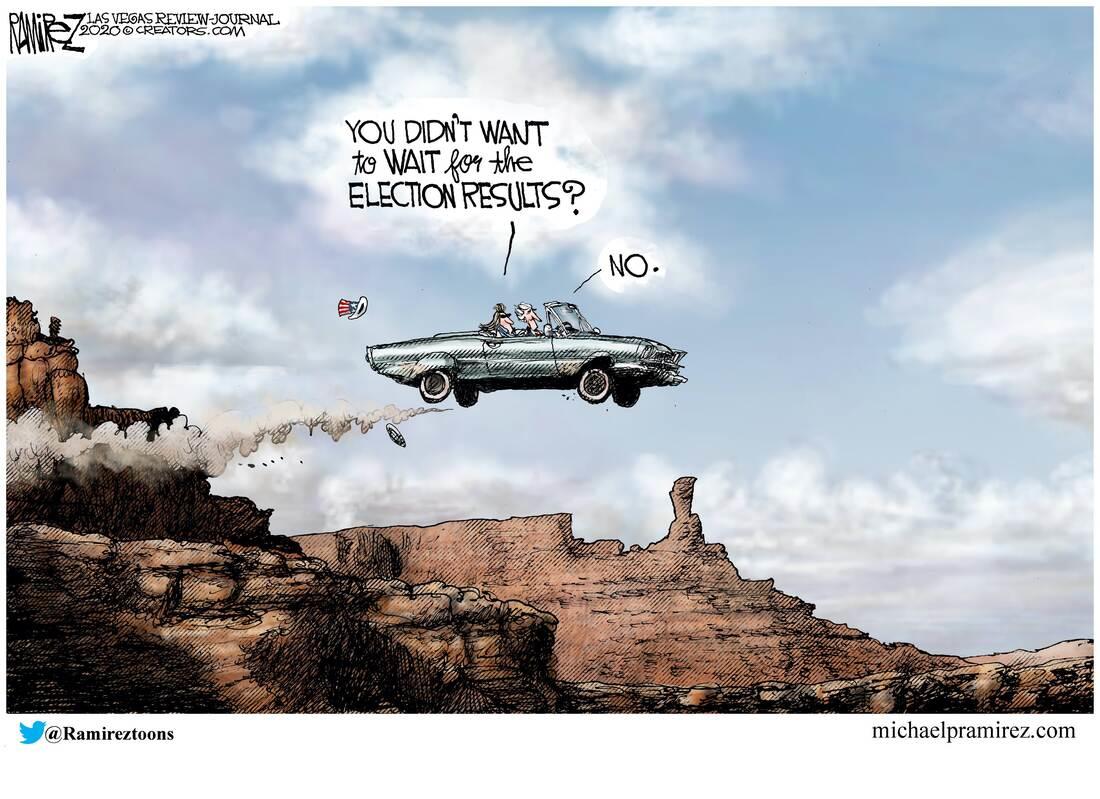 Authored by Tho Bishop via The Mises Institute,

In the aftermath of Election Day 2020, ballots continue to be counted, states remain undecided, and party lawyers are dreaming about where to invest their upcoming billable hours. One thing we can count on, America’s political institutions are about to face a unique and fascinating challenge to their legitimacy.

For those who have better things to do than closely following late-arriving ballots in swing states, here is where things stand right now:

Joe Biden is poised to be able to claim victory in the election as blue ballots continue to trickle in from high-density urban areas in states like Pennsylvania, Nevada, and Georgia. At the same time, Donald Trump’s team continues to project confidence about Arizona swinging red and counting on military absentee ballots to make up any ground lost in the Peach State. Meanwhile, online sleuths are churning out anecdotal evidence of possible voter fraud and highlighting statistical anomalies in certain vital Democrat areas. As of Friday, they were even still allowed to talk about it on Twitter.

The confusion surrounding this election obviously evokes flashbacks to the Bush-Gore debacle of 2000. To Joe Biden’s advantage, Al Gore was dealing with a Republican state government at the time. Now, most of the states in question have a firmly blue state government, while most of the high-density urban areas are obviously governed by Democrat-controlled machines (none of which are particularly known for either competency or integrity).

Of course, even suggesting that partisan government officials may have more loyalty to their party over the civil religion of “democracy” is outrageous in the eyes of the corporate press.

Luckily, one of the major takeaways of the 2020 election is just how little the public actually thinks of America’s punditry class. After all, five years of nonstop stories about the sexist, white supremacist, unhinged Donald Trump gave rise to the most diverse political coalition the Republican Party has seen since 1960. The only demographic Trump underperformed relative to 2016 was white males. Oddly enough, the Left is not concerned with the privileged white patriarchy.

So where does that leave us?

If we assume, as we should, that the legal system inevitably leaves us with a Joe Biden inauguration, the next few years could be very interesting indeed. America will have a former president, deeply beloved by a base that stood out in the freezing cold past midnight in the tens of thousands during the campaign, who is not likely to go quietly in the night. Would it surprise anyone if Donald Trump boycotts a Biden inauguration? If so, is it possible he would hold a competing rally at the same time the forty-sixth president was being sworn in?

Does anyone doubt the attendance he would draw?

After all, regardless of the legal outcome, America is about to find itself with a president that will be viewed as illegitimate by a large portion of the population—and perhaps even the majority of some states. There is no institution left that has the credibility to push back against the gut feeling of millions of people who have spent the last few months organizing car parades and Trumptillas that their democracy has been hijacked by a political party that despises them.

To his credit, Joe Biden isn’t blind to what he is inheriting either. His problem is that a half century in politics has him out of touch with the America that actually exists. It is likely that Biden will stress bipartisan unity in his administration—a move made easier by the fact that he will need moderate Republicans more than the far-left caucus of his own party. In the past, America’s most hotly contested elections were decided with backroom deals among party bosses. Non-Trump Republicans are currently figuring out their price for standing with Joe Biden over their 2020 nominee.

It would not be surprising to see a Biden administration feature names like Bush, Kasich, or Flake. The problem is that this style of bipartisanship is as dated as the West Wing. The Left and Right want their sides to rule and dominate their enemies, while the center is more motivated by disgust of both sides than the desire for them to just get along.

If this is correct, the Biden administration will end up being precisely what the nonhysterical left always feared: the restoration of a neoconservative-neoliberal uniparty.

Adding to the chaos is the fact that Donald Trump will now be free of the burdens of responsibility that come with governing. America’s forty-fifth president will have the ability to do what he most enjoys: sit back, watch cable news, and start firing away from @realDonaldTrump. That is, of course, until he is predictably deplatformed by Jack Dorsey for being a threat to national unity.

Of course, blowback is not limited to foreign policy blunders by the American empire. Every attempt by those in power to silence Donald Trump going forward will have consequences they are not prepared to deal with.

For example, the second Donald Trump is forced to use a competing social media platform, the concerns about tech monopoly may begin to seem antiquated. Better still, a Trump news network seems inevitable—either built from scratch or by adopting one of the standing second-tier conservative options that currently exist. We can be sure that Donald Trump will never forgive the Murdochs for calling Arizona so quickly on Tuesday.

The majority of America’s mediocre elites residing in Washington and New York City are going to take a Joe Biden presidency as a repudiation of Trumpism. The massive increase in his support suggests otherwise. Their blind arrogance ensures that the anger felt by the masses that brought President Trump to power in 2016 will not go away.

As Ludwig von Mises understood, there are inevitable limitations to a state if the public does not view its leaders as legitimate.

Only a group that can count on the consent of the governed can establish a lasting regime. Whoever wants to see the world governed according to his own ideas must strive for domination over men’s minds. It is impossible, in the long run, to subject men against their will to a regime that they reject.

A Joe Biden presidency may be imposed on red America, but the establishment of old will never be able to persuade the Make America Great Again movement that he is their leader. Thanks to Donald Trump, a large portion of the US are likely to view themselves as the enemies of America’s next president.

Which brings us back to the most fundamental question of modern American politics: What do you do with political orders that no longer serve the interests of their people? How do we treat politically vanquished people who just aren’t going away?

Luckily, there is no reason to fear an economic crisis any time soon… Such an event might really make things interesting.